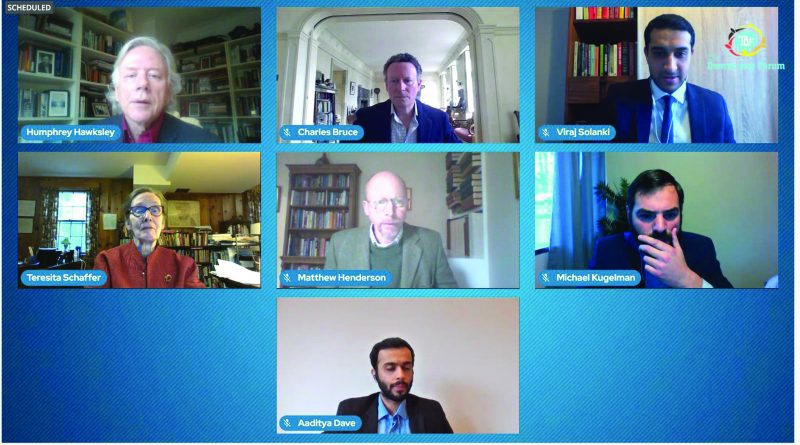 A recent virtual seminar reflected on the US-India partnership, and the challenges that lie ahead as they attempt to preserve democratic norms in South Asia and beyond.

America’s relationship with India is central to its Indo-Pacific policy, raising a key question as to whether Delhi could ever be a reliable pillar within the growing security alliance against Chinese expansion.

February’s Democracy Forum debate flagged up a range of challenges, not least India’s close relationship with Russia and the differing views of values and democracy in North America and South Asia.

The Democracy Forum president, Lord Bruce, opened by explaining the long experience President Biden has with India. Together with Vice-President Kamala Harris, this depth of knowledge is bolstered by more than 20 senior officials from the Indian-American diaspora working in the new administration.  Lord Bruce reminded participants of President Biden’s statement from 15 years ago: ‘My dream is that in 2020, the two closest nations in the world will be India and the United States.’

It then fell to Aaditya Dave from the Royal United Services Institute to flag up points of friction. First on the list was Russia, which Biden had described as a ‘threat’ against the quieter language he was using for China, which he saw as a ‘competitor’.

Delhi’s security arrangements with Moscow began in 1971 when the US sided with Pakistan during Bangladesh’s War of Independence. ‘A proliferation of Russian military equipment into India’s armed forces continues to this day,’explained Dave.

He went on to underline the difference in values between India and the US. India’s ‘relative silence’ on Indo-Pacific flashpoints such as Myanmar, Xinjiang and Hong Kong lay in contrast to open condemnation coming from Washington and other Western capitals.

Viraj Solanki from the International Institute of Strategic Studies also argued that India and the US would have to ‘work hard to maintain and strengthen the bilateral defence and security relationship – mainly because of Russia’.

Specifically, the 2018 deal for India to buy Russian S-400 surface-to-air missiles raised US alarm bells. There was also concern about technology transfers.

Solanki noted, however, that American weapons sales to India had increased substantively from $200 million in 2000 to more than $21 billion in 2020.  In the past five years, the two governments had also signed two substantive defense agreements.

However much Washington wanted to construct a formal military partnership, Solanki argued that India would never give up its autonomy on defence procurement. The strong Russian relationship would continue.

Sinologist and former British diplomat Matthew Henderson was forthright on the challenge posed by the Chinese Communist Party, which he described as implementing ‘a Marist-Leninist national roadmap for global domination’.

‘The goal is victory over liberal democracy,’ Henderson argued. ‘Stronger practical cooperation between India, America and our allies in defence of freedom and democracy is essential. Beijing sees India as one of its most significant rivals. The revival of democracy now needs active support from all the nations across the free world who benefit from it.’

Michael Kugelman, the Deputy Director of the Asia Program at the Woodrow Wilson Center in Washington D.C. argued that the US-India relationship was driven more by shared interests than shared values. Therefore, the Biden administration would be selective on which countries it calls out on democracy and human rights violations.

‘India is perceived, rightly, to be a very important partner of the US,’ Kugelman said. ‘The administration, I think, will be relatively easy on it, it will not condemn India harshly in a way that it will lambast China or Saudi Arabia or Russia.  It will not want to risk antagonising such an important partner.”

Kugelman added, however, that Democrats within the US Congress may not be so reticent and might openly criticize India on its human rights record.

Ambassador Teresita Schaffer, a Senior Advisor at McLarty Associates and a former Deputy Assistant Secretary of State for South Asian Affairs, brought historical perspective with her wealth of South Asia experience, having served as a US diplomat in India, Pakistan and Bangladesh and as Ambassador in Sri Lanka.

She spoke about ‘wide swings’ in the India-US relationship, from the positive 1959 visit by President Dwight D. Eisenhower to the negative onset of hostilities in 1971 over the birth of Bangladesh. Then, in 2008, came the breakthrough nuclear deal that allowed cooperation between the two governments after a 30-year moratorium.

Ambassador Schaffer underpinned an argument made earlier by Kugelman, pointing out that the concept of democracy could be a ‘complicating factor in managing the relationship’. She noted that the phrase ‘non-alignment’, used to describe India’s place on the world stage, was being superseded by a new one – ‘strategic autonomy’

And it was not only close ties with Russia that were problematic. ‘India wants to maintain decent relations with Iran, which is an important supplier of oil to an energy-short India,’ she said, concluding that the India-US relationship was ‘going to require a lot of work as far as the eye can see’.

Barry Gardiner MP, Chair of The Democracy Forum, summed up by reminding participants of the debate’s title, noting that democracy remained vibrant in both India and America.

‘We have had the largest democratic turnout in American history, 66.7 per cent of the US electorate voted, the highest level for a winning candidate and the highest ever for a losing candidate,’ he said.

‘And India had the highest ever turnout, 67 per cent, and the largest democratic victory there, I don’t know, for how many years.’

But he cautioned that Hindu nationalism was changing how India was dealing with its own democratic secular constitution. In a similar way, America democracy was swayed by an ‘incredibly polarised electorate’.

In both countries, democracy was alive and well, but it was fragmented.