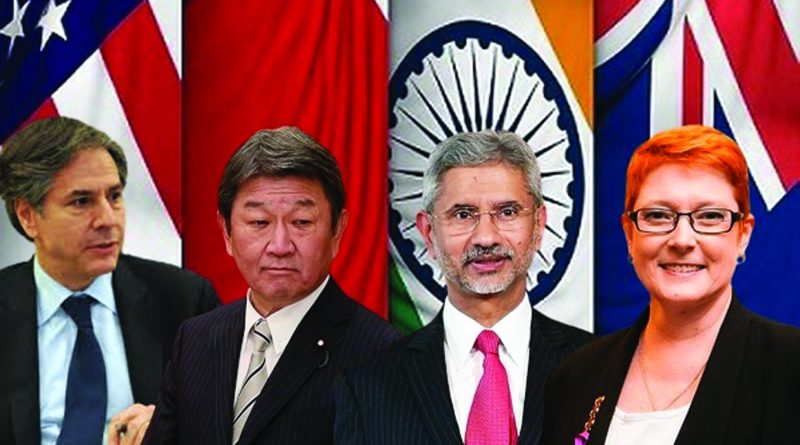 Asia’s regional order is clearly at a crossroads. The United States under the Biden administration has made clear its intentions to re-engage with its partners and allies in the region, and exert its influence once again as a Pacific power.

Yet even as the Biden White House has been quick to reverse many of the controversial policies introduced by the Trump administration, from abandoning the Paris climate agreement to leaving the World Health Organisation, wariness about US recommitment to the region persists. At the same time, there is growing concern that, even though India is the region’s biggest democracy with great potential to push back against mounting Chinese dominance, Delhi may be unwilling or unable to take on the role that others want it to take on. Nowhere are such hopes and fears for the emerging regional order reflected as well as they are in the Quadrilateral Security Dialogue, better known as the Quad.

The willingness of Japan, Australia, India and the United States to work together in order to address the ever-growing list of challenges in the Indo-Pacific is clear. Following the virtual meeting of foreign ministers on February 18, the US State Department reported that the four countries would continue to meet regularly to address common challenges in the Indo-Pacific, including dealing with the pandemic and addressing climate change. It also noted the importance of‘countering disinformation, counterterrorism, maritime security, the urgent need to restore the democratically elected government in Burma, and the priority of strengthening democratic resilience in the broader region’, in addition to strengthening cooperation in promoting an open Indo-Pacific region.

Yet most notable was what the State Department did not mention in the read-out after the foreign ministers’ meeting. It did not point out the obvious: that it is the threat of China that most unites the four like-minded countries. Another key issue that was swept aside was the challenge of economic growth in light of the uphill task of post-pandemic recovery worldwide. However, it should not be assumed that the Quad seeks to take a collective stance against Beijing, nor that they will find it easy to cooperate on economic recovery in light of their own domestic political realities.

In the case of economic growth, although two mega-regional trade deals have emerged from the Indo-Pacific over the past four years, neither the United States nor India is part of the high standard Comprehensive and Progressive Trans-Pacific Partnership agreement (CPTPP) or the ASEAN-led Regional Comprehensive Economic Partnership agreement (RCEP). In fact, both Washington and Delhi had the opportunity to be part of these trade deals, but chose to pull out at the eleventh hour due to domestic considerations. Given that China is already the single most important trading partner for almost all Asian nations, including Japan and Australia, the calculated retreat of the United States and India from multinational trade deals has proved to be a challenge for the region.

In India’s case, RCEP is keeping the door permanently open for Delhi so that it will be able to return to the deal at any time, unlike other potential member countries, which will have to wait a minimum of 18 months before they are able to join. Certainly, it will be more difficult to offset China’s dominance in the RCEP deal, as the single biggest economy by far, without India joining Japan, Australia, South Korea and Singapore in the deal. In addition to giving Delhi great flexibility about joining RCEP, Japan and Australia have also offered India another way to work together in hedging against Chinese economic domination, namely through the launch of a Trilateral Supply Chain Resilience Initiative late last year. Details of the deal are expected to be unveiled in the coming months, but the framework makes clear the three governments’ mutual interest in diversifying their supply chains away from China. Moreover, the plan is to keep the initiative open, encouraging Southeast Asian nations to join, which would certainly be a hedge against Chinese economic aggression as well.

Wariness about Beijing and the need to safeguard against over-dependence on China is without doubt the single biggest factor uniting the Quad. Yet there is also caution, in Tokyo in particular, about Delhi’s appetite to push back against the China threat and India’s broader foreign policy strategy. After all, India’s decision to pull out of RCEP came amidst domestic pressure to take action against the likely flood of Chinese imports into the subcontinent. That decision, however, may prove to be short-sighted, given that India will be outside of a trade framework that will facilitate inter-Asian trade and make the region even more attractive to foreign investments. In short, would India remain as attractive as a business destination when ASEAN, as well as Australia, New Zealand, Japan, South Korea and China, operate under a single low- or no-tariff zone?

Moreover, Tokyo will remain concerned about the willingness of Delhi to think beyond its immediate domestic needs and be able to share a longer-term vision for the regional order of the Indo-Pacific that decreases the hegemonic rule of Beijing. As one Japanese diplomat put it, India’s decision to pull out of RCEP has made India ‘more parochial, and could stop it from realising its full potential’.

If Tokyo’s strategic objective is to be able to rally a coalition of like-minded countries in the region to stand up against Beijing, then its confidence in Delhi has been rattled by the RCEP retreat. That in turn could also hamper Japan’s confidence in India to be a committed member of the Quad.