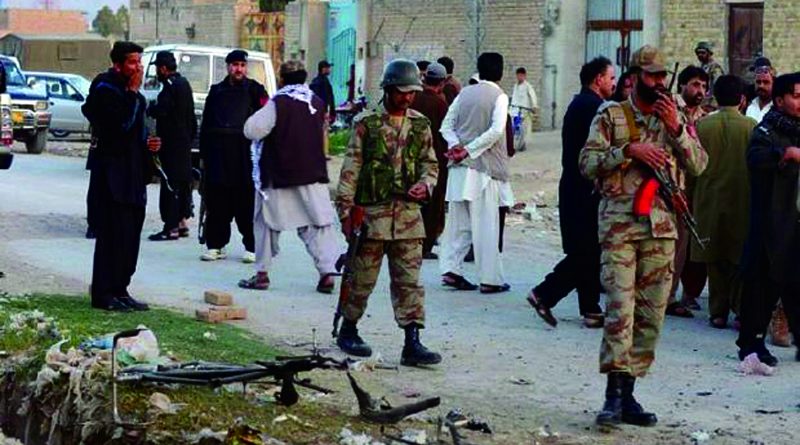 Brutality and exploitation by the Pakistan government are fuelling resentment amongst the Baloch. Richard Gregson  reports on the ongoing war between the people and the state

Violence begets more violence. This vicious cycle has been visible in Balochistan, a resource-rich yet poverty-stricken province comprising almost 44 per cent of Pakistan. While the fiercely nationalist Baloch never accepted Pakistani hegemony, Islamabad has in turn treated Balochistan as some sort of internal colony. With the Chinese entrenched there with their multi-billion dollar China-Pakistan Economic Corridor (CEPC), a Belt and Road Initiative (BRI) mega-project terminating at the Gwadar deep port on the Arabian Sea, the Baloch now face double colonisation. Important installations, including Gwadar port, and huge stretches of landshave liberally been leased out to the Chinese by the perennially debt-ridden Pakistan government.

Today Balochistan is a virtual war zone. Heavily armed militants attacked a security checkpoint, killing a soldier in Kech, Balochistan on February 14. As Pakistan observed Kashmir Day on February 5, at least two people were killed and four injured in an explosion near the DC office in Quetta, while earlier, another blast in Balochistan’s Sibi district injured 24 people. Two weeks before a landmine blast in the Sangaan area of Sibi had killed four soldiers of the Frontier Corps. The Balochistan Liberation Front claims to have carried out 130 attacks, killing more than 222 security personnel and injuring 200 in the last year.

The Pakistani army and the dreaded Inter-Services Intelligence (ISI) has, over the last coup of years, been on a shooting, bombing, abduction, torture and murder spree. Their kill-and-dump campaign has been intensified. Even helicopter gunships and F-16shave been used to drop napalm bombs, villagers allege. On December 20, a dozen helicopters bombed a religious place, killing several people in the Awaran district of Balochistan.

The situation is really grim. Data gleaned from official and other sources by Baloch nationalists show that, during 2020 alone,682 military operations were carried out, and 705 civilians were kidnapped or have gone missing. Two hundred dead bodies, including 122with bullet wounds, were recovered. While the cause of death of 60 persons could not be ascertained, eight bodies remain unidentified. Some 106 abductees were found detained in military torture cells.

In its zeal to provide ‘fool-proof’ security to Chinese personnel and installations, security forces have put up several new checkpoints. During raids conducted last year, hundreds of homes were looted, 1,100 set on fire. The uniformed marauders did not even spare cattle belonging to villagers, either shooting or taking them away. Three schools, suspected of being separatists’ hideouts, were burnt down in Buleda Tehsil of Kech district. Pursuing a scorched earth policy, forests in Buleda, Dast, Parom, Zamuran, Mand, Jhao Gichk, Mashkay and Bolan across Balochistan were set on fire. This could dangerously impact the province’s fragile ecosystem, already under stress due to frantic construction activities by the Chinese.

During 2020 alone, 682 military operations were carried out, and 705 civilians were kidnapped or have gone missing

Pakistan’s draconian practice of enforced disappearances has been the order of the day in Balochistan and other border areas. Those suspected of separatist allegiance are abducted by the security forces, detained illegally and torturedat military and paramilitary cantonments without trial for months or even years. Most victims simply disappear. Baloch activists, journalists, researchers, social workers and even women, children and students have been the targets of torture and torture-killing.

Nor are other Baloch spared, as there is widespread discontent against CPEC projects and the step-motherly treatment of Balochistan by the federal government. Army-sponsored fanatic Islamist organisations are allowed to operate with impunity in the region to terrorise the generally secular Baloch and to crush dissent. These include banned terror outfits like Lashkar-e-Jhangvi, Lashkar-e-Taiba and Quetta Shura of the Taliban.

Human rights organisations maintain more than 6,000 people who had disappeared over the last two decades in Balochistan are still missing. As many as 1,400 people have been found dead, their bodies riddled with bullets and drill holes, or with mutilations bearing signs of torture.

According to the UN Working Group on Enforced and Involuntary Disappearances (WGEID), 1,144 cases of allegations of enforced disappearances between 1980 and 2019, with 731 still missing, have been reported from Pakistan. The actual number, though, is much higher.

Pakistan’s Prime Minister Imran Khan has repeatedly claimed that his government is committed to ending the draconian practice, but the powerful army, a state within a state, is the one calling the shots. That Pakistan has not ratified the UN convention against enforced disappearances speaks of Khan’s duplicity. In June last year, the Balochistan National Party (BNP) quit the ruling alliance over the issue.

The UN WGEID has in its latest report observed that there is a ‘climate of impunity’ in Pakistan. The report said that it is impossible to bring violators of serious crimes and gross human rights violations to account, typically because in Pakistan there is an absence of proper investigation that would lead to the arrest, prosecution and sentencing of those responsible.

‘It results in concealing the truth; denying victims the right to effective remedy and reparation; and emboldening perpetrators of human rights violations. In Pakistan, impunity has also played a key role in the practice of enforced disappearances persisting, and also spreading – both in terms of geographical reach and also the categories of people being targeted,’ the report said.

It is alleged that prominent Baloch rights activists are even being targeted abroad. Sajid Hussain and Karima Baloch, both vocal critics of extrajudicial disappearances and human rights violations in Pakistan, died under identically similar suspicious circumstances. Falsely implicated in terrorism cases, they had fled Pakistan and were living abroad in self-imposed exile. Hussain, chief editor of the online news site, the Balochistan Times, had got asylum in Sweden, while Baloch was living in Canada. Their campaign exposing the Pakistani regime’s misdeeds had drawn a lot of media attention, and both were receiving anonymous death threats.

On March 2 last year, Hussain had gone to Uppsala near Stockholm to pick up keys for a new apartment. He went missing and his body was found more than a month later in the Fyris River. Police said it was a case of drowning.

Karima Baloch’s body was also found floating in Toronto’s Lake Ontario on December 21, again attributed to drowning by Toronto police. Paramilitary personnel seized her body when it was brought to Pakistan for burial. Curfew was imposed in around her village in Kech district, mobile services suspended and roads leading to the funeral site blocked. Only her close relatives and local villagers were allowed to attend her funeral.

Balochistan, a vast and sparsely populated area having a long coastline with the Arabian Sea, is rich in resources such as coal, natural gas, oil, copper, zinc, lead, etc. It is also of geostrategic importance, bordering Iran and Afghanistan, and China has invested heavily in the CPEC, grabbing long-term leases on the Gwadar seaport and vast swatches of land for industrial zones, plantation and farming.

In spite of the development mantra, Balochistan continues to be as neglected as ever. The locals see the exploitation of resources as a sort of internal colonialism. Nearly 95 per cent of the natural gas produced in Balochistan, for instance, is piped to the rest of Pakistan, while the local people suffer shortages. Of the Rs 23.8 billiongas and oil royalties earned by Pakistan from the year 2013-14 to 2017-18,the province received a measly Rs 0.09 billion. It is therefore not surprising that Balochistan is one of the most backward areas of the country.
CPEC projects aren’t providing employment and opportunities to Balochs. Most of the contracts are being executed directly by Chinese companies which give priority to Chinese technicians and workers. Other jobs have gone to Punjabis and those from different parts of Pakistan. Only 8 out of 330 CPEC projects have been allotted to Balochistan. Most of the important projects there are being directly implemented either by the Chinese or the federal government. Even otherwise, CPEC is under the overarching control of the CPEC Authority headed by a former general.

Local people who are left high and dry also sufferthe adverse impact of the environmental damage caused by Gwadar port and other construction activities. Fisherfolk complain about drastic reductions in fish due to year-round motorised fishing by Chinese trawlers. The Chinese don’t evendesist during the spawning season. Lands have forcibly been acquired for CPEC projects without compensating the mostly poor and marginal peasants – another sore point.

All this causes popular resentment against the government, besides giving rise to anti-Chinese sentiments and bolstering militancy. Baloch militants have in the past attacked a luxury hotel in Gwadar, the Chinese consulate at Karachi in 2018 and launched a suicide attack on the Pakistan Stock Exchange (PSX) last year in Karachi. Forty per cent shares of PSX are held by a Chinese consortium comprising three Chinese exchanges.

And with Pakistan’s security forces striking back and committing atrocities, the war between the people and the state goes on.