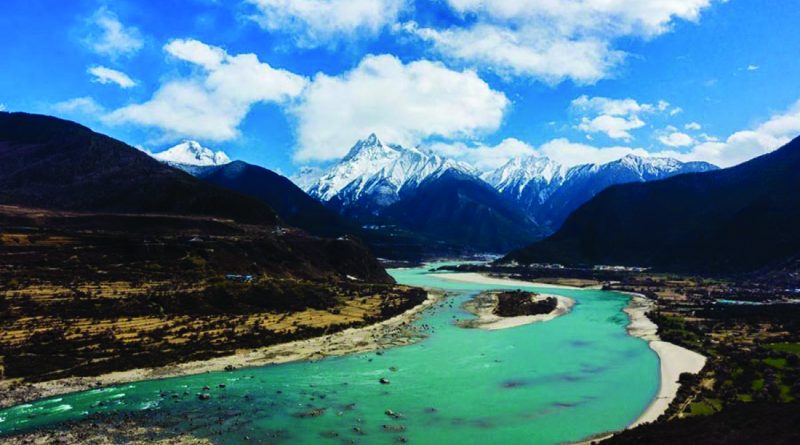 China’s mega-dam project on the Brahmaputra river promises strategic and other benefits for Beijing. But, asks Yvonne Gill, what of the human cost and ecological impact onthe region?

Chinese policy-makers always have two things uppermost in their minds: geopolitics and immediate economic gain. As long as a project reaps fast dividends and serves their military interests, long-term social, economic and ecological implications seem to be a secondary concern. The recent announcement that the world’s largest hydropower dam will be built on the Brahmaputra’s longest and main tributary in Tibet, Yarlung Tsangpo, clearly illustrates this Chinese mindset.

Over 23,000 large dams are operational in China, including mega dams. While a large dam is supposed to be over 15metres in height, a mega dam has a wall-height of 150metres. The Three Gorges Dam has a wall-height of 180metres, is over 2 km wide, and has a generating capacity of 22.5GW. The 600-km-long reservoir of the Three Gorges Dam submerged 13 cities, 140 towns and 1,350 villages and displaced up to two million people.

A ‘monster’ indeed, the Yarlung Tsangpo damaims to harness a stunning hydrological feature which perhaps has no parallel anywhere on Earth. From its source in the Angsi Glacierin western Tibet, the Yarlung Tsangpo flows 1,600 km, reaching heights of nearly 4,500 metres above sea level, making it the highest river in the world. The river plunges 2,700 metres at the Yarlung Tsangpo Grand Canyon(more than twice the depth of the Grand Canyon in the US),takes a ‘Great Bend’ tracing active geological fault lines, and enters Arunachal Pradesh, where it is known asthe Siang. This river is called Dihang in the plains. The 50-km section of the Great Bend, as the water gushes down some 2,700 metres, is where the monster hydropower project will come up, very near to the Indo-China border of Arunachal Pradesh.

The mighty river assumes the name Brahmaputra after another two tributaries, Lohit and Dibang, join it in Assam, in the course of its 91- km run in India. It is known as the Jamuna over its 337-km stretch in Bangladesh. At its confluence with the Ganges near Goalando, the river becomes Padma before it exits into the Bay of Bengal.

Chinese officials argue that the mammoth dam, like other much smaller dams on the same river, is a run-of-the-river project and will not hinder downstream flow. But damming a river cannot be done without constantly regulating and redirecting its flow. The Tsangpo monster dam will require a gargantuan system of tunnels, pipes, reservoirs and turbines to best exploit the gushing waters’vast potential.

Himanshu Thakkar, the coordinator of the South Asia Network on Dams, Rivers & People, describes it as the world’s ‘most challenging, costliest, and riskiest’ dam which could adversely impact the downstream in India and Bangladesh. During the monsoon, a sudden release of water can cause floods downstream, while lean seasons may see abnormally reduced flow. Water flow will have to be regulated all through the day to adjust to peak and off-peak demand for electricity, experts maintain, resulting in fluctuating downwards flow.

Moreover, the ‘Great Bend’ is a seismologic ally active zone witnessing recurrent earthquakes of varying magnitude. Avalanches and landslides are other hazards that dam construction activities will exacerbate. A worst-case scenario could be the monster dam or its reservoir bursting, leading to large-scale flash floods in India and Bangladesh.

A dam of such proportions has the potential to create environmental chaos by damaging the fragile glacier system and unique biodiversity, disrupting fish migration, and degrading water quality by withholding the river’s sediments from the fertile floodplains of Northeast India and Bangladesh. Lack of sediments in the Brahmaputra due to existing upstream dams in Tibet has resulted in dramatic increase in erosion in the lower riparian region.

The Indian government’s plan to build its own dam to mitigate the effect of China’s may create more problems, experts point out, and arobust joint monitoring mechanism with India and China as partners is a must. As of now, China needs to honestly share information related to the proposed project. This has not been the case in the past.

Although India and China have emergency response arrangements and data-sharing agreements related to landslide-induced damming and water flow, there have been instances when the Chinese with held hydrological data, endangering the lives of thousands living downstream.

In 2017, during the Doklam stand-off with India, China’s refusal to share water-level data led to the August flooding disaster in Northeastern India. More than 70 people died and 400,000 were forced to seek shelter in relief camps. Local officials said that rainfall was below expected levels and could not have led to the floods. The big surge in the flow undoubtedly came from Tibet.

It is feared, therefore, that these hydropower dams will give China a handy tool to manipulate the flow of the Brahmaputra and its tributaries, jeopardising the safety and water requirements of lower riparian Northeast India and Bangladesh, a rice-producing belt. An occurrence on March 1, 2012 is often cited by the local people of Pasighat, a town in Arunachal Pradesh, who, to their be wilderment, witnessed the Siang river drying up completely in the afternoon, then the river flow returning to normal soon after.No one has an explanation for this, though it is possible that the Chinese were having a test run. Now, with a monster power project near the Great Bend and huge volumes of water being stored away in gigantic reservoirs and tunnels, the danger is much more frightening.

The Tibetan plateau, the third largest reservoir of glaciers and permafrost after the North and South Poles, is the fountainhead of ten major Asian river systems, flowing across the world’s eleven most densely-populated nations: China, India, Vietnam, Cambodia, Laos, Thailand, Burma, Bangladesh, Nepal, Bhutan, and Pakistan.

The hugely fast-paced industrialisation of China over last few decades has increased demand for water, sending Beijing’s CCP bureaucracy on a massive water grab. The northern portion of China, where most of the industry and arable lands are located, has 44.3% per cent of the country’s population and 59.6% of arable lands, but just 4.5% of the water resources. Around 300 million Chinese have no access to clean drinking water, with some 400 of the 600 cities and towns facing water shortages. Most of China’s water resources are concentrated in the south, the Tibetan plateau: the mother source of major rivers of South and Southeast Asia.

So, with Tibet under their grip, China has built dams and canals to lift and transfer water from Tibet to the water-starved north and east. The eastern and central canals connect the upper and middle reaches of the Yangtze, Asia’s longest river, with Beijing and Tianjin. The proposed western canals will link the Yangtze and Yellow rivers to supply water to other parts of the country.

In order to feed the massive South-North diversion system, the Chinese have been frantically building dams and reservoirs on Yarlung Tsangpo, the Irrawaddy, Mekong and Indus in Tibet, to trap, lift and divert billions of cusecs of water to the country’s northern and eastern regions, for uses including electricity production. This international water theft deprives the lower countries of water that rightfully belongs to them, adversely affecting the rice-baskets of Asia. The Mekong, which flows through Laos, Burma, Thailand, Cambodia and Vietnam,is a lifeline for these Southeast Asian nations as it irrigates the rice fields and supplies fish. A string of mega-dams on the river has severely disrupted fish migration and hatching, while rice farms are being deprived of water for irrigation and alluvial sediments which increase the fertility of soil and help reduce erosion.

With an eye on the LAC (Line of Actual Control) with India, China is reported to have built a medium-size hydroelectric dam on the Indus in the Ngari Prefecture of Tibet. This dam is just 80 km from Demchok, a village in Ladakh on the Sino-Indian border. The Indus river originates in the Tibetan plateau in the vicinity of Lake Mansarovar. It flows through India’s Ladakh region towards Gilgit-Baltistan, then takes a southerly turn and runs the entire length of Pakistan before emptying into the Arabian Sea. Its eastern tributaries – Chenab, Jhelum, Ravi, Beas and Sutlej– are the lifeline of the Indian Punjab plains.

Another water diversion project envisages laying canals from the Indus and Sutlej Rivers in far-west Tibet to Xinjiang in the west of China, where significant deposits of shalegas and oilsands have been found. Fracking for shalegas and the extraction of oil from oilsands require huge quantities of water. Other water-guzzlers are the new coking mega-plants being constructed in Xinjiang to turn coal into gas and pipe it back to the east coast industrial zones.

These mammoth dam projects might satiate China’s growing demands for a few decades, but they will accelerate the process of devastation of the fragile high-altitude environs. As glaciers and snowlines of the Himalayas retreat and the ancient permafrost melts away to release the now frozen carbon dioxide and methane, kicking up the temperature, the waterways of the Tibetan Plateau will initially cause unprecedented floods downstream and then dry up gradually, turning the vast plateau into a biting-cold desert. A parched, water-starved South and Southeast Asia and mainland China will become part of a dreadful cartographic record.

Let us hope sanity prevails and this does not happen.