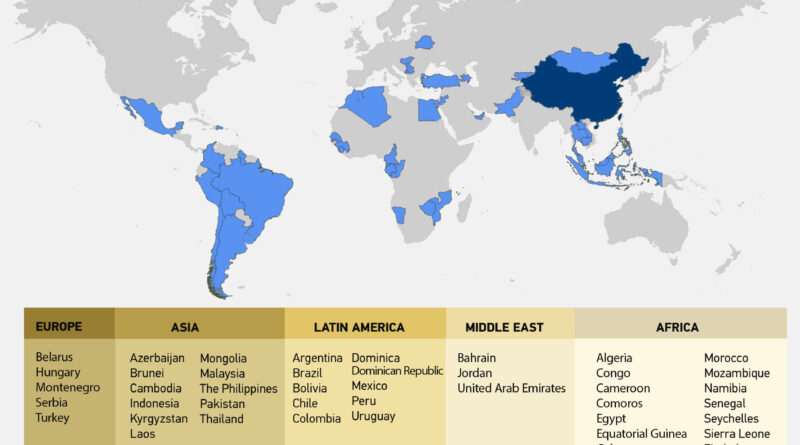 While European nations engage in what has been termed ‘vaccine wars’ to gain supplies to vaccinate their citizens, China is leading the world in ‘vaccine diplomacy’, helping many countries without their own production facilities fight the pandemic, as  Nicholas Nugent reports.

It is easy to see the fight to control the spread of COVID-19 as one between rich countries and poor. For many months, the richer countries were winning in vaccine production. Now the tables have turned and the poor countries are gaining ground.

As Europeans bicker over supply contracts, two Asian nations, India and China, have swiftly become the world’s major vaccine producers, each announcing production targets of at least 1.5 billion vials this year – enough to give a single dose to more than a third of the world’s population.

China has at least four indigenous vaccines in production by its Sinovac and Sinopharm companies and the Chinese Academy of Sciences. India has two, while the Serum Institute of India (SSI), the world’s largest vaccine manufacturer, also produces under licence the popular AstraZeneca vaccine developed in Oxford, and plans to manufacture three other vaccines from the US and UK.

Both countries are distributing vaccines overseas alongside intensive vaccination programmes at home. India has already sent supplies to six neighbouring countries, as well as to Africa and Europe and contributed generously to the UN-backed Covax programme supporting poorer countries before the government banned further vaccine exports following an upsurge in cases at home. By late March China’s largesse had benefited 45 countries (see chart), with plans to double that number.

Success in bringing the pandemic under control at home has made possible China’s global distribution. Belt and Road Initiative partners are receiving Chinese vaccines, as are member states of the European Union, where the vaccination programme has been running slowly because of supply hitches. Europe’s medicine regulator has not so far approved any Chinese vaccines but that has not prevented Hungary, Poland and the Czech Republic from buying vaccines from China or announcing intentions to do so. Chinese vaccines have enabled Serbia and Hungry to vaccinate a higher proportion of their citizens than other countries of mainland Europe by a wide margin.

Among those receiving Chinese vaccines outside Europe are several Muslim countries that pointedly have not criticised China for its alleged persecution of Uighurs and other Muslim peoples: Turkey, the United Arab Emirates, Pakistan and Indonesia. This has led some to charge that friendship with and support by China are worth more than Islamic solidarity.

Last year China was criticised for ‘wolf warrior’ diplomacy when it instructed diplomats abroad to counter the notion that COVID-19 was a ‘Chinese virus’ – a view articulated by, among others, former US president Donald Trump. Now China is being praised for its efforts to distribute vaccines around the world, including to poorer countries, as it did previously with personal protective equipment (PPE), in the production of which it is the world leader.

China has good reason to work hard to win friends and influence nations. Apart from being blamed for ‘starting’ the virus, it has come under much international criticism for its tightening of security laws in Hong Kong and its treatment of the Muslim Uighur people of Xinjiang.

A US-based think tank recently categorised China’s treatment of Uighurs – including enforced re-education of at least a million individuals and measures to prevent women giving birth – as ‘genocide’. A report by the Newlines Institute for Strategy and Policy said its policies in Xinjiang met all five provisions of the UN-backed Genocide Convention, to which China is a signatory. The report concluded: ‘The intent to destroy the Uighurs as a group is derived from objective proof, consisting of comprehensive state policy, which Xi Jinping, the highest authority in China, set in motion.’

National governments have so far held back from accusing China of genocide, despite criticising its actions in Xinjiang – the US, Canada, Britain and EU member states have imposed sanctions on Xinjiang officials. However, parliamentarians in the Netherlands, Britain, Canada and the United States have cited genocide in Xinjiang in calling for the venue of the Winter Olympics, due to take place in Beijing next February, to be changed. National Olympic committees have not so far backed the call.

Any hope that the trade-focused difficulties between China and the United States might improve under President Biden was punctured when US Secretary of State Antony Blinken met China’s Foreign Minister Wang Yi in Alaska in mid-March for what turned out to be a bad-tempered exchange. China countered Uighur genocide claims by comparing America’s treatment of its own black minority.

Evident from the meeting is that President Biden’s administration is not about to ‘go soft’ on China. With the US also leading the challenge to China’s claim over the South China Sea, it is hard to see this as anything other than a ‘cold war’ between the world’s two largest economic powers.

There are particular difficulties between China and the United States over the latter’s banning of Chinese mobile telephone entrepreneur Huawei. These impact Canada too, following its arrest and detention for more than two years of a senior Huawei executive, at the instigation of the US, for her alleged breach of sanctions against Iran. Following the arrest of Ms Meng Wanghou, whose father founded Huawei, China detained two Canadian citizens, apparently as a reprisal.

Tit-for-tat measures characterise China’s foreign policy and not just with the US and Canada. It used to be the case that the main ways for nations to upset China were to send a senior envoy to Taiwan or to receive the exiled Dalai Lama of Tibet, thus in China’s eyes recognising the independence of those territories. Now additional causes of offence include criticism of China’s action in two other territories, Hong Kong and Xinjiang.

Also, blaming China for the outbreak of COVID-19 – notwithstanding China’s reasonable claim that it has led the battle to bring the virus under control – and calling for an enquiry into the pandemic’s origins is another sure way to offend China, as Australia – who followed the US lead in banning Huawei products from its indigenous mobile network – found out to its detriment, when China reduced imports of Australian agricultural and mineral products.

Where this international battle for influence will lead is difficult to predict. If there is a crumb of comfort from the Alaska meeting it is that the US and China are still cooperating on other Asian issues, such as Iran, North Korea and Afghanistan, as well as on climate change, where Western nations’ position is that cooperation with China, a major carbon emitter, is essential.

In the immediate future China will be watching – probably with some concern – international criticism over the Uighurs, though it is expected to ride out smoothly calls for the Winter Olympics to be taken away from Beijing.

Meanwhile, its dominance of both vaccine production and distribution – as well as that of India – will only assist what President Xi Jinping calls ‘global public good’, benefiting citizens of both rich and poor countries and almost certainly contributing to the ultimate defeat of the pandemic.