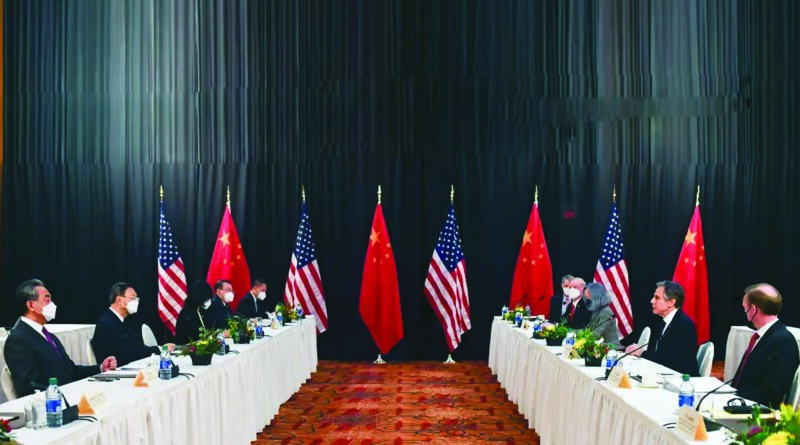 Despite a chilly start, high-level talks between the US and China yielded some positives – though both sides will have to tread carefully going forward. Humphrey Hawksley reports from Washington DC

As dust settled from last month’s discordant US-China summit in Alaska, the People’s Daily published two photographs side by side. One showed the 1901 Boxer Protocol meeting in which Western powers forced their way onto Chinese soil after quelling an anti-foreign uprising.

China regards those sanctions imposed on the corrupt Qing dynasty as the beginning of its national humiliation, which saw swathes of sovereign territory fall under the control of America, Britain, Germany, France and Japan. It only ended in 1949 when the Chinese Communist Party came to power.

Apart from the older picture being monochrome, with participants crowded around a table, and the more recent being in colour with social distancing, the mood and atmosphere of big power debate appear remarkably similar. The image went viral on China’s Weibo social media platform and encapsulates Beijing’s new mood of confidence, strength and uncharacteristic straight-talking.

In short, China went to Alaska to tell the world it was time for payback and global readjustment.

The summit began with a very public and hostile exchange between the American and Chinese delegations, with each side using the media for their domestic audiences, which are demanding tough national positions. Part off-the-cuff and part choreographed, the exchange cemented the haphazard and chaotic policies of the Trump administration into clear positions of strategic balance and opposing values.

For China, this was the beginning of a process to re-write the world order.

‘I don’t think the overwhelming majority of countries in the world would recognise that the universal values advocated by the United States or that the opinion of the United States could represent international public opinion,’ top diplomat and Politburo member Yang Jiechi told his American counterparts. ‘Those countries would not recognise that the rules made by a small number of people would serve as the basis for the international order.’

The US Secretary of State Antony Blinken, flying infrom meetings with allies in Tokyo and Seoul, was equally blunt about China’s actions over Xinjiang, Hong Kong and Taiwan, together with ‘cyber attacks on the United States and economic coercion toward our allies’.

‘Each of these actions threaten the rules-based order that maintains global stability,’ Blinken argued, laying out three parameters of the Sino-US relationship – ‘competitive where it should be, collaborative where it can be, adversarial where it must be’.

Such clarity, albeit polarised, is welcome in Washington, where for more than a decade there has been dithering on how to handle China’s rise, much of it among the now ruling Democratic Party.

During the Obama administration, views were split between two groups. There were those advocating that the US and China should forge a collegiate relationship as the two leading global powers, coining the term ‘G2’. These officials argued, for example, that working together on climate change superseded the need to stop the illegal building of military bases in the South China Sea.

Gone, now, is the anti-China rhetoric of the Trump administration with its Cold War scenarios portraying the government as a Marxist-Leninist regime out of step with its own citizens.

One pragmatic flaw of that strategy was the position of Japan, America’s most important Indo-Pacific ally but a nation that also has a deeply entwined economic relationship with China, which it has to retain.

The highly divisive Trump policies did not allow for such nuance. His foreign policy teams came mostly from military backgrounds and lacked expertise in international commerce and diplomacy.

‘You can’t unilaterally cause the collapse of the Chinese Communist Party,’ Dr Michael Green of the Center for Strategic and International Studies told Asian Affairs. ‘You can’t compete without allies and partners, and the allies and partners are not going to sign on for regime change.’

The South China Sea has become a theatre in which the militaries of both sides can challenge each other, and China can continue to test the resolve of its Southeast Asian neighbours.

The Permanent Court of Arbitration in the Hague has ruled Beijing’s building of bases there to be a violation of international law. Its ability to control the sea lanes, by military force if it sees fit, has become a threat to global trade.

Following its acrimonious start, the Alaska summit ended on a cautionary, upbeat note. According to the Xinhua news agency, both governments would ‘maintain dialogue and communication, conduct mutually beneficial cooperation, avoid misunderstanding and misjudgment, as well as conflict and confrontation.’ The aim, it said, was to ‘promote sound and steady development of China-US relations’.

The sharp and direct language at the start marks a new-style of negotiation in which Beijing feels assured enough to challenge the US to an open, American-style gloves-off debate on America’s own territory.

After such a public airing in Alaska, the Sino-US relationship may well have become much healthier. At least each side knows exactly where the other stands.

The same foreign powers that humiliated China with the 1901 Boxer Protocol are forging alliances to restrict it again, particularly with a British aircraft carrier leading a multilateral European force to the South China Sea later this year.

Both China and the US will need to walk a tightrope to keep misunderstandings and misjudgments in check.

Humphrey Hawksley is a former BBC Asia Correspondent. His latest book is Asian Waters: The Struggle over the Indo-Pacific and the Challenge to American Power