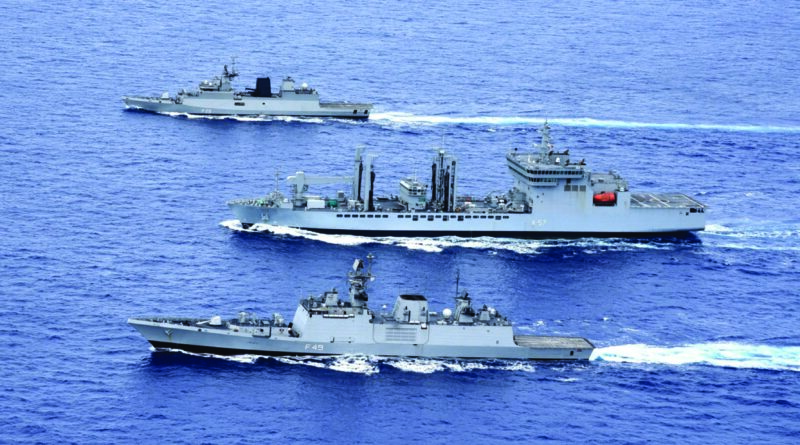 Amid mounting tensions with China,  G. Parthasarathy assesses the maritime rivalries, and growing cooperation, emerging in the Indo-Pacific region

People in India have remained intensely focused on the coronavirus pandemic during the past year. Despite the emergence of new strains of the virus, there were indications that the pandemic was being brought under control a few months ago.  However, as in Europe, people in India have become apprehensive after the disease showed signs of revival, particularly in some of the country’s southern states. Prime Minister Narendra Modi and State Chief Ministers have met and remained in close touch, to jointly take steps to limit and prevent the spread of the virus. While Covid-19 is naturally the primary focus of global attention, the Prime Ministers of Australia, India and Japan, along with President Biden of the United States (four nations labelled as the ‘Quad’), met on March 12 to discuss major issues of contemporary interest. The four leaders discussed measures to deal with the challenges posed by a rising and increasingly assertive China. Beijing has appeared ever more determined to assert its territorial claims across its land and maritime boundaries with virtually all its neighbours. Its actions have showed scant respect for the provisions of International Law.

What emerged from the meeting of the Quad leaders surprised the world. It was an announcement that the four countries would cooperate in an effort to enable India to produce an additional two billion vaccines by the end of 2022, to combat the coronavirus challenge across the Indo-Pacific Region. The US Company Johnson and Johnson will collaborate with its Indian counterparts on this project. Funding and logistical cooperation will be provided, principally by Japan, along with other members of the Quad.  The leaders of the Quad asserted: ‘Together, we pledge to expand and accelerate production in India of safe, accessible and effective vaccines. The US, Australia, Japan and India had already undertaken such cooperation in the Asia-Pacific in 2004, when the Indian Ocean was hit by a tsunami.

The Quad will work closely on a wide range of issues. Japan and India have already collaborated extensively in development projects in Indian Ocean islands such as Sri Lanka and the Maldives. There is also interest in working together with countries like Indonesia, Vietnam and Myanmar, in asimilarvein as the Quad. Such cooperation is set to expand. Richard Hass, the highly regarded President of the US Council on Foreign Relations, recently noted: ‘China is bordered by 14 countries, four of which are nuclear armed and five of which harbour unresolved territorial disputes with Beijing. These include an ageing but wealthy Japan, a rising and nationalistic India, a revanchist Russia, a technologically powerful South Korea, and a dynamic and determined Vietnam. All these countries have national identities that resist subordination to China, or its interests. And the United States maintains a constant, forward-deployed military presence in the region.’ An assertive, territorially ambitious and territorially aggressive China looms large in the strategic thinking of members of the Quad, and in the concerns of the countries of East and Southeast Asia.

New Delhi is keeping a close watch on the emerging situation across the Indo-Pacific region. The main regional grouping in the region is ASEAN, which extends from Myanmar, Thailand, Indonesia, Singapore, Brunei and Malaysia, across the shores of the Arabian Sea in the Indian Ocean to Vietnam, and to the Philippines in the Pacific. The Quad has sought to be neutral on internal rivalries and differences between individual members of ASEAN, while cooperating with them in dealing with China’s propensity for territorial expansion.  While this may not directly concern countries which have no territorial problems with China, it does address the concerns of countries like Vietnam, the Philippines, Malaysia, Brunei and Indonesia on their maritime frontiers, which are facing direct threats from China’s territorial claims. India’s Eastern Fleet, operating across the Bay of Bengal, has close ties with the US Pacific Fleet, and India’s Western Fleet, operating in the Arabian Sea, has similar contacts with the US Fifth Fleet in Bahrain. There have been recent exercises by the navies of the Quad in the Arabian Sea and the Pacific Ocean. More importantly, the US and Indian navies have established institutional arrangements for cooperation in Bahrain, which houses the US Fifth Fleet. China, in turn, has access and naval base facilities in Djibouti and the Gwadar port in Pakistan. Two more ports are planned in Pakistan’s Sindh Province, evidently to base Chinese warships.

India has concluded agreements on demarcating its maritime boundaries with virtually all its neighbours, ranging from Sri Lanka and the Maldives to Bangladesh, Myanmar, Thailand, Indonesia and Malaysia. There is also a broad agreement on India’s maritime frontiers with Pakistan, although some small differences need to be sorted out before a formal agreement can be signed. China has embarked on moves to contain Indian maritime influence by strengthening Pakistan’s navy, and is set to provide Pakistan with eight submarines and four frigates in the near future. Beijing’s policies across the Indian Ocean are quite evidently directed at the strategic containment of India. China is, however, beset by problems arising from its claims on its maritime frontiers with virtually all its neighbours, including Japan, Taiwan, the Philippines, Vietnam, Malaysia, Brunei and Indonesia. These differences will remain causes of maritime tensions in the Indo-Pacific region.

The Quad will now seek to forge a greater measure of cooperation and unity with and within ASEAN, to address such crucial issues together. Interestingly, two major European powers – France and the UK – are now planning to establish a continuing maritime presence in the Indo-Pacific, with Britain planning to deploy an aircraft carrier strike group in the region later this year.  The Russians, likewise, have a continuing interest in maritime cooperation with Iran and the Arab Gulf States. The Indo-Pacific region is thus set to witness growing external maritime presences in coming years, even as China moves to establish its regional hegemony, disregarding the provisions of International Covenants on the Law of the Seas. The maritime tensions in the region can only be addressed if the countries of the region respect the provisions of International Law – provisions which China presently refuses to accept, or respect.

Parthasarathy, a career Foreign Service Officer, is currently Chancellor of the Central University of Jammu and President of the Indian Habitat Centre in New Delhi. He previously served as Ambassador of India to Myanmar, High Commissioner of India to Australia, Pakistan and Cyprus, and Spokesman of the Prime Minister’s Office