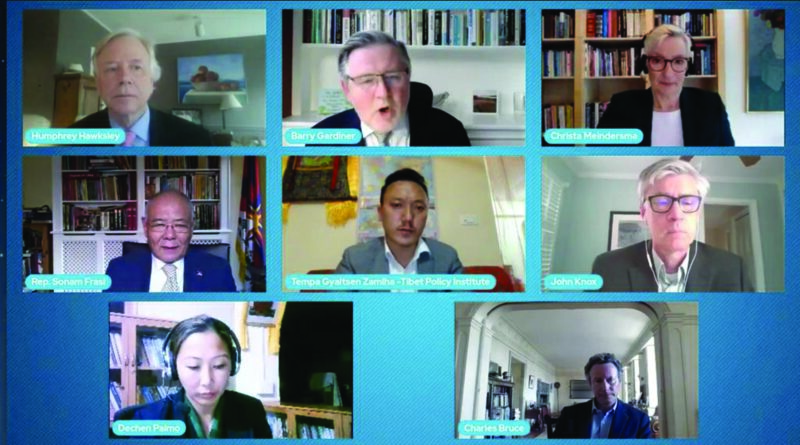 Fixing the Roof of the World

In its most recent virtual seminar, the Democracy Forum gathered a panel of experts to discuss growing threats to Tibet’s vital ecosystem, their far-reaching impact and theurgent need for a global response

Too often, in climate and environmental debates, the Tibetan Plateau is ignored. Yet this area of 2.5 million square kilometres, sitting more than 4,000 metres above sea level, has the largest concentration of ice outside the North and South Poles and a plethora of rivers supplying water to 40 per cent of the world’s population.

‘Tibet: an environmental crisis in waiting’was the title of a March 16 Democracy Forum seminar opened by TDF president Lord Charles Bruce with a warning of the ‘dire consequences for the ecology of Asia and its people’, should neglect and damage to the environment there be allowed to continue.

‘The source of Asia’s most important rivers – the Yangtze River, the Yellow River, the Indus, the Mekong, the Brahmaputra, and the Salween – lies here,’ he said, laying out a worst-case scenario of a parched and water-starved South and Southeast Asia, due to China’s mishandling of the environment.

Sonam Tsering Frasi, Representative for the Office of Tibet in London, corroborated Lord Bruce’s argument. Based on current projections, there could be the outright collapse of Tibet’s river system, harming agricultural industries across Asia. This truth superseded issues about politics, inequality and culture. Among the ‘enormous consequences’, Frasi warned, would be the mass migration of millions looking for sustainable places to live.

Dechen Palmo, an environment researcher at the Tibet Policy Institute, presented detail of China’s use of hydropower. China had more than 28,000 dams with hydropower, providing 18 per cent of the country’s electricity. That figure will rise, and more dams are slated for the Tibetan region.

Palmo gave the example of the 990-megawatt Wunonglong Dam, one of eleven in Chinese-controlled territory of the upper Mekong River. Land compensation had become an acrimonious issue while China was holding back large amounts of river water, causing shortages downstream.

Accusing China of creating political leverage in its control of the rivers, Palmo cited a 2020 report by the organisation Eyes on the Earth, which charged Beijing with decreasing the flow from the Mekong River, thus contributing to drought in countries downstream.

‘The satellite doesn’t lie,’ said the report. ‘There was plenty of water in the Tibetan Plateau, even as countries like Cambodia and Thailand were under extreme duress.’

Palmo explained how Beijing used water supply to force gratitude from its neighbours by increasing water flow. ‘Since China began damning the Mekong, droughts have become more frequent and intense,’ she said.

Tempa Gyaltsen Zamlha who heads the Environment Desk of the Tibet Policy Institute, spoke about a ‘new climactic reality’ in Tibet, listing an unprecedented number of natural disasters occurring since 2015.

They included 2016 mud and landslides in Amdo in the north-east, a 2017 mountain collapse in Golok in the south-east, and 2018 floods in Ngawa in the north. Contributing causes were infrastructure building, climate change and the mining of raw materials such as lithium and copper – mainly carried out by Chinese companies without external oversight.

Zamlha argued for international pressure on China for greater transparency, coupled with a full scientific investigation as to the causes of these disasters, arguing that ‘the increasing cases of natural disasters poses serious threat to people in Tibet as well as people across Asia’.

Former United Nations special rapporteur on human rights and the environment, John H Knox, added perspective by mapping out how human rights and environmental protection were dealt with under international law and how both were dependent on each other.

‘We can only enjoy human rights, including our rights to life and health, if we have a safe, clean, healthy and sustainable environment,’ he explained.

Different societies would reach different conclusions on how to strike the balance between economic development and environmental protection, but such a balance could not be struck without respecting human rights and getting input from those directly affected

The Tibetan people had a right to be informed and have access to remedies, and the Chinese government had an obligation to help them. However, Knox added, enforcing international law, or even achieving a ruling, was a different matter.

Christa Meindersma of the International Campaign for Tibet shone a spotlight on the UN’s Biodiversity Conference due to be held this October in Kunming, the Chinese capital of Yunnan at the foot of the Tibetan Plateau. This, she said, would create opportunities for international advocacy, even though Beijing may try to restrict discussion.

‘The aim is to agree on the global biodiversity framework that will set worldwide standards for preserving biodiversity in the years to come,’ she said. ‘The downside is, the conference takes place in China, where any open and critical debate is stifled, or at best tightly controlled.’

On a positive note, Meindersma pointed out that in 2019 the US Congress passed the Tibetan Policy and Support Act which required the monitoring of glacial retreat, temperature rise and carbon levels in order to get better understanding of permafrost, river flows, grassland and desertification. The law also called for the involvement of the Tibetan people and non-governmental organisations and encouraged the creation of a regional framework on water security.

However, on a more downbeat note, she raised the issue of environmental activists languishing in Chinese prisons.  Governments attending the biodiversity conference should call for their release before sending delegations to Kunming.

In summing up, The Democracy Forum chair, Barry Gardiner, MP, agreed with Meindersma’s focus on the Kunming conference, but disagreed with setting pre-conditions such as the release of activists or sanctions on international supply chains using raw material from mining.

‘Imposing conditions is not a constructive way to bring people in to engage in the international arena,’ he argued. ‘China really wants Kunming to be a success. It should not be about shouting, but about genuine engagement, highlighting different elements, as we’ve done today, so we get clear perspective. It’s about clarity and transparency.  We are trying to achieve a resolution and to establish and enlarge common ground.’