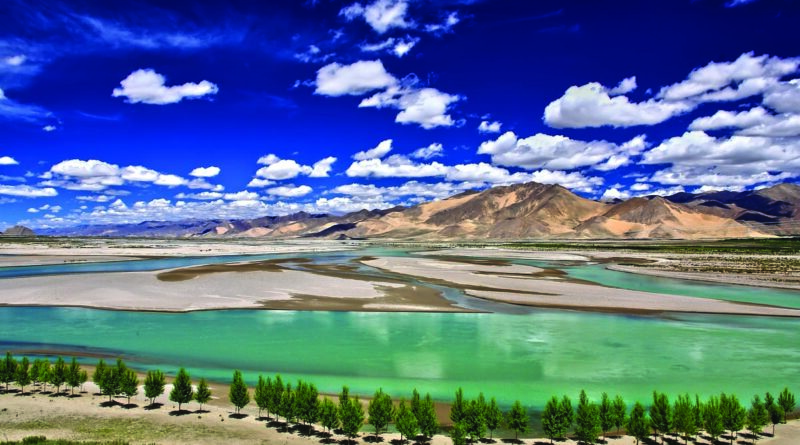 From genocide to ecocide

Endowed with the five bounties of Nature – thousands of glaciers, perennial rivers and lakes, virgin forests and grasslands, rare flora and fauna, and mineral resources –Tibet, the world’s largest and highest plateau,is a heaven on Earth. And quite appropriately, the Chinese name for Tibet is Xizang –Xi for ‘west’ or ‘western’, and Zang meaning ‘treasure trove’.

But the growth-obsessed Chinese Communist Party (CCP) mandarins sitting in Beijing seem to have declared anecological war on Mother Nature in Tibet. The treasure trove is being plundered to feed the input-hungry ‘factoryofthe world’ that China is known as today, and an environmental crisis of global ramifications is in the making.

Ever since the Chinese occupied Tibet, a peaceful Buddhist theocracy, in 1949/50, Tibetans have suffered waves of genocide. Their culture and beliefs have faced efforts to exterminate them; human rights and individual liberties have been trampled underfoot. Beijing has made systematic attempts to alter the demographic composition of the region by settling Han Chinese from the mainland and forcing Tibetans to work in distant cities and towns after uprooting them from their villages or nomadic way of life.

This ruthless subjugation campaign has continued for the past 70 years, although the culturally conscious and religiouslydevout Tibetans have refused to give up and continue to resist the communist dictatorship.

Alongside repression of the people, the government has been executing a host of projects ranging from mining, hydro-electricity generation and diversion of rivers towards the mainland, to laying roads and railway lines and setting up factories across the Tibetan Plateau,one of the most ecologically fragile regions of the world. Tibet’s 46,000 glaciers give birth to the continent’s major river systems – the Indus, Sutlej, Brahmaputra, Irrawaddy, Salween, Mekong, Yangtze, and Yellow Rivers –lifelines thatprovide water, food and livelihoods to some two billion people.

Early explorers described Tibet as a great zoological garden spread over 2.5 million square kilometres, with a unique biodiversity comparable to the Amazon rainforest. The Plateau is home to 81 endangered species, including 39 mammals, 37 birds, 4 amphibians and one reptile. Buddhist canons prohibited the hunting of wildlife, but this balance between man and nature was abruptly disrupted soon after the Chinese occupation.

The People’s Liberation Army (PLA) went aboutgleefully slaughtering herds of wild yak, sheep and deer, sometimes with automatic weapons.Chinese authorities even encouraged trophy-hunting of rare animalssuch as the snow leopard, Tibetan antelope (chiru), and argali sheep. During the 1980s and 1990s, poachers killed deer for antlers, musk, bones and other parts used in Chinese medicine,and they also slaughtered antelope, gazelle, blue sheep and wild yak, as their exotic meat fetched high prices in Hong Kong and European markets.The highly endangered chiru are hunted even today and their fur smuggled to India and other countries, where it is hand-woven into shahtoosh to make the world’s most expensive shawls.

Tibet’s forests – some of the oldest in Asia with an average tree height of 90 feet and girth of 5 feet –have been a prime target of state-owned logging companies. China is one of the world’s largest consumers of wood. Reckless logging has destroyed more than 50 percent of these centuries-old forests, resulting in erosion, flooding and a rise in the mean temperature.

The most lucrativeand profitable area that both Chinese and foreign companies have been involved in is mining. The near lack of regulations and environmental concerns makes it easier for mining conglomerates to operate with impunity in the Plateau. Tibet has large copper deposits, along with gold and silver, and other minerals such as molybdenum, lead, zinc and lithium. While electric cars and mobile phones have been driving up demand for lithium for batteries, the growth of renewable energy sectors, including wind and solar energy farms, has led to a huge surge in the demand for copper needed for efficient electrical transmission.

Most copper deposits in Tibet are close to the Yarlung Tsangpo River, upper stream of the Brahmaputra, where the Indian land mass collided with the Eurasian continent 80 million years ago to create the magnificent Himalayas. The collision generated intense pressure and heat, pushing up heavy metals that are now available as ore deposits. The copper and other minerals are extracted from these mines by blowing up, digging out, crushing and concentrating an estimated 30 million tons of rock a year. Each ton of this crushed rock yields less than one per cent of copper, much less molybdenum, and minuscule quantities of silver and gold.

The powered mountain of toxic waste, or tailings, is piled up on mountain ridges and riverbanks, and will remain there forever even after the ore deposits are exhausted. The powdered rock continuously seeps into the adjoining river and its tributaries, polluting and chocking the flow of water.

There has been an international hue and cry over the disastrous aftermath of copper mining, which led to standards on tailings management being drafted by the International Council on Mining and Metals (ICMM), and the UN Environment Programme. But none of the Chinese companies is a member of the ICMM, while the CCP government simply looks the other way because big money is at stake.

Geologists have mapped deposits of 126 minerals in Tibet, including strategic minerals such as lithium, borax, and even superior iron. The Plateau sit on 40 million tons of copper, another 40 million tons of lead and zinc, and more than a billion tons of high-grade iron. Tibet also has the world’s biggest uranium reserves. Uranium mining and processing is carried out in a secretive manner without adequate precautions, reports from Tibet maintain.

In addition, there have been international concerns about the disposal of nuclear waste in the Plateau too, and local communities have been protesting and petitioning against the callous approach of mining companies. Much in the Communist Party style, however, popular opposition is either ignored or put down with a heavy hand.

Recently, the government notified 68 new regulations that describe preserving nature as ‘a heroic human struggle’ and that there was a need for ‘construction[sic] of ecological civilisation’. These regulations will come into force from 1 May this year. Brave words, it may seem, but when you read the fine print, its Article 9 exempts all existing industries, extractions, enclaves and corridors from the new regulations. Likewise exempted is the Chinese army and all its infrastructure, which almost dot the region.

On the receiving end of the new regulations are Tibetans who have been following a traditional nomadic lifestyle for centuries. Article 14 says the Tibet Autonomous Region (TAR) government shall ‘implement the grazing prohibition and resting of grazing, and the balance of grass and livestock, and establish an ecological restoration mechanism for degraded grasslands’. In other words, the nomadic pastoralists are blamed for over-grazing and not letting grass grow. Article 20 adds that TAR will pursueits‘ high-altitude and ecological relocation projects in nature reserves, building model sites for nature protection’. And Article 38 wields the stick: ‘Religious and folklore activities should conform to the concept of green ecology. [Officials should] guide the greening of religious activities and consumption methods.’

The sad part of the CCP diktat is that it is singling out the very people who have lived a tough and disciplined life in harmony with nature for thousands of years, and blaming them for destroying their own habitat. Thus the CCP pretends to be some sort of god-sent saviour, without even acknowledging its own role in wreaking havoc on a pristine land China invaded 70 years ago.