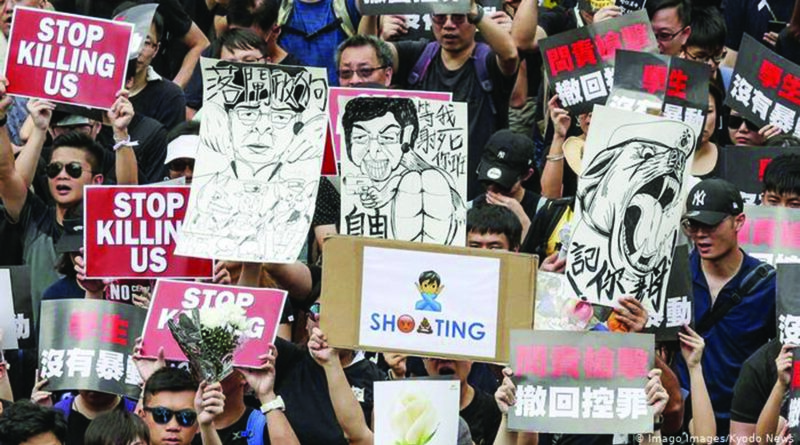 Following China’s move to tighten its political control over Hong Kong, the US and its allies have responded with sanctions against leading Communist Party figures. Duncan Bartlett considers whether Beijing will retaliate against its international critics

The Chinese Communist Party did not expect the issue of Hong Kong to take up much time during the meeting of the National People’s Congress (NPC), which took place in Beijing during early March.

Most of the 3,000 or so delegates gathered in the Great Hall of the People had travelled from other provinces in the People’s Republic, some of them thousands of miles from the capital. Few were particularly interested in the unusual politics and history of a port in the deep, distant south. They were more concerned about the development of their own regions.

Aproposed law urging patriotism and loyalty in Hong Kong was in keeping with China’s values, the NPC members were informed. It seemed relatively uncontroversial. The legislation was passed by a margin of 2,895 votes. There was one abstention.

But while the NPC reaction was as anticipated, the international response was swift and angry.

Even as the NPC continued its meeting in Beijing, the United States sanctioned 24 Chinese officials, including a Politburo member, Wang Chen. The sanctions aim to sever ties between the listed individuals and US financial institutions, as well as preventing them from using banks and companies which trade with America. Hong Kong’s leader Carrie Lam, who was previously sanctioned by the US, claims that she has been cut off from the international banking system, forcing her to stockpile cash in her office.

US Secretary of State Antony Blinken said the sanctions on China are in response to ‘deep concern with the decision by the National People’s Congress to unilaterally undermine Hong Kong’s electoral system’.

He added: ‘A stable, prosperous Hong Kong that respects human rights, freedoms, and political pluralism serves the interests of Hong Kong, mainland China, and the broader international community. The United States stands united with our allies and partners in speaking out for the rights and freedoms of people in Hong Kong, and we will respond when the PRC fails to meet its obligations.’

Further trouble for China was brewing. Less than a fortnight after the conclusion of the NPC meeting, the European Union moved to freeze the assets of more senior Chinese officials and politicians. This time the trigger was not Hong Kong, but China’s treatment of its Uighur Muslim minority in Xinjiang.

The US, the UK and Canada joined the EU in a united response. In a joint statement, their foreign ministers said they ‘are united in deep and ongoing concern regarding China’s human rights violations and abuses in Xinjiang’.

Europe’s Inter-Parliamentary Alliance on China intends to keep up the pressure. It will push for a debate about Hong Kong in April. The issue puts in jeopardy an investment deal between China and the EU, which was reached in December 2020on a provisional basis but has not been ratified.

China’s state media and diplomats have tried to brush off the criticism. They say that elections will continue in Hong Kong, albeit under a system whereby candidates who are patriotic to Beijing, both elected and unelected, fill the seats in the local parliament, the LegCo.

China also makes the point that after all the disruption caused by political demonstrations and coronavirus, business in Hong Kong is booming. Share offerings have soared as Chinese companies list on the Hong Kong stock exchange, and last year the value of foreign exchange cleared through Hong Kong hit a record $11 trillion, according to the Economist magazine.

All of this raises the question of whether the outside world can do much to influence the way China handles the governance of Hong Kong or the treatment of the people who live in Xinjiang.

Donald Trump tried coercion, tariffs and sanctions to force China to change its ways but seems to have little to show for it. China’s economy is set to grow by at least six percent this year, according to its government.

As I watched online the press conferences staged by the Chinese government at the NPC in Beijing, I was struck by the way each speaker declared loyalty to the Communist Party and absolute support for Xi Jinping. There was no opportunity to express dissent, either at the meeting or through the heavily censored media.

This unabated display of faith in ‘socialism with Chinese characteristics’ is matched by a self-righteous tone in US foreign policy.

When President Biden’s new Secretary of State, Antony Blinken, met his Chinese counterpart, Wang Yi, in Alaska on March 18, he started by publicly berating the Chinese side over a range of issues, including Hong Kong and Xinjiang. This prompted an angry and defensive response from China, leaving the gathered press aghast at the harsh tone of the exchange.

Since then, many of the diplomats and Sinologists I have consulted have told me that they are expecting China to take revenge against its foreign critics.

It could, for example, pull Chinese investors out of the property sector in the UK and EU, or make life difficult for Chinese tourists planning foreign trips.

There are, after all, precedents. China was seen in vengeful mode in Asia in 2017, when the government instructed travel agencies to prevent people from taking holidays in South Korea, after that country deployed a US missile defence system, THAAD.

More recently, broadcasts of games by the National Basketball Association were halted in China after an NBA team official criticised the Hong Kong policy. At the time, China claimed that the ban was not an official action but made in response to a wave of patriotism by Chinese citizens, who, in a show of national loyalty, pulled the plug on screenings of the sport.

Foreign politicians and organisations who criticise China face a dilemma. China presents them as ‘outside forces’ which are interfering with its own affairs and this can make their campaigns counter-productive.

In Hong Kong, for instance, Western governments have sought to show solidarity with pro-democracy campaigners. But China says this simply illustrates that neo-colonial powers are conspiring with pro-independence campaigners to pull the city away from the rest of the country and humiliate China.

Since independence from Britain in 1997, many people have moved to Hong Kong from elsewhere in China and children are now often schooled in the official state language, Mandarin, rather than Cantonese. They are also starting to learn Communist Party slogans and songs.

To the rest of China, it is a welcome sign of patriotism and one they feel should not be undermined by foreign interference. To much of the rest of the world, however, it feels like the end of an era for a crucible of Asian democracy.

Duncan Bartlett is the Editor of Asian Affairs magazine and a Research Associate at SOAS China Institute, University of London. He presents the weekly podcast, China In Context