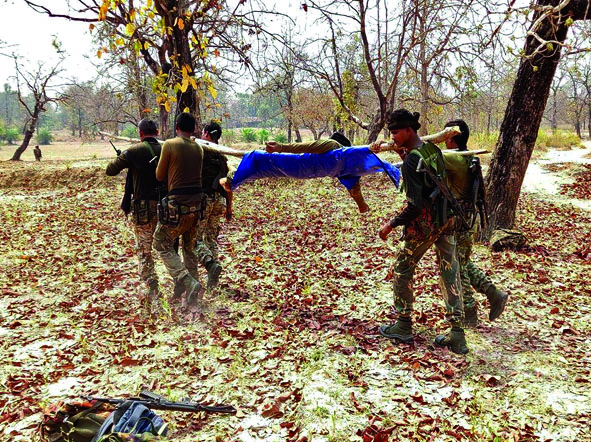 A question of intelligence

Following an upsurge in Maoist attacks in Chhattisgarh’s Bastar region, India’s security forces may need to rethink their strategy against the insurgents, writes Sudha Ramachandran

On April 3, 22 police and paramilitary personnel were killed and another 30 injured in a Maoist ambush in Sukma district in the Bastar region of Chhattisgarh. The deadliest strike by Maoists in four years, the attack in Sukma came just ten days after the insurgents blew up a bus carrying security personnel in Narayanpur district, also in Bastar.

The ambush of the troops happened amidst a massive, multi-force operation that was initiated by the security forces on the night of April 2 to apprehend Hidma, commander of the Maoists’ dreaded Battalion No 1. Apparently, the forces had received a tip-off regarding Hidma’s presence in the area and had launched the operation to seize him.

But the operation did not go as planned.

One of the teams ran into a Maoist ambush. Vastly outnumbered and outgunned by the Maoists, the beleaguered team suffered heavy casualties.

A thickly forested region that is mineral-rich, Bastar in southern Chhattisgarh is populated by ‘some of India’s poorest people – the Adivasis [tribals] predominant in this area’. Around 50-60 per cent of families in Bastar live below the poverty line compared to the national average of 22 per cent. On almost all socio-economic and health indicators, Bastar performs poorly.

Its mineral riches have drawn private and government investment and several mining companies are operating in Chhattisgarh. However, this has cost the Adivasis dearly as they have lost their traditional lands, source of livelihood and way of life. It is among these dispossessed Adivasi communities that India’s Maoist insurgents have found recruits, sanctuary and support.

The Maoist insurgency has waxed and waned over several decades. The current phase, which began in 2004 when several Maoist groups came together to form the Communist Party of India-Maoist (CPI-Maoist), has witnessed unprecedented violence and casualties.

Robust and better co-ordinated counter-insurgency operations have resulted in the elimination of hundreds of Maoist leaders and cadres. In recent years, there has been a decline in the number of Maoist attacks nationwide as well as in the geographic area under their influence.

But while there has been a decline in the number of attacks in Chhattisgarh too, the Maoist grip over Bastar remains strong.

The thickly forested terrain in Bastar, its ‘non-existent’ road and communication networks, failure of the state’s development initiatives to penetrate Maoist pockets of governance and the reluctance of the local police to take the lead in the anti-Maoist operations have been cited as the reasons for the continuing Maoist grip over the region.

In almost every major attack in southern Bastar, security forces have walked into a trap laid by the Maoists. At Minpa last year, police officials had apparently received intelligence input that the Maoists were planning a large meeting in the Elmagunda area. Teams from multiple paramilitary forces were dispatched and ended up walking into a Maoist ambush.

The Maoist ambush of security personnel on April 3 was the result of the latter acting on flawed intelligence input regarding Hidma’s presence in the area. As at Minpa last year, this time at Tekulugudam in Sukma district, the Maoists were lying in wait and killed the troops in an ensuing gun-battle.

It is evident that the state’s intelligence gathering in Bastar continues to be weak and the Maoists are exploiting this by feeding the security forces with their own ‘intelligence’ and drawing them into carefully laid traps.

Although popular support for the Maoists has declined over the years, neither the security forces nor the local administration has won the confidence of locals. This has hampered intelligence gathering in Bastar.

Importantly, India’s security establishment may need to rethink the massive operations it launches against the Maoists. The operation it launched to seize Hidma involved around 2,000 troops. As an official in the security establishment pointed out, ‘When there are large troop movements, in a large operation, senior officers fly in and fly out to Bijapur and Sukma, travel between camps happens. It is too unwieldy to be kept quiet.’

This alerts the Maoist to an upcoming operation and prompts them to set up ambushes.

What is needed to fight the Maoists, the security official said, are ‘small teams that hit based on solid human intelligence’.

Soon after the Sukma attack, India’s Home Minister Amit Shah announced that operations against the Maoists will be intensified. Yet another ‘massive operation’ has been launched in Chhattisgarh.

However, fighting the agile Maoists requires small teams of nimble-footed fighters, not a bumbling and blundering elephant that walks into traps.