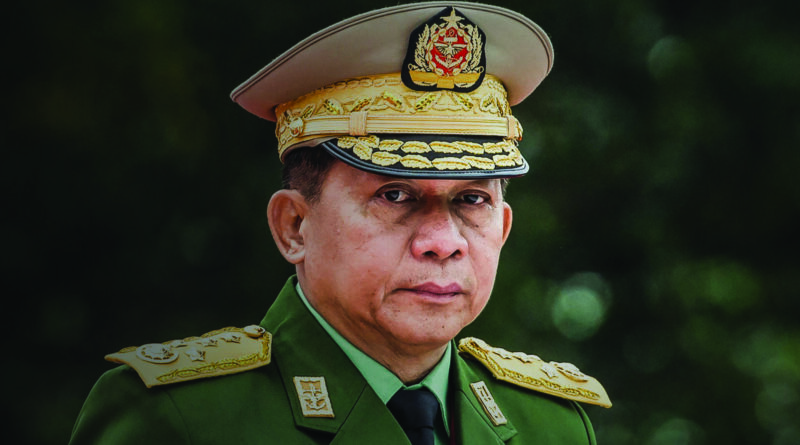 The generals who seized power in Myanmar on 1 February can hardly have anticipated the extent of the opposition they would provoke. They dismissed the National League for Democracy government of Nobel Peace laureate Aung San Suu Kyi, saying last November’s election was flawed – a claim denied by most observers – and imprisoning its leaders on the very day it was due to take office for a second term. The NLD won landslide victories at elections in 2015 and again in 2020.

The coup provoked widespread protests and civil disobedience as young people, government officers and many ordinary people took to the streets or abandoned their jobs in support of a campaign of civil disobedience. After a month, the army – known as the Tatmadaw – lost patience and opened fire on street protestors in many cities. By the end of April, around 750 civilians, including 43 children, had been killed by the police and army. The youngest fatality was a six-year-old girl. At least 3000 politicians and protesters have been imprisoned.

Coup leader General Min Aung Hlaing, who appointed himself to head a new State Administration Council (SAC), promised fresh elections and a return to democratic rule in one year. But reports from Myanmar suggest the army is rapidly losing control of the situation, despite it having always claimed to be the ‘glue’ that holds the country together.

Addressing the United Nations Security Council, Richard Horsey of the International Crisis Group (ICG) said that ‘Myanmar stands at the brink of state failure, state collapse’. His view was echoed by the Economist which described Myanmar as ‘Asia’s next failed state… not yet as lawless as Afghanistan, [but] it is rapidly heading in that direction’. The UN’s special envoy for Myanmar, Christine Burgener, told the Security Council ‘a bloodbath is imminent’.

Economic sanctions imposed by the US, UK and EU have targeted large holding companies owned by the Tatmadaw which dominate commercial life, as well as those which earn the government income from the export of jade and timber. Major investors from Singapore and Japan have pulled out of joint ventures. Unconfirmed reports suggest the economy may already be in free-fall.

Richard Horsey told the Security Council: ‘Violence cannot restore business confidence. A military rampage on the streets and in the homes of Yangon and Mandalay and other towns appears a desperate attempt to terrorise the population into submission… [The army] is able to deploy violence, but not provide any semblance of law and order.’  He lists state institutions which have already broken down, including the banking system, the ports, import and export supply chains and the health service, where there is ‘hardly any COVID-19 testing or treatment’ and vaccination programmes against COVID-19 and childhood diseases are far behind schedule.

The UN’s special envoy for Myanmar, Christine Burgener, told the Security Council ‘a bloodbath is imminent’

Meanwhile, political players described as ‘the opposition’ or ‘the resistance’, and more formally as the Committee Representing Pyidaungsu Hluttaw [Parliament] (CRPH), have formed a National Unity Government (NUG). This has two main functions: to gain support internationally for the elected NLD-led government; and to garner support and participation from the many armed ethnic organisations who operate in Myanmar’s borderlands, and who have been in conflict with the Tatmadaw since the foundation of the state more than 70 years ago.

The NUG is encouraging these regional armed groups to join in protests against Tatmadaw rule by offering to make Myanmar a federal republic with greater autonomy in the ethnically-based states – something previously promised but never delivered by Aung San Suu Kyi’s government.

Some of these armies make their money from methamphetamine production and cross-border smuggling.  Many are well armed and the armies of two, the Kachin and the Karen, have since the coup used their weapons in attacks on army bases, causing soldiers to lose their lives. Others may join once their technical ceasefires with the government come to an end, according to former colonel Kyaw Zwar Minn, Myanmar’s ambassador to Britain until April, and one of a number of senior diplomats to have been dismissed from their posts for criticising the military takeover.

Ethnic groups represented by ministerial post-holders in the National Unity Government include the Karen, Karenni, Kachin, Ta’ang, Chin and Mon, although they do not necessarily support or speak for the ethnic armies. Dr Sa, an ethnic Chin who was named as spokesman as well as minister of international cooperation, held out another olive branch by suggesting the National Unity Government will reverse the citizenship act of 1982 which led to the Rohingya community being disenfranchised.

An opposition composed of city-based dissidents and armed ethnic groups has little chance of defeating the half-a-million-strong Tatmadaw, which is well armed. However, it will thwart efforts by the army to impose its rule over the country. Myanmar journalist Thin Lei Win calls the links between the provisional government and ethnic armies ‘a silver lining’ to the military takeover, adding that Myanmar journalists have been banned from using the words ‘coup’ or ‘junta’, which the Tatmadaw believes have negative connotations.

It is difficult to gauge how strong a united force of urban dissidents and minority armies would be, and not all the 20 or more ethnically-based armies will want to join. The International Crisis Group believes that several hundred anti-coup activists have already travelled to the northern borderlands adjoining China to ‘study the art of war… including urban warfare’. Captain Lin Htet Aung, one of a number of junior army officers to have defected and taken refuge in Thailand, estimates that 75 per cent of the army ‘know what they are doing is wrong but cannot break free’.

Fearing such an opposition alliance, the regime bombed encampments of the Karen National Union in Karen State in early April, driving villagers across the border into Thailand. On the other side of the country, at least six policemen from Myanmar’s north west have taken refuge across the border in the Indian state of Mizoram. Defections so far appear to be small-scale.

Another powerful though peaceful force in this Buddhist-majority country is the Sangha, the community of Buddhist clergy, who traditionally remain loyal to the ruling authority whether military or civilian. There are reports of monks declaring their opposition to the Tatmadaw takeover and of monasteries being divided in their support, but these are difficult to authenticate.

In late April, General Min Aung Hlaing attended a summit of the Association of South East Asia Nations in Jakarta – his first diplomatic outing – amid signs that ASEAN leaders were losing patience with Myanmar’s departure from democratic norms. The Tatmadaw leader offered his counterparts no concessions, and the summit declaration watered down an earlier call for the State Administrative Council to release political leaders.

With the international community seemingly powerless to intervene, Myanmar appears to be heading for a long civil war. Whether it will endure as long as those in Syria or Afghanistan depends on how soon the Tatmadaw can enforce its authority over the people and how fiercely the opposition fights back. What seems inevitable is another period of economic collapse, reinforcing the country’s position as the most impoverished nation in South East Asia.

Nicholas Nugent reported from Burma during an earlier military uprising. He is co-author of CultureSmart! Myanmar