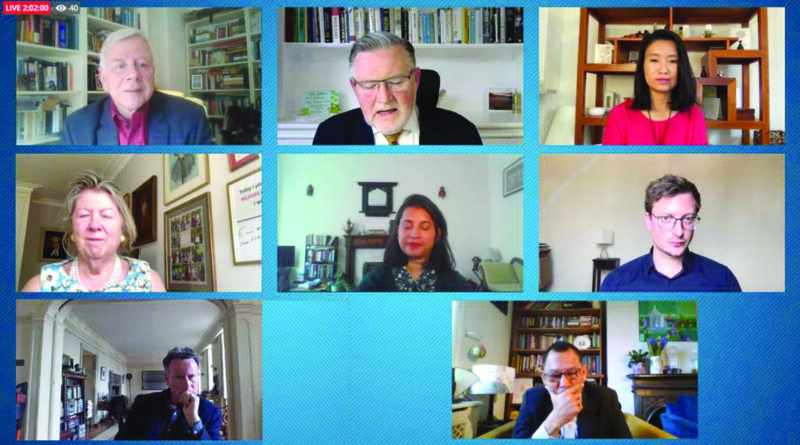 The brutal military takeover in Myanmar, its repercussions and the regional and international response were among themes for debate at a recent Democracy Forum conference

Myanmar’s military, on February 1, destroyed a decade of hope for the Southeast Asian nation of 54 million. The trail of killings and arrests also exposed the shifting balance of power which has thrown the region and the wider international community into flux.

So where does Myanmar go from here?

April’s Democracy Forum debate, titled ‘Myanmar coup: a blow to democracy’, drilled down on this question. Hosted by former BBC Asia Correspondent Humphrey Hawksley, its expert panel took the discussion from Myanmar’s bloodied streets into the minds of its military leaders and onto the numerous insurgencies, asking constantly what domestic, region or international solutions might work.

The Democracy Forum President, Lord Bruce, opened with a telling quotation from the author George Orwell, who had worked as a police officer in what was then British-controlled Burma.  In his famous novel 1984, Orwell wrote, ‘Always there will be the intoxication of power… if you want a picture of the future, imagine a boot stamping on a human face – forever.’

Lord Bruce described Orwell’s analysis as ‘an almost exact photo-fit prediction of why General Min Aung Hlaing reacted in February, and how he intends to recover control of Myanmar’.

Journalist Thin Lei Win, who founded the Myanmar Now news agency in 2015, spoke of the media crackdown with more than 70 journalists arrested and many still in detention. She pointed out, however, that journalists’ work in Myanmar had always been dangerous.

‘When the National League for Democracy was in power, many media outlets and journalists faced arrest, threats, lawsuits and, in the worst cases, attempts to their lives,’ she said.

Thin then reflected on a theme that ran through the debate: the resilience and bravery of Myanmar’s younger generation. ‘Every day we receive images, videos, and news of events across the country,’ she explained. ‘Just in the last few weeks we’ve seen at least five new analytical journals appear, and they’re now being published through a pirate radio station called Federal FM.’

Dr Maung Zarni, co-founder of the Forces of Renewal Southeast Asia, laid out the history and motivation of the Tatmadaw, the official name of the Myanmar military

‘It was founded by Japanese naval intelligence in 1942 with Aung San, father of Aung San Suu Kyi, at its head,’ he said, describing it as a marriage of convenience aimed at ending British colonial rule, and adding that ‘Myanmar has ended up with a military that retains both colonial and fascist characteristics’.

The historic role of Aung San Suu Kyi’s father had left her in a contradictory position, Dr Zarni argued, both fighting for democracy while, on a personal level, wishing to uphold her father’s legacy.

The Tatmadaw drew its power from interlocking business and personal interests, including intermarriage with wealthy and influential Chinese families. ‘The Burmese military leaders and their families have been able to tap into Southeast Asians in a network of Chinese in banking, shipping and others, and that’s how they stash their wealth. So, there is a mafia.’

Dr David Brenner, from the School of Global Studies at the University of Sussex, moved the debate towards Myanmar’s numerous insurgencies and ethnic communities which, he said, made up some 40 per cent of the country. Author of Myanmar’s Borderlands, Dr Brenner challenged the European Union’s assessment of progress after the signing of a 2015 nationwide ceasefire agreement.  The EU’s assessment was ‘fundamentally not true’, he said.

‘The dominant narrative is inherently problematic,’ he insisted. ‘The ceasefire agreement was never nationwide, and it only encompassed a few armed groups in the country.’

Using a map that showed the extent of ethnic territory, Dr Brenner said that ‘the Tatmadaw’s power and profit has long relied on stoking ethnic conflict. The military’s almost half million soldiers would not exist without that kind of constant manufacturing of conflict. Donor money has been going straight into the hands of militarised bureaucracies, fostering fragmentation’.

Dr Mona Adhikari, a specialist in conflict resolution at Keele University, pointed out the ‘absence of consensus’ among foreign governments on exactly what has happened in Myanmar. Thailand, for example, described the coup as an internal affair, while Chinese state media referred to it as a cabinet reshuffle.

Myanmar’s two bigger neighbours, China and India, had contradictory interests, while the Association of Southeast Nations was in a quandary. If ASEAN broke its long-held principle of non-interference in members’ internal affairs, then what would it do about other Southeast Asian problems like the insurgency in southern Thailand?

‘The Tatmadaw understands the shifting symmetry,’ concluded Dr Adhikari. ‘And there’s an overwhelming concern about over-dependence on China.’

Then came a warning from Baroness Mary Goudie that, unless the conflict ended, Myanmar risked ending up like Syria. Lady Goudie, who has been involved in Myanmar since 1986, argued that the way forward was to start talks with everyone at the table, including leaders of the military and of the Rohingya community. Any resolution would need recognition of abuses carried out against the Rohingya community and for them to be given official status within Myanmar.

That would not be quick or easy. ‘I mean not five minutes (of talks),’ she said. ‘I mean month after month. And if we don’t bring everybody, we are not going to get peace. It will be a lot of talking, before you even get the first line of peace.’

Summing up, Barry Gardiner, MP and Chair of The Democracy Forum, described Myanmar as being between a fallen angel and the Devil.  He recommended that governments needed to be careful about their response, particularly on sanctions.  ‘Are they going to be effective?’ he asked. ‘Are they actually going to change the situation?

But he ended on a more upbeat note, reflecting the generational themes that had run through the debate.

‘This generation has much greater experience of freedom,’ he said. ‘I was struck by the signs the protesters were putting up, which were really very witty. Here you have a generation which is incredibly media savvy with a much greater awareness of how to internationalise their protests.’

The question remained, however, of what, if anything, the regional and global communities could or would do to dilute the power and brutality of Myanmar’s military regime.