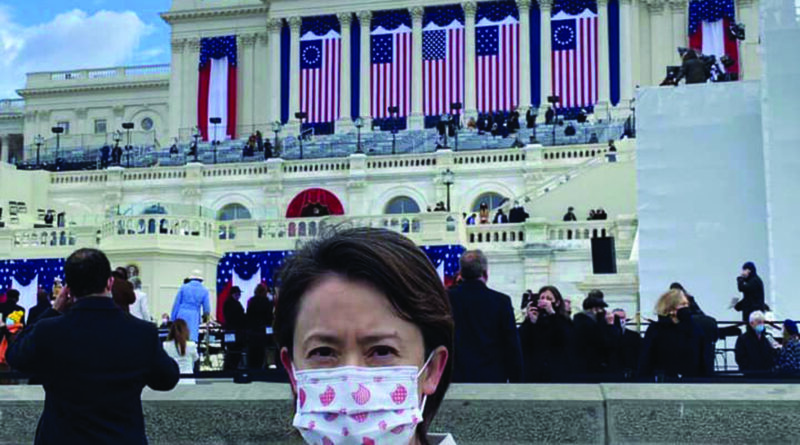 Humphrey Hawksley’s  recent interview with the Taiwanese representative to the US revealed a flexible, pragmatic envoy with staunch views on her country’s future

I first met Hsiao Bi-Khim on a sidewalk during Taiwan’s 2008 election campaign. Sitting on a low plastic yellow stool, wearing a stylish white trouser suit, she was stuffing leaflets into envelopes. An elderly couple came up and greeted her. She gave them a pile, set them to work, then turned her attention to my question.

Hsiao was a candidate for the ruling Democratic Progressive Party, founded in the mid-1980s on a platform of winning formal independence from China. She is now her government’s representative to the US, although not technically an ambassador because under the One China Policy, Taiwan has no diplomatic status in America and most of the world.

Yet, in January, Hsiao managed to win an unprecedented formal invitation to attend the presidential inauguration. ‘I think it is a recognition that Taiwan is a partner in democracy and that’s important,’ she told me when I saw her recently in Washington DC.

It is also a signal as to how much global politics has shifted.

One of Hsiao’s campaigning issues in 2008 was that Taiwan should be recognised within the United Nations, a demand so sensitive that then US president George W Bush openly told the government to shut up and stop rocking the boat with China.

Back then, Western democracies saw China as an ally, a miracle worker of development and poverty alleviation. Taiwan was an upstart. Although its democracy was mentored by America, its overt push for independence showed it was getting ahead of itself and risking a delicate global balance.

‘Why are you still pushing this independence, UN idea?’ I asked Hsiao at that time. ‘A lot of people argue that democracy isn’t suitable for some societies, like China, the Middle East and Africa.’

‘China is run by an authoritarian government,’ she said sharply, pulling out a plastic stool for me to sit on. ‘We’ve worked for decades to get rid of authoritarianism in this country. All we are asking is for our achievements to be recognised. We see the Americans praising the people of Iraq for having the courage to go to the polls and vote. Yet at the same time they’re condemning us for holding a vote to express our desire to be part of the international community.’

Nearby, on the noisy Taipei street, a cartoonist sketched the two presidential candidates as pro- and anti-China warriors brandishing flags against each other across the Taiwan straits.

Taiwanese voters did not want a scrap with China and chose the Nationalist (KMT) candidate Ma Ying-jeou.  Hsiao lost her seat.

Four years later, however, she won. Her DPP party was back in power in 2016 and, in 2020, Hsiao was appointed to Washington.

This year, we met at Twin Oaks, Taiwan’s ornate 18th century mansion, set in an 18-acre estate in DC. In a tastefully decorated greeting room, sitting socially distanced and far removed from the chaotic energy of that Taipei street so many years ago, Hsiao’s views remained strident and unchanged.

‘We created a democracy that wasn’t transplanted by a foreign regime,’ she told me. ‘It was a process of domestic evolution. There were many fights and challenges.’

Behind her pastel Covid mask, her expression carried the same passion and certainty, but with a sense that, slowly, her arguments were winning through.

Hsiao is the daughter of a Taiwanese father and American mother. Her childhood and upbringing during the martial law regime ran parallel to Taiwan’s slow and mostly peaceful transformation from dictatorship to democracy.

‘Politics was a dangerous pursuit. My small acts of rebellion would be listening to Western music, like George Michael. Martial law was still very much a controlling aspect over education and what could be talked about.’

Then the family uprooted and moved to New York, where Hsiao’s father, a theologian, had a new job.

Hsiao’s eyes were opened to another world.

‘I worked in a part-time job in my college library, and there were books about democracy that had been banned in Taiwan. I started to gain a different perspective on our history. I was like, “Wow”. It was quite an awakening.’

She followed her natural rebellious streak by joining the fledgling DPP, but stayed in the US. In 1996, she was planning a post-graduate degree in political science while Taiwan was preparing for its first presidential election.  A furious China warned of missile strikes, and the US sent an aircraft carrier to the Taiwan Strait.

‘China was threatening our first ever exercise in democracy. I found that unacceptable.’ Hsiao could no longer remain reading books in a college library. She jumped on a plane and went back home.

I asked the same question now as I had in 2008, about whether combative Western style win-lose democracy is suitable for some Asian cultures, particularly when reputation, or what is known as ‘face’, is at stake.

‘This cultural aspect is applied by authoritarian leaders,’ she countered. ‘It’s an excuse. An important process of democracy is learning from failures, overcoming challenges. I’ve been in politics long enough to have personally been through the ups and downs of winning and losing and accepting that as a normal part of democratic life.’

And, here, in Washington, where you have no diplomatic recognition? I asked. How on Earth can you work effectively?

‘You know the wolf warrior?’ She was referring to a term used to describe Chinese diplomats and their current confrontational rhetoric. ‘Well, I’m a cat warrior. Cats are kinder and more reliable. We are flexible, pragmatic, survive in harsh environments, show up in unexpected places and we won’t be coerced into submission. That’s pretty much how I work here.’

As I was leaving, I remarked that even America, Taiwan’s democratic mentor, has been through a traumatic transition, with the storming of the Capitol and allegations of a rigged election.

Hsiao diplomatically cut me short and handed me a gift bag. Inside were stylish face masks in pastels of blue, greens and reds. ‘In Taiwan, we try to keep things bright and people safe,’ she said.

I thanked her and tried again. ‘And the problems here?’

She smiled, her eyes twinkling behind her mask. ‘We don’t comment on domestic issues within the United States.’

Humphrey Hawksley is an Asia specialist and former BBC Beijing Bureau Chief. His latest book, Man on Fire, was published in April