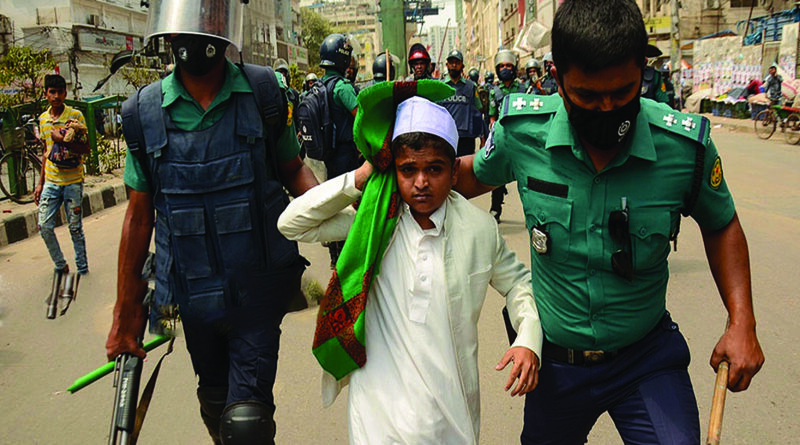 From ‘Little Devil’ to Big Brother

Fifty years since its creation, Bangladesh must contend with the rise of violent and divisive Islamists, intent on threatening the country’s secular stance. Yvonne Gill reports

Even as Bangladesh celebrates the golden jubilee of its liberation from Pakistan and the 100th birth anniversary of ‘Bangabandhu’ (Friend of Bengal), Father of the Nation Sheikh Mujibur Rahman, who led the country to freedom from the quasi-colonial clutches of an Islamic Pakistan’s Punjabi-Sindhi oligarchy, the young nation’s battle against religious fanaticism continues unabated.

In 1971, Bangladesh emerged as a free nation, after becoming part of Pakistan in 1947, based on the fundamentally flawed ‘two-nation’ theory that Hindus and Muslims were separate nations. This freedom heralded a new era of secular Bengali nationalism.

But the quagmire of religious fundamentalism has clung to the country’s social fabric. Pakistan, stung by the devastating defeat of its separate Muslim nation narrative, has since been insidiously active in the newly-formed secular democracy, through its erstwhile proxies in the political sphere as well as its umbilical links in Bangladesh’s armed forces.

From the gruesome massacre of Mujibur Rahman and 23 members of his family in a military coup in 1975 and the return of the Bangabandhu’s daughter Sheikh Hasina as Prime Minister following the Awami League’s victory in the 1996 parliamentary election, Bangladesh has come a long way. Today it is South Asia’s fastest growing economy. Nevertheless, religious bigotry still plagues the country, with secularism and progressive thought under constant attack from the religious right.

India played a sterling role in training the Mukti Bahini, the Bangladeshi guerrilla force that confronted the heavily armed Pakistani forces involved in genocide in what was then East Pakistan, now Bangladesh. In the most trying conditions, India’s armed forces dealt the final death blow to Pakistan militarily, liberating Bangladesh in a swift 13-day operation. Since then India has stood by its neighbour in times of crisis, while strictly adhering to a policy of non-interference in Bangladesh’s internal affairs.

Prime Minister Sheikh Hasina has come down heavily on the Islamists

Now, Bangladesh is again facing trying times. From the child preacher ‘Little Devil’ to the Big Brother ISI (Inter-Services Intelligence), antinational groups and cliques financed by Pakistan are out to lay siege to Bangladesh. While Prime Minister Sheikh Hasina has launched a countrywide crackdown on these divisive elements, the opposition Bangladesh National Party – led by Khalida Zia, who is serving a 17-year jail sentence on corruption charges – and pro-Pakistan political and religious groups like the banned Jamaat-e-Islami, Hefazat-e-Islam Bangladesh (HIB) and other fringe elements have upped their ante.

Their vicious campaign culminated in large-scale violence in different cities during Indian Prime Minister Narendra Modi’s visit to Dhaka on March 26-27, to attend celebrations marking the 50th anniversary of the country’s independence and the birth centenary of ‘Bangabandhu’. The mayhem on the streets resulted in several deaths as police fired on the crowds.

Coverage of Modi’s visit was coordinated with online livestreaming of the protests with ‘Modi ke khilaf’ hashtags on social media. The Pakistan embassy is reported to have hired camera crews to extensively cover the violent demonstrations. Protests against the Indian Prime Minister’s visit gathered pace after Friday prayers at Dhaka’s Baitul Mukarram mosque, when a group of Hefazat supporters held their shoes aloft in a show of disrespect to the visiting premier. Violence erupted in the eastern border district of Brahmanbaria, where HIB supporters clashed with police and border troops, leading to several deaths. Clashes also broke out at a mosque in the capital Dhaka, though Hathajari, Chittagong and Brahmanbaria were the worst affected.

Bangladesh’s madrassas (religious seminaries), which have been allowed to flourish by consecutive governments, have spawned a culture of religious intolerance and violence. Indeed, the protestors who took to streets were mostly madrassa students. Others were activists from opposition parties and extremist religious organisations. Ordinary Bangladeshis generally stayed away.

The religious card has been a handy tool for politicians. Even Sheikh Hasina has been playing it against her main rival Khalida Zia, whose BNP was wiped out in the 2018 elections. Hasina is alleged to have propped up the HIB, which has a network of thousands of madrassas, to counter the pro-Pakistan Jamaat, a close ally of the BNP. Today, however, the HIB has become the refuge of all sorts of pro-Islamic, pro-Pakistan and anti-democratic elements, besides being infiltrated by Jamaat-e-Islami.

The kind of fanatic rabble-rouser these madrassas produce is personified by Rafiqul Islam Madani, who has been charged with making provocative anti-state speeches and inciting mobs. Yet he has become a youth icon among extremists and was seen, along with the HIB General Secretary Mamunul Haque, at Dhaka’s Baitul Mukarram mosque during the shoe-wielding episode. When police arrested Haque, they found pornographic material on the cleric’s mobile phone.

Madani’s immature voice and slender physique has earned him the title of ‘child preacher,’ though he is actually 27 years old. Bangladeshi journalist Salim Reza also labels him a ‘little devil’, full of hatred against non-Muslims and progressives, and influenced by Taliban/ISIL ideology.

‘All temples are being upgraded and the mosques here are dying. This means whoever speaks against Modi will be tortured and jailed… We will not allow this… We want this country to be a true Islamic Republic,’ Madani rebukes the Awami League government in one of his videos. In another, he declares: ‘We have to free this country and Islam from the clutches of this infidel government. There would be one religious Head for all Islamic institutions. Under his direction, we will paralyse the government and liberate this country from the hands of the mafias.’

Prime Minister Sheikh Hasina has come down heavily on the Islamists, saying Bangladesh ‘is a secular country, no one should be attacked in the name of Islam. These militants are a shame for the Muslims. They will not be spared’, and insisting that Bangladesh is taking all measures to eradicate terrorism.

The High Commission of Pakistan has been the centre of terrorism and fake currency distribution, Awami League leaders allege. The then chargé d’affaires Shah Faisal Kakkar and defence attaché Brigadier Kamran Malik reportedly tried to influence the 2018 elections. Several members of the Bangladesh Parliament, or Jatiyo Sangsad, took to social media to blame Pakistan and its Inter-Services Intelligence (ISI) for instigating the recent protests and secretly financing and encouraging Islamists against India.

The Bangladesh parliament’s official Twitter handle slammed ‘Pak HC #Dhaka’s #SecretFunding for @HIBofficial @Hefazot to protest against India & its PM @narendramodi. We, #secular & #democratic people of #Bangladesh condemn this attempt by Pak agency #ISI’. Another tweet said, ‘#Shame on @GovtofPakistan, protector of #Terrorists around the globe’. Both tweets were later deleted, but the message had been sent.

Hefazat-e-Islam came into being in 2010, following a series of violent protests in 2008-9 against a bill on women’s inheritance rights. An organisation of ulemas (a body of Muslim scholars who preside over a huge network of madrassas), HIB was headed by Allam Shah Ahmed Shafi, who was educated at Darul Uloom Deoband in India. Although Shafi was against Pakistan, the HIB brought together right-wing elements who were isolated after the Awami League victory and crackdown on pro-Pakistan extremist outfits and parties.

The group had literally occupied Dhaka in May 2013 with a 13-point charter of demands, leaving a trail of death and destruction. Scores lost their lives before the government was able to control the situation. A beleaguered Sheikh Hasina decided to send conciliatory signals to HIB. She addressed their rally as the chief guest and acceded to such demands as introducing legislation to rein in ‘atheist’ bloggers, removing Darwin’s theory of evolution from textbooks and other ‘un-Islamic’ essays, and giving government recognition of a top madrassa degree in Hadith as equivalent to a Master’s degree.

The HIB reportedly supported the Awami League in the 2014 and 2018 elections, but kept up the pressure of its radical agenda on the government. This included demands that the death penalty be imposed for blasphemy, and removal of murals and statues from public places because the mullahs decreed these as un-Islamic. It launched agitation in January 2017 for the removal of a statue of the Greek goddess Artemis (or lady justice) from the Supreme Court premises. The government promptly had the statue removed.

After Ahmed Shafi’s death in September 2020 under suspicious circumstances, the HIB leadership has been captured by a more radical faction, close to the BNP and allies like Jamaat-e-Islami, Islami Oikyo Jote and Islami Chattra Shibir. In the power struggle to take control of the group’s 25,000-plus madrassas and other assets, Shafi’s son was defeated by Hadith scholar Junaid Babunagari, educated at the Binnori town madrassa in Karachi, Pakistan.

Under Junaid, the HIB’s 151-member committee was reconstituted to include 34 members of Jamiat-e-Ulama-e-Islam (JUI), a BNP-led alliance partner, 16 leaders of Bangladesh Khelafat Majlish, four from Islami Oikya Jote and six from Khelafat Andolon – informally transiting the organisation from a religious organisation to a semi-political body of pro-Pakistan elements. Originally, the HIB bylaws had debarred political leaders from becoming office bearers.

Currently, HIB is spearheading an alliance of anti-liberation, pro-Pakistan forces with designs on the Islamisation of Bangladesh. One of the first campaigns HIB undertook after Junaid Babunagari took over was to protest against the construction of statues in the memory of Bangabandhu. Last December, even before he had taken over as HIB chief, a statue of Sheikh Mujibur Rehman was defaced in Kushtia soon after Babunagari gave a speech inciting mobs. The government responded by slapping sedition charges on the cleric. But the new coalition of pro-Pakistan Islamists has threatened a bloodbath across Bangladesh if the government goes ahead with its plans to commemorate Mujibur Rehman’s birth centenary with statues depicting him.

Meanwhile, the Awami League government appears determined to crush the movement by taking recourse to legal and police action. Probes into 83 cases of HIB ‘terrorist activities’ from 2013 onwards are being revived; leaders are being arrested and a strict watch is being kept on suspicious elements.

And so the war of wits between rational thought and bigotry rages on across the hot, humid terrain of this densely populated land.