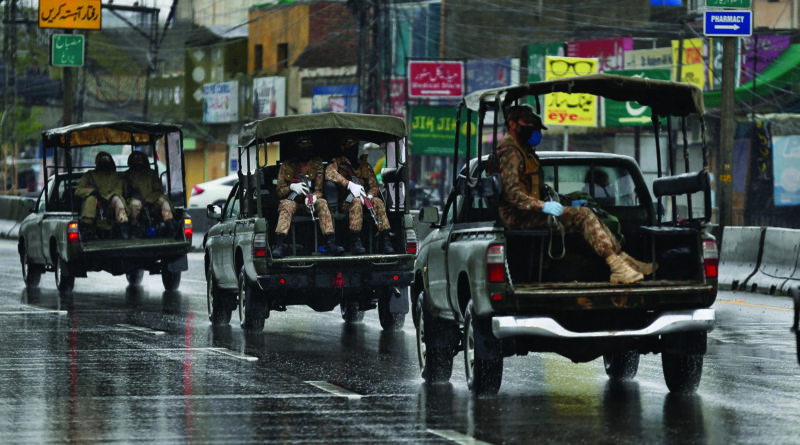 With the country in the grip of another Covid wave, Pakistan’s volatile political scenario has taken a back seat – for now. Rahimullah Yusufzai assesses the situation

The political confrontation between Prime Minister Imran Khan’s government and the now divided opposition has subsided. But the situation in Pakistan is far from normal, as the third wave of the Covid-19 pandemic plays havoc with people’s lives and the national economy.

Such is the severity of the situation that the government has called in the army to enforce standard operating procedures (SOPs) to prevent a further spread of the disease. The soldiers will help the police and the law-enforcement agencies to deter the public from violating the SOPs, which include wearing face masks, maintaining social distancing, frequent hand-washing and avoiding public gatherings. Most people have been ignoring the SOPs, despite the rise in Covid-19 cases. The army is being deployed as it is deemed capable of enforcing the SOPs in a more forceful way than the police, rangers and other law-enforcement personnel.

This is a desperate move, born of the fact that repeated government appeals for the public to follow the SOPs were falling on deaf ears. Gradually, new and tougher measures were announced by the National Command and Operation Centre (NCOC), a body with representation from civil and military authorities and healthcare professionals, in a bid to check the increase in coronavirus cases, but the situation did not improve. The government has warned it could impose a complete lockdown in major cities, after having unsuccessfully tried ‘smart lockdowns’ in localities badly affected by the pandemic.

However, there are fears that a complete lockdown would damage the already battered economy and render a large number of people jobless. The government has avoided shutting down the country again, as the strict lockdown during the first Covid wave created serious economic problems and prompted the already cash-strapped government to arrange handouts to the most vulnerable sections of society, including daily-wagers and owners of small businesses, through a one-time relief package.

To highlight the gravity of the situation, the prime minister, in an April 23 speech to the nation, warned that following the SOPs was necessary to avoid the example of India, which is now reporting the highest daily number of Covid-19 cases in the world. Khan argued that half the problem would be solved if people start wearing masks. He also expressed solidarity with India for coping with the ‘dangerous’ coronavirus situation, in which he was joined by many Pakistanis as they wished the Indians well. The Edhi Foundation, a large charity organisation founded by the late Abdul Sattar Edhi, offered a fleet of 50 ambulances along with staff to assist India in tackling the challenge.

This illustrated the recent slight improvement in relations between India and Pakistan, who have revived the 2003 ceasefire agreement on their borders and tried to resolve the issue of river water sharing by arranging a long overdue meeting of their water commissioners. Imran Khan even disclosed that Pakistan had decided to buy coronavirus vaccines from India, but New Delhi could not supply the required doses due to its own pressing needs. Pakistan has received some vaccines donated by China and has made an agreement with Beijing to buy more, but the Chinese, too, are hard pressed to meet their own needs and supply other countries under deals made earlier.

There is real concern that Pakistan’s inadequate healthcare system could buckle under pressure, as is happening in India, if coronavirus cases keep spiralling. Already, some hospitals are reporting shortages of beds and medical oxygen for Covid-19 patients, although the situation is not as grim as that being reported from India. Producers are warning that Pakistan is heading towards an acute shortage of medical oxygen, even though production units are now operating at 90 per cent capacity.

Some of the latest measures announced by the NCOC to curb the spread of the pandemic include closing schools in districts with more than five per cent positivity rate; shutting down markets at 6 pm; banning both indoor and outdoor dining till Eidul Fitr, the religious festival that follows the fasting month of Ramadan and will be celebrated in mid-May; limiting office time and allowing only 50 per cent of staff to work at their workplaces. Yet there have been reports in the media that some of these new SOPs are already being flouted, which explains why the army’s help was sought to enforce them.

The NCOC reported 157 deaths countrywide from Covid-19 on April 24, while the number of new infections stood at 5,908. Total deaths from the pandemic have risen to 16,999. The number of infections since the start of the pandemic is 790,010, active cases presently are 86,529 and the positivity rate is said to be 11.27 per cent. But these numbers may not depict the real situation, as testing numbers are not very high and many cases in villages and remote areas go unreported.

All this is happening at a time when the political situation has calmed down after a volatile period late last year and in early 2021. But the opposition is still very critical of the Pakistan Tehreek-e-Insaf (PTI) government of Prime Minister Imran Khan, calling it incompetent and terming the latter ‘selected’ rather than ‘elected’. Demand for fresh elections are still being made as the opposition parties believe those in July 2018 were rigged in favour of Imran Khan by the ‘establishment’, which generally means the military and civil authorities.

However, the ten-party opposition alliance, Pakistan Democratic Movement (PDM), is now a divided house and its plan to stage a ‘long march’ to Islamabad to paralyse the government has been shelved. The PDM has almost split into two camps, with the PPP, led by the Bhutto and Zardari family, and Asfandyar Wali Khan’s ANP in one camp and the remaining eight parties, including major ones like Nawaz Sharif’s PML-N and Maulana Fazlur Rahman’s JUI-F, in the other. The latter camp wants all the opposition lawmakers to resign to put pressure on the government to quit, but the PPP (which is in power in Sindh province) and the ANP are against this move. The blame-game between the two camps has caused bitterness in their relations and made it difficult to reunite the PDM.

The government is pleased with this turn of events as it no longer fears the launching of a mass movement against it. However, internal party disputes, the recent violent protests undertaken by the far right Tehreek-e-Labbaik Pakistan (TLP), and the economic difficulties exacerbated by the pandemic have become potent challenges to the PTI’s rule.

A growing number of PTI lawmakers are rallying to the banner of the party’s former secretary general Jehangir Khan Tareen, a sugar baron who formerly served as a federal minister and is credited with persuading independent MPs to join the PTI to enable it to form its government in the centre and in Punjab province after the 2018 polls. But, along with his son, Tareen is facing a court case for manipulating sugar prices to make huge profits. If he is arrested or convicted, his supporters could ditch the PTI and reduce its thin majority in the National Assembly and Punjab Assembly.

The PML-N, which recently won a National Assembly by-election against the PTI in Dask, proving that Punjab remains its stronghold, was jubilant when its President Shahbaz Sharif, who is facing charges of money-laundering and having assets beyond his known sources of income, was released on bail by the Lahore High Court on April 23.

However, the legal woes of his elder brother Nawaz Sharif, who has been in the United Kingdom since November 2019 after going there for medical treatment, and has refused to return to Pakistan to complete his imprisonment and face court cases, are far from over. An accountability court has now ordered seizure of his properties and allegations have been made against him of acquiring state land to build his sprawling residence at Raiwind near Lahore. The Sharif family has denied all these charges, insisting they are all part of a campaign of political victimisation.