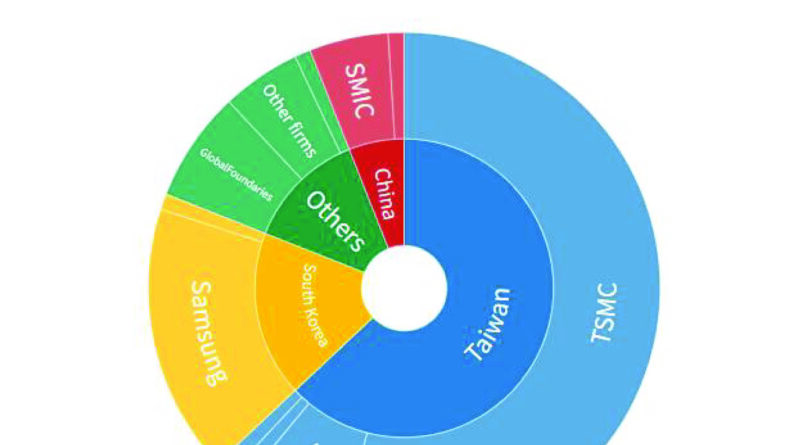 Taiwan: captain of the chip

Wealthy CEOs from the world’s leading tech companies are pleading with Taiwan’s semiconductor makers to increase production. But China’s threats to reunite the island with the mainland – by force if necessary – are creating a strategic risk for business, warns Professor  Duncan McCampbell

Even though the global economic slump caused by the pandemic has been a disaster for many businesses, this past year has created new opportunities for some powerful multinationals.

One such fortunate company is the US-based computer manufacturer, Hewlett Packard. Earlier this year, it blew away Wall Street analysts by announcing a first quarter net revenue of US$6.8 billion.

‘We delivered a strong Q1 performance,’ said Antonio Neri, president and CEO of Hewlett Packard Enterprise, ‘because the global pandemic has brought a renewed focus on digital transformation. Businesses are rethinking everything, from remote work and collaboration to business continuity and data insight.’

After winning praise from investors, Mr Neri’s colleague, Hewlett Packard’s President and CEO Enrique Lores, used some of the company’s money to charter a private jet to Taiwan.

According to Taiwan News, he stayed for less than 24 hours, during which time he maintained a social distance of 1.5 metres from everyone he met and abstained from eating any food. Dinner was served back on board his plane, on the flight home to the United States.

But he didn’t need to be wined or dined by Taiwan’s semiconductor suppliers. He is already a committed customer. HP depends on Taiwan for many of the chips that are the core components of its products.

The majority of computer chips today are made under contract in foundries, or fabs. Asia is home to around 80 per cent of the world’s fabs, concentrated in two countries and companies: South Korea’s Samsung and Taiwan’s Taiwan Semiconductor Manufacturing Company (TSMC).

Although Taiwan is a small island, with a population of only about 24 million people, it has an outsize economy. In the fourth quarter of 2020, TSMC’s share of the global foundry market was 55 per cent, with Samsung at 16 per cent. Samsung is said to be a generation behind TSMC in the production of the most advanced chips, such as the ones powering Apple’s newest iPhones. USA-based Intel is even further behind.

Enrique Lores is not the only business titan arranging a private meeting with the Taiwanese chip makers. The American billionaire businessman Elon Musk is also rumoured to be heading to Taiwan soon to negotiate a stable supply of chips for his famous Tesla automobiles.

Although Taiwan is a small island, it has an outsize economy

Automakers have been hardest hit by a recent shortage of chips. Anticipating slow spring sales because of the pandemic, they downgraded orders, leading chipmakers to shift production to other product lines.

Then the suppliers in the US hit a crisis. In the so-called Texas Freeze this past winter, factories in the Southern US were left idling.

The industry took a further blow in March, when a catastrophic fire ripped through a factory in Ibaraki prefecture in Japan, owned by Renesas. It damaged more than 20 machines and exacerbated a shortage of semiconductors, especially those supplied to Japanese automakers.

Each of today’s new cars contains anywhere between 50 and 150 semiconductors. Chip shortages therefore have a dramatic impact. Ford and GM warn that the problem will wipe billions of dollars from their profits this year.

US President Joe Biden sees a clear threat in all this to America’s nascent economic recovery.

In mid-April, he hastily convened a White House summit of the world’s leading chipmakers.  A few days later, Japan’s Prime Minister, Yoshihide Suga, became the first foreign head of government to visit Mr Biden in Washington. They discussed the business relationship between the US and Japan, as well as strongly reaffirming their defence and security alliance.

In their joint statement after the meeting, Mr Suga and Mr Biden specifically mentioned Taiwan. In the past, Japan has avoided rhetoric which goes against China’s deeply held wish to unite Taiwan with the mainland.

This spring, Beijing has been reminding Taiwan and the world of its claims, sending squadrons of fighter aircraft into Taiwanese airspace and conducting live-fire naval exercises. The US, though obligated under a 1979 law known as the Taiwan Relations Act to supply Taiwan with military hardware, has no formal defence agreement with Taiwan.

Professor Christopher Hughes at the London School of Economics thinks a Chinese invasion is unlikely. He says military preparations for an attack could not easily be concealed, permitting timely deterrence by Taiwan’s friends, notably the US. ‘And with Taiwan producing about half of the world’s processors,’ adds Hughes, ‘a Chinese invasion would be an economic catastrophe for the world, including China.’

China needs Taiwan’s chips, as much as Taiwan yearns for the huge Chinese market. In its 14th Five Year Plan, published in March, the Chinese Communist Party set out a clear ambition to be more self-reliant in technology. At present, only about 30 per cent of the semiconductors used in Chinese-made products are produced in China.

Very few incorporate Chinese designs or technologies, making China the world’s largest importer of chips. Nearly 100 billion semiconductor devices were imported into China in the first two months of 2021, up more than 30 per cent from the same period a year earlier.

Companies and countries which are reliant on Taiwanese chip production are increasingly concerned by rising tension on the Taiwan Strait. They are not standing still.

Governments around the world are subsidising the construction of semiconductor factories, with money seemingly no object.

For example, the US-based Intel, which has fallen behind TSMC and Samsung in the high-end chip arena, recently announced that it will spend $20 billion to build two fabs in Arizona. This came after TSMC’s 2020 announcement that it would build a $12 billion plant in the same state. Samsung, which already has a chip plant in Austin, Texas, is currently eyeing four potential US sites for a new $17 billion chip plant.

The EU, buffeted by the US trade war with China, but making only 10 per cent of the world’s chips, is now developing a wide-reaching plan to achieve ‘strategic autonomy’ in semiconductors. Discussions are progressing with Samsung, Intel and TSMC to build chip production facilities in several EU countries.

India also sees an opportunity. The Indian government is planning to give cash incentives of more than $1 billion to companies prepared to set up chip fabrication units. Local companies will be instructed to buy made-in-India chips for their products, thus ensuring new fabrication units have plenty of nearby customers.

All of that will take time, of course, which leaves Taiwan clearly in a strong position financially, despite its precarious location next to an increasingly assertive China.

The big unanswered question is whether China would risk huge disruption to the world’s most crucial tech industry, in order to forcefully put an end to Taiwan’s autonomy.

Duncan J. McCampbell, J.D. is an American lawyer and associate professor of international business and law at Metropolitan State University in Minnesota, USA. Following a career in private law practice, he logged 14 years with the Westlaw International division of Thomson Reuters, with foreign postings in London, Frankfurt and Beijing. Whilst living in Beijing he led the project which built and launched Thomson’s first character-based legal online product, Westlaw China. He is a China expert in the Foreign Policy Association’s Great Decisions program and author of the China I Know series.