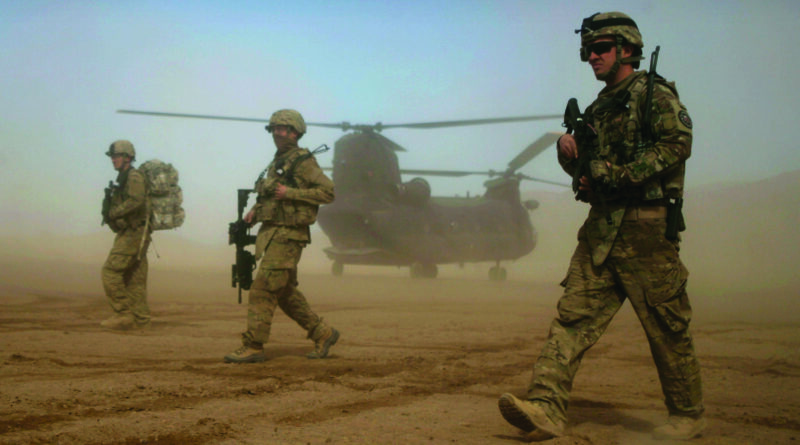 American soldiers will not fight in Afghanistan after September 11 this year, vows President Biden. Yet peace remains elusive, and attempts at getting rival factions into meaningful talks have so far proved unsuccessful. Dawood Azami considers the responsibilities of regional players

The US-led war in Afghanistan started a month after the 9/11 al-Qaeda attacks on the World Trade Centre and the Pentagon in 2001.

Its initial goal was to hunt down al-Qaeda’s leader, Osama bin Laden, who had been hosted by the Taliban regime in Afghanistan.

However, the war dragged on long after bin Laden was eventually found in Pakistan and killed by US forces in 2011. In fact, Afghanistan has turned out to be NATO’s biggest military mission since its creation in 1949. It has also become the longest war in US history, and has entered the political lexicon as the ‘forever war’ and the ‘endless war’.

Yet US President Biden has said that from later this year, the United States will no longer stay involved in Afghanistan militarily. America will withdraw all its forces by 11 September, 2021, which marks the 20th anniversary of the 9/11 attacks. Meanwhile, NATO has confirmed that its troops are withdrawing from May.

However, President Biden has promised that America’s diplomatic and humanitarian work will continue.

Of course, the departure of the US and NATO forces from Afghanistan does not mean an automatic end to the conflict. In fact, some officials and politicians, both in Afghanistan and abroad, have raised concerns that the full withdrawal of foreign forces in the current circumstances will lead to civil war.

One of the issues that causes a big problem is that the US and NATO withdrawal is set to be completed by a later date than the one originally anticipated. The Taliban feel that the non-completion of the withdrawal of foreign forces by 1 May 2021 is in breach of an earlier agreement that was made during the Trump administration in February 2020.

Another problem is that the Afghan government’s survival is in jeopardy without financial and military assistance by foreign allies.

Furthermore, the government is fractious, because it is made up of figures from many different factions, representing a variety of interests and preferences.

When Soviet forces withdrew from Afghanistan in 1989, the Moscow-backed government in Kabul lasted for three years. But its gradual decline and eventual collapse ushered in a bloody factional war, involving various Afghan groups supported by disparate regional powers.

If issues are not handled with care now, I believe there is a serious danger of a re-run of those scenarios.

If the Afghan government is unable to secure the territory it currently holds, there is a risk of the Taliban taking over large swathes of the country. Government officials say that the Afghan security forces are prepared for an attack, and they are reminding their foreign backers of their pledges of support.

Long awaited intra-Afghan talks started in Doha, Qatar, in September 2020. Unfortunately, so far, these have not made meaningful progress towards a political settlement – or even a ceasefire.

The United States has proposed a United Nations-backed peace conference in Istanbul this spring, with the goal of agreeing a political roadmap for the country.

However, the Istanbul talks have been delayed because of disagreements over their agenda. This will make it increasingly difficult to reach a deal on important issues, such as the future of the Afghan political system.

The Istanbul conference, if it happens, will also be an important opportunity to build a regional and international consensus to resolve the conflict.

I believe that the success of the Afghan peace process – and future peace and stability in Afghanistan – depends on four factors.

Firstly, serious engagement and robust diplomacy by the international community, especially the US. This will provide reassurance of outside support for Afghanistan, after a peace agreement is eventually reached.

Secondly, support of the peace process by all the regional players, who can help persuade the various Afghan actors to reach and implement an agreement.

Thirdly, it is important to address the nature of the Taliban’s regional support base and the group’s willingness for flexibility and concessions.  The Afghan government has repeatedly raised this issue as a concern.

And fourthly, assurances are needed from the Afghan political elite in Kabul that they speak with a united voice and are willing to make the necessary compromises in order to reach a political settlement with the Taliban.

If the chaos in Afghanistan continues, many countries in the region and around the world will be affected by problems, such as a rise in violent extremism, organised crime, drugs and refugees.

The situation therefore requires an international solution. Yet I wonder whether all the regional players are committed to peace in Afghanistan. Some have already started courting various Afghan actors and are taking measures to secure their borders – which suggests they are anticipating further trouble.

Yet we know from past experience that it is the cooperation, influence and pressure of foreigners which makes a crucial difference in matters of war and peace in Afghanistan.

If the Afghan peace process collapses, there are signs that the conflict in the country will not only become more dangerous and deadlier for the Afghans. It will also have negative consequences for the wider region and far beyond.