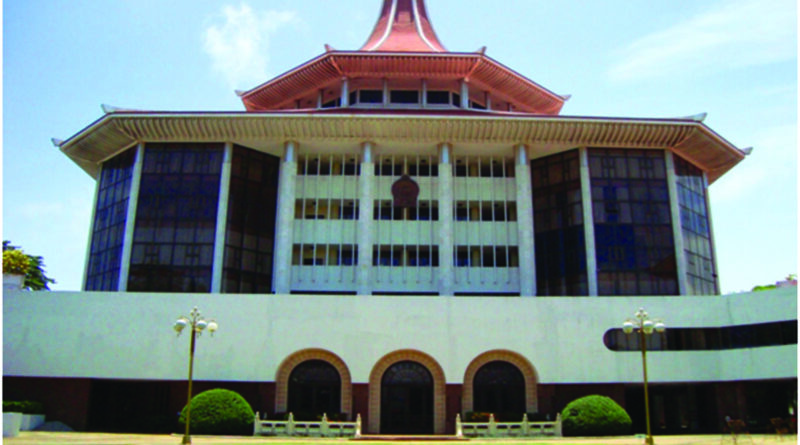 It seemed so surreal. In Sri Lanka’s apex court, some of the country’s senior lawyers appeared on behalf of a battery of petitioners, who were challenging government legislation aimed at setting up a commission to administer the Colombo Port City, some 270 hectares of land reclaimed from the sea by China that would offer a tax haven to foreign investors

The lawyers – representing opposition political parties, civil society organisations (including the Bar Association), labour unions and even Buddhist monks – argued before a five-member bench of the Supreme Court that the proposed legislation was not only discriminatory and unconstitutional, but worse: it would turn the Port City into an enclave of China.

Not too far away from where the learned justices were giving an ear to the legal arguments, which even alleged the reclaimed land is not a part of Sri Lanka, a slanging match was taking place in parliament. Although sittings were briefly interrupted several times, the proceedings stopped short of fisticuffs as the Colombo Port City Commission Bill was here, too, castigated as a sell-out to China.

Such was the atmosphere in the legislature that the Speaker appointed a parliamentary committee to determine who or what sparked the chaos in the chamber.

What made the legal arguments and the uproarious exchanges in parliament so bizarre was the unexpected appearance of a China-bound ship seeking permission to dock in the Chinese-run Hambantota Port in Sri Lanka’s deep-south, claiming a ‘mechanical emergency’.

When Sri Lankan naval officers wanted to board the vessel, they were refused entry. That probably raised the suspicions. The ship’s agents had failed to declare that among the freight was uranium hexafluoride, a radioactive material considered a ‘dangerous cargo’ under Sri Lanka laws and prohibited from being brought into the country without authorisation.

This stringent law, it is said, is because the material could be used to enrich uranium, which could thereafter be used to power nuclear facilities and make nuclear weapons.

What caused immediate concern were memories of an incident back in 2014, during the presidency of the senior Rajapaksa, Mahinda, when the then Japanese prime minister Shinzo Abe visited Sri Lanka. One submarine and one warship docked in Colombo, rousing India’s ire. Acutely conscious of its security, New Delhi was quick to lodge strong diplomatic protests with Colombo. Since then, Chinese subs have not shown their conning towers in Colombo, although it is known in security circles that Chinese subs are in the region and even further west, towards Africa and the Persian/Arab Gulf.

After consultations with the Defence Ministry, the China-bound ship from Rotterdam was ordered to leave – without particularly multiplying the government’s woes, as this arbitrary act of secreting banned dangerous material appeared to buttress the argument that China’s growing footprint in Sri Lanka could become increasingly embarrassing for a government whose foreign policy is said to be ‘neutral’ and ‘non-aligned’.

With the Chinese developer of the project, CHEC Port City of Colombo Ltd, holding 43 per cent of the 269 hectares of reclaimed land on a 99-year lease, China has a good grasp of this planned foreign investment and business project. With a proposed investment of US$ 1.4 billion of its own, China’s influence and power over Sri Lanka is bound to grow.

China already has a 99-year lease on the Hambantota Port, only a few nautical miles from crucial international sea lanes, as Sri Lanka failed to pay back the loan and the previous coalition government of President Maithripala Sirisena-Prime Minister Ranil Wickremesinghe settled it by extending the period of the lease.

Besides the contents of the Bill, what has angered the government’s detractors and the legal fraternity, among others, is the extremely short time given to scrutinise and discuss it. It was presented to parliament on 8 April, the period of Sri Lanka’s national New Year celebrations. With the intervening weekend and three public holidays, public and civil society organisations had a mere two working days to retain lawyers – many of whom were on holiday as the sittings of the Supreme Court was in suspension – and file applications challenging the constitutionality and other legal impediments in the Bill.

This all had to be done within the one-week period now stipulated in the constitution – a period shortened by the current government – which included the holidays.

What irked many was the government ministers claiming that the country is ‘set to achieve unprecedented gain’ from the Port City, which ‘will be transformed as a centre of excellence in doing business’, while depriving the public of the opportunity to scrutinise the proposed legislation with the care it deserves, given its importance.

With Sri Lanka’s economic situation in dire straits, the value of the local rupee dropping sharply against the US dollar and other developing countries facing economic difficulties worsened by the coronavirus pandemic also in search of foreign investment, Sri Lanka may have to offer incentives far in excess of others to attract sizeable investment.

The danger is that going in search of the dollar with open arms and closed eyes and dangling carrots could attract those with illegal money and a penchant for laundering to hover around Colombo’s exclusive zone. Such was the warning of American Ambassador to Sri Lanka, Alaina Tiplitz, when she said ‘nefarious’ actors might try to misuse the China-backed special zone’s easy business rules as a permissive money laundering haven.

Ambassador Tiplitz came under fire from government officials and supporters for raising the red flag. But if there are Sri Lankan entrepreneurs who are prohibited from investing in the Port City, who have foreign currency in local banks and are looking for ways to rid themselves of shady money burning holes in their pockets, they might well find ways of dumping it by devious means in the new ‘haven’, as would others from around the world with ill-gotten money to splurge.

At the time of writing, the Supreme Court is still to announce is determination to the Speaker of Parliament, which is not expected until the end of April. But it is unlikely that the court will rule that the Bill needs to be passed by a two-thirds majority in parliament and at a referendum, or call for any fundamental amendments.

What will be worth watching is the impending visit of China’s Defence Minister, Wei Fenghe, in the closing days of April, and the ‘goodies’ he brings. Weng will be the second high-level visitor from Beijing in the last six months.

Meanwhile, Romesh de Silva, senior counsel for the Secretary to President Gotabaya Rajapaksa, dropped a clanger that should have the government hiding its face in embarrassment. He told the Supreme Court that nothing in the Sri Lankan constitution prohibits a foreign national from being the country’s chief justice or a judge.

The UN Human Rights Council has, in the post-war years, urged Sri Lanka to set up a judicial mechanism with foreign judges and prosecutors to hold accountability hearings for alleged human rights abuses and war crimes.

But Sri Lanka has continually claimed that the constitution does not permit foreign judges to sit in judicial positions. Romesh de Silva’s declaration to the country’s apex court, therefore, negates the defence of governments since 2015 against the UNHRC Resolution 30/1, calling on Sri Lanka to set up judicial mechanisms with foreign judges, prosecutors, defence lawyers and investigators to hear allegations of war crimes and abuses of international humanitarian law, adding an international burden to Sri Lankan shoulders.