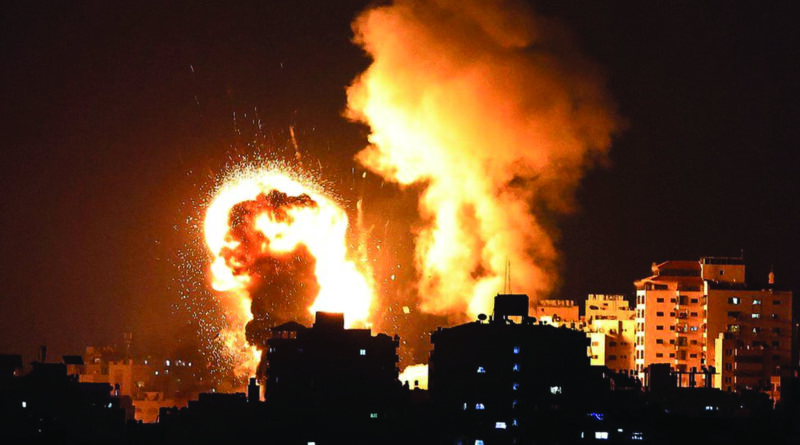 A war in waiting?

Despite the cease-fire that followed ten days of fighting, Ryan Bohl  believes Gaza remains primed for another war

Israel and Gaza militants may have agreed to end their latest flare-up, but without a political solution to the greater Palestinian-Israeli conflict, grassroots violence and miscalculations by factions on both sides could still escalate into another war. On May 20, Israel and Gazan militants approved a cease-fire, ending over a week of fighting after a military escalation erupted on May 10. The latest flare-up saw unrest in the West Bank and Jewish-Arab communities in Israel, as grassroots anger spread beyond the more traditional conflict zone along the Gaza-Israeli border.

But as Gaza and Israel return to an unstable detente, anchored by a mutual desire to avoid an expensive conflict and held together by aid-for-peace arrangement, the underlying social drivers of another war are already in play.

• Significant social unrest broke out in reaction to the Gaza conflict as far-right and ultranationalist Jews and Israeli Arabs clashed and rioted across the country in communities like Lod outside of Tel Aviv, Jerusalem, Haifa, Tiberias, Acre and Beersheba. The fighting had no national leadership and was organised largely on social media.

• The conflict was sparked after Palestinian protesters in the Al-Aqsa Mosque in Jerusalem were forcefully cleared by Israeli police on May 8-9. The police action provoked outrage throughout the Muslim world and was cited by Hamas as the rationale for the rocket and missile attacks on Jerusalem that followed.

The most recent conflict did not substantially reframe relations between Israel and the Palestinians, leaving the drivers of more violence in place. Israeli officials have stated they believe they have restored deterrence with Hamas, which Israel claimed was the primary goal of its recent airstrikes in the Gaza Strip. But beyond that, Israeli officials have given no indication that they want to change the relationship with Hamas to something more stable by engaging in serious peace talks, which have not taken place since 2013.

• The United States, the traditional mediator for Israeli-Palestinian peace talks, has not signalled it will appoint a special envoy for the conflict. This indicates that US President Joe Biden has chosen not to prioritise the decades-long struggle that has defied multiple attempts by his predecessors to bring about peace.

• Other countries like China and Russia have signalled interest in seeing the conflict end, but lack the economic and political leverage over the Israelis and Palestinians necessary to force concessions. The last major breakthrough in the peace process in 1991-93 that produced the Oslo Accords came about in part because the United States was willing to hold up aid to Israel to force talks.

Gazan militants will likely want a period of relative calm to reconstruct damaged buildings and restore aid, though the traditional triggers for another conflict remain. Damage to the Gaza Strip, not yet quantified in official estimates, will likely run into the millions of dollars and require Israel’s acquiescence to allow flows of humanitarian aid and construction materials – pushing Israel and Hamas back into their previous aid-for-peace relationship. Continued attempts by each side to pressure the other to change their behaviour, however, have made this relationship unstable and could create accidental escalation paths.

• From 2017-2021, Hamas would use protests and rocket attacks to pressure Israel into unlocking aid, expanding the economically essential fishing zone for Gazans offshore, and/or loosening border controls for trade. These escalations always carried the risk of accidental war.

• The Gaza government’s media office on May 18 estimated that $244 million of reconstruction aid would be needed to begin rebuilding damage caused by the latest fighting with Israel, though that number is expected to increase.

Without a peace process to defuse social instability, both Israeli far-right and Palestinian grassroots violence could also trigger another conflict. The legacy of the Arab-Jewish riots and the elevated unrest in the West Bank will create new resentments that activists and extremists will seize upon to justify violence. Israel’s far-right movements will likely attempt to provoke more clashes with Palestinians and Arab Israelis in the hopes of both pressuring Arabs into leaving parts of Israel and forcing retaliation by the Arab community that radicalizes Jews. Palestinians activists, shorn of formal political leadership to push back against evictions and new settlements, will also likely attempt to carry out strikes, protests and even riots to try to slow down Israeli expansionism. Those tactics will include the potential of repeating the unrest seen at Al-Aqsa Mosque that triggered the most recent war.

• The Sheikh Jarrah evictions that helped spark the tensions that led to the May 2021 conflict have not been cancelled and could still go forward – raising the risk of another round of unrest, possibly around holy sites in Jerusalem. Even without those evictions, however, other settlements are likely to be expanded in the West Bank and East Jerusalem. Settlers will also continue to try to build illegal outposts in the West Bank when they are unable to get backing from the Israeli state.

For Israel, more clashes between Palestinian and Israeli citizens would risk damaging the country’s relations with the United States. The May 2021 war revealed splits in the US Democratic Party between pro-Palestinian legislators and their more traditionally pro-Israel peers. Progressive Democrats in Congress attempted to block a $735 million arms deal to Israel, with Senator Bernie Sanders and U.S. Representative Alexandria Ocasio Cortez particularly vocal in their criticism of Israeli actions in Gaza. These splits in Washington might be a place where Palestinian activists hope to exploit by creating new confrontations with Israel.