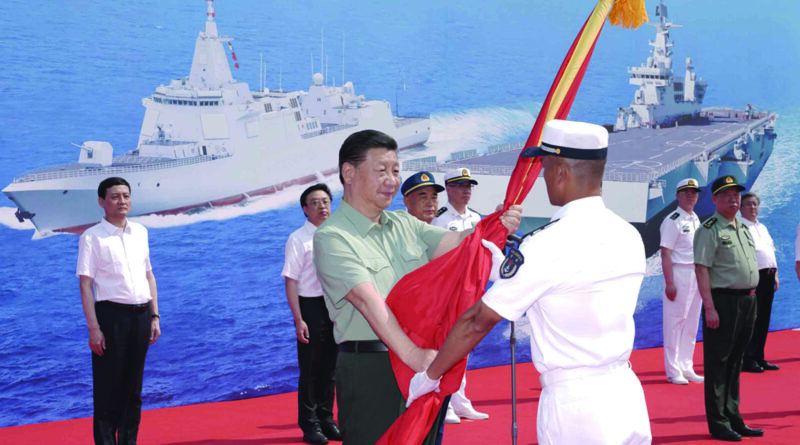 Although the Taiwan Straits and South China Sea have been bristling with warships and overflying military aircraft, the contours of China-US tensions are much wider and multidimensional. The 180-km stretch between the tiny mountainous island of Taiwan and the massive expanse of mainland China is indeed the most dangerous place on Earth right now; but the clash of geostrategic interests between China and the US and its powerful allies has a global signature, spreading out from the Indian Ocean, South and East China Seas to the Pacific region.

A manufacturing superpower with immense economic clout, China’s Cold War rapprochement with the US, forged by America as leverage against the Soviet Union, afforded the backward country – with its large low-wage yet educated workforce – a historic opportunity to grow by leaps and bounds. A strange mix of big ticket post-Mao reforms in opening up the economy to foreign investment and state-directed market economy fuelled a success story for China that most countries would envy.

Taiwan sits at the core of current tensions. Short of declaring independence, the island nation has been refurbishing its defences with sophisticated military hardware supplied by the US which is treaty-bound to defend Taiwan (officially the Republic of China) from Chinese aggression. Taiwan’s recently upgraded F-16V aircraft test-fired for the first time AIM-120 Advanced Medium-Range Air-to-Air Missiles (AMRAAMs) on the island. Taiwan conducts weekly combat readiness exercises, including live-fire training with air-to-air, anti-ship, and air-to-ground weapons, but the US-supplied AMRAAMs had never been test-fired before.

China’s violation of the Taiwanese Air Defence Identification Zone (ADIZ), where any intruding aircraft is asked to identify itself or face interception, has continued for more than a year. A US naval fleet has asserted its presence by insisting on patrolling the South China Sea as its right to freedom of navigation. But it is a very close call and even a small mishap could result in a deadly flashpoint that might escalate into a war.

China has a range of nuclear warhead-tipped ballistic missiles

Over the last 25 years, China has assiduously built up its military capabilities, steadily increasing in sophistication. It has a fleet of 360 naval vessels, more than the US navy, and has been adding newer versions of aircraft to its air force, more than 100 every year. President Xi Jinping commissioned three large warships in April – a nuclear-powered ballistic-missile submarine, a large destroyer with a displacement of 13,000 tonnes, and a helicopter-carrier amphibious assault ship. Chinese state media pointed out the significance of the helicopter-carrier for carrying out amphibious assaults on reefs and islands: ‘These vessels will play important roles in solving questions in places like the island of Taiwan and the South China Sea,’ Song Zhongping, a Chinese military affairs expert and TV commentator, remarked gleefully.

But the major area of concern is Beijing’s growing nuclear arsenal. China has a range of nuclear warhead-tipped ballistic missiles. It has deployed space weapons; has anti-satellite capability and precision short and intermediate-range missiles that can hit Taiwan and US bases in Japan, South Korea and even Guam in the western Pacific Ocean. The country has mobile launcher trucks carrying concealed ballistic missiles. These could survive a first strike because they are always on the move and strike back with devastating effect. While China is no match for the US numerically, two nuclear powers going to war is a worst-case scenario which strategic experts dread.

This nuclear capability, and probable Russian support, makes China dangerously aggressive. In fact Beijing’s policy is to push hard on all fronts to gain an advantageous position, be it the Indo-Ladakh border incursions, Spratly Islands, its dealings with Australia or even the European Union.

China derided the Copenhagen Democracy Summit – held on May 10-11 and attended by Taiwan’s President Tsai Ing-wen, Hong Kong democracy activist Nathan Law and Danish government officials – as a ‘political farce’ and an interference in China’s internal affairs. It has imposed sanctions on the summit’s organiser, the non-profit Alliance for Democracies Foundation, which was founded by ex-NATO Secretary General and former Danish Prime Minister Anders Fogh Rasmussen. The European Union had earlier imposed sanctions on Chinese officials suspected of human rights abuses against Muslim Uyghurs in Xinjiang.

In an opinion article in the state-controlled Global Times, editor-in-chief Hu Xijin blatantly advocated that China should undertake retaliatory long-range strikes on the military and other key facilities in Australia – a member of the US-led Quadrilateral Security Dialogue (QUAD) –  if Canberra tries to interfere in the cross-Straits situation. This statement has been widely criticised in the Australian political circles.

Moreover, the Chinese have surreptitiously been trying to gain a strategic foothold across the globe through their Belt & Road Initiative (BRI). Caught in a BRI debt trap of $1.2 billion, Sri Lanka handed over the Hambantota port to China in 2017 on a 99-year lease. The Colombo Port City, part of the BRI’s ‘Maritime Silk Road’ project, is said to be the single largest private sector development ever in Sr Lanka. Ruling out objections, the Sri Lankan Supreme Court has given the go-ahead to a Chinese-funded tax-free enclave, touted as Sri Lanka’s answer to Dubai and Singapore free-trade zones.

Besides Pakistan’s Gwadar deep-sea port on the Arabian Sea, China established its first military base on Africa’s east coast, in Doraleh, Djibouti. The rebuilt dock can accommodate Chinese aircraft carriers as well as nuclear submarines. Beijing also wants to have a presence farther south along the eastern African coast in Tanzania, and is eyeing Africa’s Atlantic coastline as well, according to US officials.

Reports of China’s involvement in rebuilding a derelict airfield on a remote Pacific island, the Republic of Kiribati, has sent shockwaves through US military circles. The 40 sq. km, ribbon-shaped island of Kanton, part of the archipelago nation of Kiribati, is populated by only 20 people. The atoll’s airstrip was used by the US army  and air force during World War II, and later in the 1960s for space and missile tracking.

China and Kiribati re-established ties two years ago and signed cooperation agreements on infrastructure investment as well as trade and cultural exchanges. Located between New Zealand and North America, this group of 32 coral atolls and one island spread over a vast area not only provides China with a foothold in a strategic location, but also access to Kiribati’s extensive exclusive economic zone, which covers more than 3.5 million sq. km and includes some of the most productive fishing grounds in the Pacific.

The existing runway, once modernised, could be used for fighter deployment, and even extended to accommodate maritime patrol aircraft and bombers. The site is ideal for the installation of surface-to-air missiles and shore-based anti-ship cruise missiles, according to experts.

The Australian Strategic Policy Institute (ASPI), a Canberra-based think tank, speculated in an article published last September that Beijing was likely to reclaim the seabed and expand island installations in Kiribati as well as fortify them, as it has done in the South China Sea.

A Pacific island nation which has bitter experience of China’s bullying is Palau, an archipelago of over 300 islands in western Pacific. However, Palau’s President Surangel Whipps has bravely hit back by inviting the Americans to set up strategic ports, bases and installations in retaliation to an overt Chinese bid to destabilise the tiny nation’s tourism-dependent economy.

Palau’s 21,000 people had, until a few years ago, welcomed with open arms hordes of Chinese tourists to the tropical islands, including uninhabited forest-tufted rock islands. Chinese tourists peaked at 87,000 during 2015, about half of all tourist arrivals. But in 2017, they stopped coming after Palau refused to revoke its diplomatic recognition of Taiwan.

‘That’s just an example of how China’s spending is a kind of bait,’ Whipps told Taiwanese reporters in March this year. ‘What you’re doing is illegal, recognising Taiwan is illegal. You need to stop it,’ Chinese President Xi’s officials told him point bank. Among 15 other countries recognising Taiwan, the only other Pacific islands to do so are the Marshall Islands, Nauru and Tuvalu. The US army has already started using Palau to train troops and for military exercises.

An intolerant and expansionist China therefore poses the greatest threat to peace and stability ever perceived. Unlike the US-Soviet arms limitation treaties and crisis management systems that have been in place, China is outside the arms control ambit. There is no formal mechanism of crisis management between the US and China. Given its dictatorial regime, controlled by the Chinese Communist Party and an autocratic virtual present-for-life Xi Jinping, who is not accountable to popular mandate, the future is fraught with uncertainty.