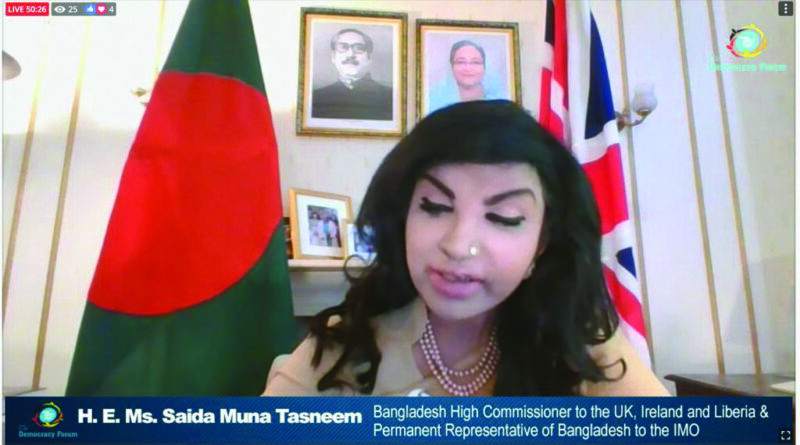 Country at the crossroads

At a Democracy Forum debate marking 50 years since the creation of Bangladesh, panellists discussed both the nation’s remarkable achievements and the challenges that lie ahead

As Bangladesh celebrates half a century of nationhood, this South Asian country of more than 160 million people stands praised for the strides it has made in development, entrepreneurialism and counter-terrorism. The country has also gone through dark periods of military dictatorship while now, with record growth, some questions are being asked about its human rights record and commitment to democracy.

All these issues were raised and discussed at a May 19 Democracy Forum debate, ‘Bangladesh, Then and Now: From Liberation War to Nucleus of South Asia’, at which the Bangladeshi High Commissioner to London, panellists and audience members gave their views on Bangladesh’s place in South Asia and the wider world.

Would it become a proxy state, torn this way and that in the struggle for influence between regional and global powers? How does it counter extremist Islam? How much is it a leader in tackling climate change, where millions of its citizens literally live on the front line?

The Democracy Forum President Lord Bruce lay out the canvas by describing Bangladesh as a state which emerged from the depths of a horrendous bloody conflict, but established a constitution based on a clear and unambiguous set of principles.

In that respect, Lord Bruce hoped that the vision of the founding leader Sheikh Mujibur Rahman – affectionately known as Bangabandhu (friend of Bengal) – would stand ‘undiminished as a moral and intellectual nucleus for South Asia’.

The Bangladesh High Commissioner to London H. E. Saida Muna Tasneem called on the world to recognise her country’s embrace of ‘secular, democratic and pluralistic values’.

Within the South Asia region, Bangladesh was adopting a practical policy and there was no question of it becoming a proxy with any of the more powerful countries around it. ‘We maintain good relations with India, and we have reached out to China,’ she explained. ‘We have good relations with Russia.  The only problem that we have is with regard to Myanmar with the Rohingya crisis.’

Ms Tasneem spoke, too, about a zero-tolerance policy on extremism. ‘There will be no place for religion-based politics in Bangladesh, no place for radicalisation, or extremism,’ she said, pointing out that the religious extremism of today was not substantively different from that of 1971, when the nation came into being.

Speaking from Dhaka, Professor Rehman Sobhan, chair of the Centre of Policy Dialogue, described how he had been a young activist in the liberation movement. ‘We had to go construct a state, and to revive an economy,’ he recalled. ‘This whole process was interrupted at a very crucial stage by the assassination of Bangabandhu and his family [in 1975].’

Professor Sobhan was pleasantly surprised by the unleashing of the entrepreneurial spirit of the people of Bangladesh. ‘At the time of liberation, we had no entrepreneurial class, the dynamic was really provided by a state… Since then, we have quadrupled agricultural production. We have now got a thriving non- agricultural economy which has made us the second largest exporting country after China.’

He added, however, that institutions were becoming politicised, leading to a lack of accountability that was contributing toward corruption. ‘All this has an impact on our development because it raises the cost of doing business,’ he argued. ‘We will have to address some of these challenges.’

Dr David Lewis, a specialist in development from the London School of Economics, continued the theme by describing Bangladesh as being at a ‘risky crossroads’.

On the one hand, it was increasingly setting the pace in South Asia with female literacy levels now higher than India and far better than Pakistan. Life expectancy had gone from 46 years in 1971 to 72 now. Bangladesh has also taken a leading global role over climate change and would be a key player in the United Nations COP26 conference in Britain later this year.

On the other hand, however, its impressive record was threatened by concerns around democracy and human rights. ‘Most local civil society institutions are strongly co-opted by the ruling party,’ he said. ‘The government has a patchy record of protecting liberal voices. In 2020, the Asia Human Rights Commission reported that 138 people have been arrested for criticising official corruption or criticising the Prime Minister.’

High Commissioner Tasneem responded by reaffirming her government’s commitment to human rights, adding, ‘If you look at human rights in any developing country, no-one is perfect.’

Journalist and commentator Syed Badrul Ahsan reminded the audience and fellow panellists about the dark periods in Bangladesh’s recent history, which he described as the counter-revolution, when democracy was held back.

‘A civil military bureaucratic complex took over the country,’ he said, pointing out that those who carried out the 1975 assassination of Sheikh Mujib went on to plum jobs as diplomats in embassies abroad.

‘When Bangladesh came into existence the idea was that there will always be a democracy and not to be afraid of elections,’ he said. ‘But we had military rulers who imposed martial law.’

.Speaking from Delhi, veteran politician, author and journalist M.J. Akbar focused on the theme of Bangladesh being the nucleus of South Asia. He first dismissed the argument that India had neo-colonial intentions toward Bangladesh and added, ‘I fully understand the nation’s desire to be a nucleus. But we have to think of it not as an atom, but as a molecule in which cooperation is the basis of the way forward. If we are committed to our shared principles, then the way forward actually becomes far easier.’

Summing up, Chair of the Democracy Forum, Barry Gardiner, MP, said the debate had been enlightening and had not shirked from addressing emerging problems. He emphasised how speakers had balanced challenges around human rights and corruption, which he warned paved the way for extremism, with Bangladesh’s ‘great achievements in education, health, climate action and the micro-credit economy, to name a few’.

‘I cannot recall being more enlightened by a Democracy Forum debate,’ Gardiner concluded.