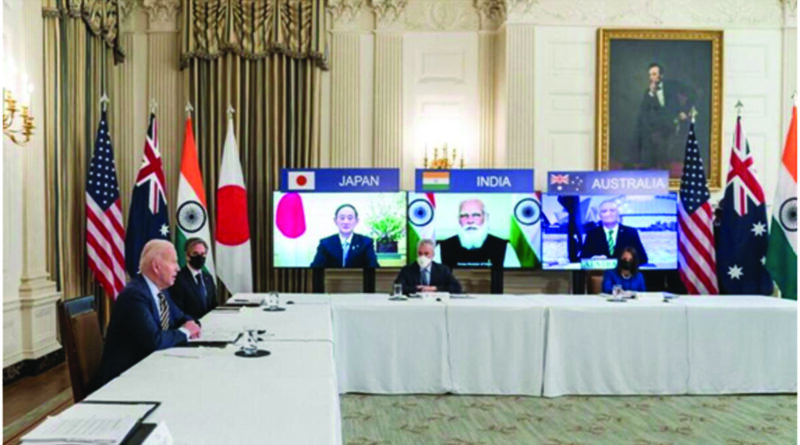 Following a momentous summit between the leaders of the Quad nations,  Amit Agnihotri  reflects on the chances of the grouping expanding, or even the creation of an Asian NATO

The historic meeting of Quad leaders in March this year may have increased the chances of the US-led grouping developing into an Asian NATO to contain a rising and expansionist China, but such a military alliance appears unlikely at present.

While the prospect of a Quadrilateral Security Dialogue, popularly known as the Quad, had been discussed since 2005, it was not until 2020 that it took an informal shape.

Over the past years, the Asian Dragon’s growing assertion in the Indo-Pacific region, representing the vast expanse spread across the Indian Ocean and the Pacific Ocean, which facilitates a major volume of global trade, has upset not only the US but the other Quad members as well.

The United States was the first to articulate, in 2020, the need for an Indo-Pacific defence alliance along the lines of the North Atlantic Treaty Organisation (NATO) to counter China.

One common factor behind the formation of the Quad is that China has had a border or trade-related clash with all four member countries. It is locked in a race for global supremacy with the US, while its bitter border stand-off with India in the Himalayas last year created deep distrust between the two neighbours. Beijing imposed high trade tariffs against Australia in retaliation after Canberra demanded a global probe into the origin of the coronavirus, which wrecked world economies and provoked former US President Donald Trump to dub it the ‘Chinese virus’, as it was first noticed in Wuhan. China also regularly threatens Japan over Senkaku Islands in the East China Sea.

The Quad’s defence spending adds up to $876 billion

Understandably, the US stressed the need to curb Communist China’s global ‘exploitation, coercion and corruption’ as it aggressively pushed the Quad.

Fearing a challenge to its supremacy, the Asian Dragon accused the US of trying to revive the US-Soviet Union Cold War mentality and convert the grouping into a larger military alliance against China.

Before the Quad leaders met, senior officials of the four countries interacted with each other regularly to prepare the ground for the summit.

Their focus throughout had been on maritime security, among other things, but a major milestone for the grouping was Australia joining the Malabar naval exercises (involving the US, Japan and India) in the Indian Ocean for the first time.

Yet even as the Quad members converge on the need to contain an expansionist China, they are moving ahead cautiously.

India has denied the possibility of an Asian NATO though it actively participated in Quad meetings, saying such regional groups, focused on specific objectives, were part of its global diplomacy. New Delhi cited its trilateral pact with France and Australia as an example to support its view and alleged that China was playing mind games by casting a shadow of doubt over the intent of the Quad.

Although India restrained itself from any US mediation, despite grave provocations from China in Ladakh, the South Asian giant has justified the Quad by dubbing it a partnership of democracies which wants to keep the Indo-Pacific free and rules-based.

The firming up of the Quad has unnerved China, which initially downplayed the grouping but has started targeting it of late. For example, China’s threat to Bangladesh, warning Dhaka against joining the Quad, showed the US-led grouping has rattled the Asian Dragon.

However, there are some issues which need to be sorted out before an Indo-Pacific defence alliance can become a reality.

Lack of trust among the Asian nations might prove to be a roadblock towards any military alliance against China. Beijing has close economic ties with many of these countries, which may not be prepared to give up that advantage.

Added to this is the nuisance value of a nuclear-armed Pakistan, which sits happily in China’s lap but engages with the US as well.

Proponents of an Asian NATO counter this view by pointing out that after World War II, there was lack of trust between the West European nations as well, but they still went ahead and joined the defence alliance to counter the threat from the Soviet Union.

The West European nations first signed the 1948 Brussels Treaty and later formed the Western European Defence Organisation. This latter was found wanting in its objective and finally led to NATO in 1949.

While the trigger for NATO was the 1948 Berlin blockade by the Soviet Union, the world is multi-polar after seven decades. Yet it feels the heat of a rising China.

There has been no mega security crisis involving China in recent times, though the Asian Dragon’s aggression continues.

In January this year, the US rejected China’s claims in the South China Sea and sent aircraft carrier USS Theodore Roosevelt to warn Beijing after it flew fighter jets over Taiwan.

China often flexes its muscles. It is the world’s second largest military spender, at $261 billion annually, after the US at $732 billion, and has a significantly bigger defence budget than India ($71 billion), Japan ($47 billion) and Australia ($25 billion) put together.

However, the Quad’s defence spending adds up to $876 billion, far more than that of the Asian Dragon.

This has worried Beijing, along with the fact that US intelligence has identified China as the country’s number one enemy. This means the cold war between the two countries is only going to get worse.

Against such a backdrop, the chances of deeper cooperation between the Quad members, both economic and security related, and a possible expansion of the grouping appear to be brighter than a formal NATO-style Asian defence alliance.

The Quad has achieved its initial objective of warning China. Over the coming months and years, greater coordination between the grouping, while keeping the option of a military alliance open, seems to be the best approach to keep the Asian Dragon under check.