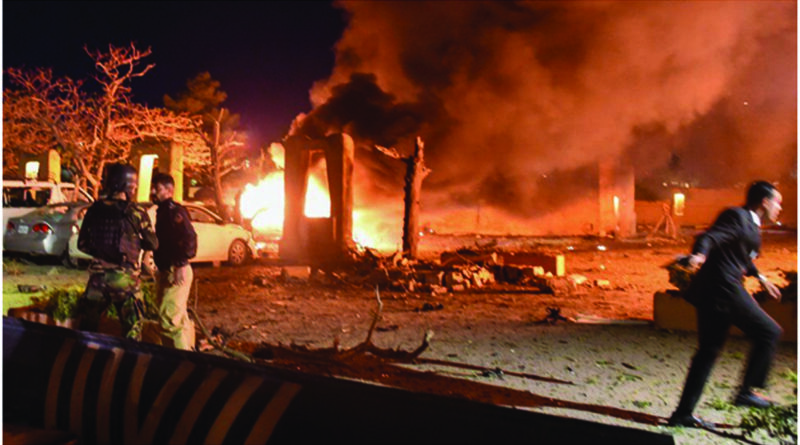 After a period of decline, the Pakistan Taliban is regaining strength, and purpose. Sudha Ramachandran assesses the widening focus of its hostility

The Tehreek-e-Taliban Pakistan (TTP) is back with a vengeance.

On April 21, it carried out a suicide bombing in the parking lot of the Serena Hotel in Quetta, the capital of Pakistan’s Balochistan province. The attack left five people dead and around 12 others injured. The Chinese Ambassador to Pakistan, Nong Rong, and other Chinese officials were staying in the hotel at the time, although they were not actually present when the bomber struck.

Since 2007, when it was formed, the TTP’s main target has been the Pakistan state, as the group hopes to oust the government and thereby establish sharia law in Pakistan.

However, many believe that the Serena Hotel attack was directed at the Chinese delegation, with a view to undermining the China-Pakistan Economic Corridor (CPEC). By targeting Chinese nationals, officials and CPEC projects, the TTP aims to weaken the Pakistani economy and thus the Pakistani state.

A network of anti-Pakistan Pashtun militia who inhabit the tribal areas along the Afghanistan-Pakistan border, the TTP emerged in response to the Pakistan army’s assault on the Lal Masjid (Red Mosque) in Islamabad in July 2007, in which hundreds of radical clerics and madrassa students were killed. Islamists were enraged by the state’s action.

On December 14 that same year, around 40 militant leaders, who commanded some 40,000 fighters, came together in South Waziristan. Pledging revenge against the military for its assault on the Lal Masjid, these leaders founded the TTP.

Differences erupted within the group over relations with al-Qaeda

Hitherto, most Pakistan-based Islamist outfits had directed their violence against Indian, Afghan and Iranian targets. Sunni radicals also targeted Shias, Sufis and Ahmadiyyas. But in the wake of the military assault on the Lal Masjid, Sunni militia rallied behind the TTP banner to wage ‘holy war’ against the Pakistani state.

Between 2007 and 2014, the TTP carried out attacks on a US military base in Afghanistan, the Pakistani naval base and the Jinnah International Airport in Karachi. It carried out countless other attacks on Pakistan military and police installations, convoys and personnel, and is said to have been behind the 2008 assassination of former prime minister and Pakistan People’s Party chief Benazir Bhutto, an allegation the group has always denied. The TTP also slaughtered thousands of Pakistani civilians, including schoolchildren, tribal chiefs, religious and sectarian minorities. Among its most horrific attacks was the one on the Army Public School in Peshawar in December 2014, where 132 schoolchildren and nine teachers were gunned down.

The TTP’s successes on the terror front provoked a strong response. The United States launched drone strikes that were immensely successful in eliminating several leaders, including TTP founder-chief Baitullah Mehsud in 2009, Hakimullah Mehsud in 2013, and Mullah Fazlullah in 2018.

Meanwhile, the Pakistan military launched a series of offensives on TTP hideouts in North and South Waziristan, which broke the back of the TTP and scattered its fighters. As a result, many TTP fighters shifted base to Afghanistan.

Internal conflicts, too, played an important role in the TTP’s decline. Differences erupted within the group over relations with al-Qaeda and the question of engaging in talks with the Pakistan government. These led to bitter infighting. Matters came to a head after Hakimullah’s death in late 2013. The appointment of Mullah Fazlullah, a non-Mehsud, as Hakimullah’s successor did not go down well with the powerful Mehsud clan. The latter broke away to form the Tehrik Taliban South Waziristan. Other factions also disaffiliated from the group to form outfits such as the Ahrar-ul Hind, Jamaat-ul Ahrar and Hizb-ul Ahrar, and several TTP fighters defected to the Islamic State Khorasan. Factional fighting seriously weakened the TTP.

It was only when Noor Wali Mehsud assumed leadership of the TTP, following Fazlullah’s death in 2018, that the group started on its road to recovery. Leaders of factions that had broken away earlier pledged allegiance to Noor Wali Mehsud. These groups returned to the TTP fold and fratricidal fighting reduced.

Today, TTP fighters who were operating from bases in Afghanistan have returned to tribal areas in Pakistan. The militants’ capacity has grown, as is evident from the recent attack at the Serena Hotel.

As this hotel is known to host officials and diplomats, and is located between the Iranian consulate and the Balochistan Provincial Assembly building, its security is very tight. The fact that the suicide bomber was able to breach this security indicates that the TTP has successfully revived its operational capacity beyond Khyber Pakhtunkhwa.

The revival of the TTP should worry both Islamabad and China. Although the Pakistani government has sought to downplay the likelihood of China being the target of the Serena Hotel attack, it is hard to ignore the fact that the explosion missed the Chinese ambassador by a mere ten minutes.

China’s oppression of the Muslim Uyghurs is an important reason for the TTP’s targeting of Chinese projects and personnel. In 2012, the group killed a Chinese tourist in Peshawar, justifying the killing as ‘revenge’ for Chinese treatment of Muslims in Xinjiang province. Anti-Chinese content is said to be growing in TTP propaganda, which could be a sign that Chinese interests will emerge as important focuses of TTP violence in the coming months.

According to a report by the Pakistan Institute for Peace Studies, the TTP and its affiliates carried out 67 terror attacks in 2020, which was 46 per cent of all such attacks in Pakistan last year. The group was therefore the main perpetrator of terrorist violence in the country last year.

A reinvigorated TTP can be expected to unleash more violence in the coming months and, with ever more ambitious targets, it will be a force to be reckoned with.