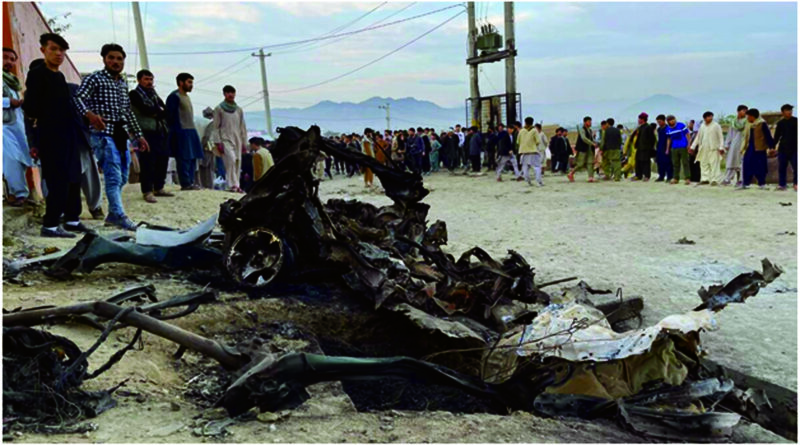 Afghan women have reason to fear the return of Taliban rule, and a subsequent volte-face on social gains made in recent years. Yvonne Gill reports

May 8: a quiet Ramazan Saturday afternoon in the Shia Hazara-dominated Dasht-e-Barchi locality of western Kabul. Their classes over, female students had begun emerging from the Sayed-ul-Shuhada High School.

Suddenly, an explosives-laden car was detonated at the school’s entrance. Deafened and shaken by the blast, the terrified girls found themselves in the midst of smoke, debris and mutilated bodies, with several wounded and unable to move. Two more blasts followed. As many as 63 people – mostly schoolgirls – were killed and 150 injured.

The school has over 7,000 students studying in two shifts: boys in the morning and the remaining 2,000 girls in the afternoon. ‘All are innocent children… All were martyred mercilessly. One didn’t have legs, another didn’t have a head,’ a shell-shocked Abdul Latif, who lives in the locality, told TOLOnews, Afghanistan’s 24-hours news television network.

Although the Taliban denied any involvement in the bombings, reports clearly indicate that the mullahs are at their blood-letting game again. Even as American troops pull out and Ashraf Ghani Ahmadzai’s enfeebled, faction-ridden administration tries to maintain some semblance of law and order, the jihadi militia is going hammer and tongs against civil and security establishments across Afghanistan, leaving a trail of death and destruction in its wake. At least 44 civilians and 139 government troops were killed in Afghanistan in the first week of May, the highest weekly toll since October last year.

Modern women, in particular, are a target for the Taliban mullahs and other fanatical factions. In March, in two separate attacks on the same day in Jalalabad, three Afghan women were killed on their way home from their jobs at Enikass Radio and TV. The victims – Mursal Wahidi, 25, Sadia Sadat, 20, and Shahnaz Raofi, 20 – did voice-overs for the station’s foreign programmes. A fourth young woman was wounded and hospitalised. The Islamic State claimed responsibility for the attacks.

These were not isolated incidents. In January this year, unidentified gunmen killed two female Supreme Court judges and wounded another while they were on their way to the court in Kabul; and last December, Malalai Maiwand, 26, a television and radio presenter with Enikass, was gunned down. Maiwand’s mother, an education activist, was herself killed ten years ago by ‘unknown gunmen’ – a euphemism for Islamic fanatics.

Such assassinations and attempted assassinations of female politicians, judges, journalists, women’s rights activists, government employees and others have dramatically increased since the US-Taliban negotiations began in September 2020. While the Taliban denies its involvement, IS and other radical jihadi elements, vying with one another to grab chunks of Afghanistan after the exit of the US and its allies, claim responsibility.

Various violent jihadi factions threaten to take away whatever freedoms and dignity Afghan women have gained over the last 10 or 15 years, while the Taliban insists on the re-establishment of its dreaded Islamic Emirate in Afghanistan. The Doha Accords bind the Taliban to ensure al-Qaeda and other foreign groups such as Islamic State do not operate in areas under its control, but it has done nothing to curb these elements. In fact, al-Qaeda and IS are said to be active in at least 21 of Afghanistan’s 34 provinces.

Despite some differences, the bigoted religious fanatics largely converge on the agenda of establishing what they describe as a ‘pure’ Islamic system. Women and minorities will invariably be the first victims of such an endeavour. The Islamists make it clear women have no role in running society. Women going out to work or studying in schools and colleges have no justification from an Islamic point of view, ‘because Afghanistan is at war. Infidels have invaded our country, so we should do jihad against them. When the Taliban captures entire Afghanistan, then it will be possible to create a system in which women in hijab could study and work. Their honour will be preserved by remaining in hijab’, a Human Rights Watch report quotes a Taliban local commander as saying.

The social status of many Afghan women living in towns and cities has risen. They serve as members of Parliament, ministers, judges, high government officials and employees, and as officers in the Afghan National Army and security forces.

As Western forces withdraw from Afghanistan, different international players are keen to fill the void. These include China, Russia, Iran, Pakistan and India.

However, India’s stance has primarily focused more on development and aid than getting involved in the Afghan imbroglio.

Following the 9/11 attacks by al-Qaeda in 2001, the US is estimated to have squandered a mindboggling $1.5 trillion on the Afghan War. Now, after two decades it is back to square one. India, on the other hand, has spent $3 billion on development in the war-stricken country, making a much bigger and more positive impact. Indian developmental projects will be remembered as landmarks in the history of modern Afghanistan.

Even as uncertainly reigned supreme after the US-Taliban deal, India and Afghanistan signed a $236 million agreement on February 9 for the construction of the Shahtoot Dam. This project will not only provide safe drinking water for around 2.2 million people, it will also greatly expand the irrigation network to Afghanistan’s water-scarce regions. President Ashraf Ghani thanked Indian Prime Minister Narendra Modi for this ‘gift of life’ to his country.

India-Afghan cooperation has been wide-ranging. It has included training Afghan civil servants, diplomats and police; rebuilding air links; investment aid in agricultural developments; building infrastructure for the health and education sectors; and cultural and educational exchange programmes. Several Indian public and private sector companies are involved in development work, despite the risks of extreme work conditions.

A shining example of this cooperation is the new Parliament building built by India on 100 acres of land next to historical landmarks such as Amanullah Khan’s Palace and the Queen’s Palace in the famous Darulaman section of Kabul. The main attraction of the building, designed and executed by India’s Central Public Works Department, is a bronze dome 32 metres in diameter and 17.15 metres high, the largest dome in Asia. A water body with nine cascading fountains adorns the entrance, while a 20-foot fountain made of green marble, imported from the Indian city of Udaipur, has been installed inside Parliament.

Many women serve as pilots in the Afghan Air Force, while Khatool Mohammadzai, a veteran paratrooper, has reached the position of Brigadier General in the Afghan Army. Women are making their presence felt in different walks of life, from business to sport and the arts. One profession they dominate is the health services, with women comprising more than 50 per cent of doctors, nurses and other medical professionals in Afghanistan.

What a contrast, it seems, to the dark days of Taliban rule from 1996 to 2001, when women were confined to hearth and home. They had limited or no access to education, employment and health services, and were required to be fully veiled and accompanied by male escort in public.

But wait. This is not the complete picture. In predominantly rural Afghanistan, many women still suffer under a grim mediaeval patriarchy and mullah raj. They work on family farmlands but have no ownership rights. Abuse, domestic violence and summary divorce and desertion by polygamous husbands are common.

More than a third of Afghanistan is today under Taliban control. Even other parts have different Islamic fundamentalist factions, which enforce feudal Islamic laws with brute force, including torture and killings. The Taliban does not allow adolescent girls to go to school, while a strict burka code is enforced on women who go out. The number of female teachers, doctors and nurses has steadily declined in many areas as education for women is banned.

When the Taliban were in power in the late 1990s, the Ministry of Enforcement of Virtue and Suppression of Vice, with its moral police, was the most powerful arm of a regime that ruthlessly enforced ultra-Islamic decrees concerning moral behaviour and punished violators. With the Taliban regaining control of vast patches of the country over the last several years, ‘vice and virtue’ mullah police have reappeared to enforce Islamic social norms and dress codes, according to reports.

Taliban courts at local, district and provincial levels have also been active in dispensing what they call Islamic justice. The Taliban has set up a tamiz, or appeals court, akin to a constitutional court that does not re-examine the facts of a case but only interprets the relevant law, says the Human Rights Watch report.

Often, women are sentenced to flogging or more severe penalties for committing adultery or having ‘immoral relationships’ with men. The Pajhwok Afghan News reported the sad story of a woman fleeing domestic violence, who sought the assistance of another man to file an appeal for justice at the Taliban district court. Both the man and woman were promptly arrested and, after a summary trial, the Islamic court sentenced the woman to death. The sentence was carried out by her father and brother – the very perpetrators of the violence she had tried to escape – who shot her dead. The man whom she had asked for help received 40 lashes.

Following the deal with the Americans, the Taliban is on the offensive and is gaining ground. The fall of Nerkh district, only 30 kilometres from Kabul, to Taliban forces in May has sent shockwaves through the capital. While the government says the Afghan Army has made a ‘tactical retreat’, losing an entire district is a big issue, says Karim Atal, a member of the Afghan Parliament. ‘Even when a check-post falls, then we have a very serious situation over the following two or three months. It will be very difficult to compensate for the loss of a district,’ Atal adds.

On the first day of the Eid-ul-Fitr three-day ‘ceasefire’ between the Taliban and Afghan forces, explosions in Kandahar and Kunduz provinces killed nine people and injured 17. Another 12 people were killed during Friday prayers at a mosque in Shakar Dara district of Kabul.

The horror stories are unending as Taliban hordes rejoice at the American pull-out, and women will be among the hardest hit, though far from only, casualties.