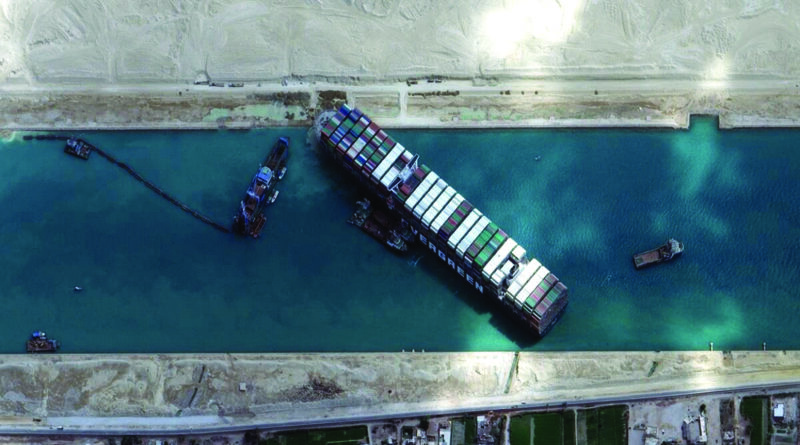 The March blocking of the Suez Canal by a vast container ship caused major disruption. With 12 per cent of all international cargo passing through Suez daily, Nicholas Nugent considers how the canal and other ‘pinch points’ affect trade between Asia and Europe

After Egypt and Israel fought each other in the Six Day War of 1967, the Suez Canal remained closed for eight years, trapping 14 ships throughout that time.

The Egyptian authorities were relieved the latest closure – caused by the huge container ship Ever Given running aground – lasted only the length of that war: six days. Yet shipping volumes now are so much greater – around US$5bn worth of oil, gas, minerals and container cargo heads in each direction every day – that US$57bn worth was delayed by even this short closure.

Qatar, for example, sends five tankers of liquefied natural gas (LNG) through the canal each week – ten when you include the empty return voyages. And consider that one container-carrying vessel can hold well over 20,000 20-foot equivalent units (TEUs). If containers on the Ever Given were laid end to end they would stretch 122 km. Around 19,500 vessels transit the canal every year.

While most delayed vessels reached their destinations only a few days late, though with extra fuel costs to their journeys, the Ever Given, with its 20,124 containers, has been held mid-canal in the Great Bitter Lake while insurers negotiate a penalty charge levied by Egypt for dislodging the vessel. It is said to be demanding between $600mn and $916mn.

Since 2015, Egypt has widened or ‘double-streamed’ part of the canal to cater for ever larger container vessels and tankers, allowing a two-way flow of vessels. But this did not extend to the southern section where the Ever Given was wedged, blocking transit in both directions. (The authorities have now started work on widening part of the southern section.)

The Suez Canal is pivotal to trade between Asia and Europe for just about everything, except vaccines and some foodstuffs, which are moved by air. But there are alternatives, besides the longer Cape of Good Hope route.

Russia has used the Ever Given incident to promote its Northern Sea Route – once known as the North-East Passage – which links Norway to the Bering Sea across the top of Russia. This Arctic Circle passageway has traditionally been open for only five months of the year, but that is changing with the ice cap melting and Russia deploying heavy-duty icebreakers.

President Putin has set a target to raise the volume of goods transported annually by this route from 30 million to 80 million tons. (The Suez Canal carries 90 million tons of trade every month.) For now, the main use will be to export LNG from Russia’s new gas field on the Yamal Peninsula in the Arctic Sea.

Meanwhile, China has started sending some of its manufactured goods to Europe by train. For example, Volvo, a company now owned by China, makes vehicles in Chengdu, southern China. Cars bound for Europe are sent each week by train to Rotterdam – incidentally, the port for which the Ever Given was bound. It costs more to move goods by train than by sea, but it is also quicker.

With so much manufacturing now based on the ‘just-in-time’ principle that components arrive as they are needed, journey time becomes as important as cost.

The Ever Given episode demonstrates how dependent the world has become on such transit routes and how they become ‘pinch points’ when things go wrong.

For example, six weeks after the Suez blockage, a cyber-attack closed America’s Colonial Pipeline, which delivers 45 per cent of the East Coast’s fuel supplies. Petrol prices, which rose during the Suez hiatus, shot up again as US gas stations ran dry. That disruption, too, was settled after a few days, allegedly following a hefty ransom payment to the attackers.

Another ‘pinch point’ became apparent when car manufacturers ran short of vital electronic ‘chips’ needed for vehicle instrumentation. Several European and Japanese manufacturers were forced to close temporarily when their supply chains failed. Analysts say this had nothing to do with the Suez crisis but that companies had failed to take account of the enhanced demand for chips used in smartphones and tablets during the COVID-19 pandemic.

In the 17th century, European powers learned the power of monopoly of supply when they competed for the scarce commodities of the time, such as cloves and nutmeg, which could be sourced only from a small number of Spice Islands, now part of Indonesia.

Now, in a curious 21st century parallel, another Asian island is holding western manufacturers ransom as it responds to the enhanced demand for chips, or semi-conductors – albeit unwittingly. The island is Taiwan, not strictly a recognised nation state since China claims it as a province.

TSMC, the Taiwan Semi-conductor Manufacturing Company, supplies 84 per cent of global demand for the advanced semi-conductors used in smartphones, laptops, car batteries, cordless tools and vehicles. The world’s ninth most valuable company, with market capitalisation of $574bn, is struggling to meet this heightened demand.

TSMC’s unsurpassed expertise is in nanotechnology – squeezing upwards of 170 million transistors onto one square millimetre of silicon. Semi-conductors are a key component of modern life. Among companies totally dependent on chips from TSMC are Apple of the US and Alibaba of China. Understandably, the world fears a forcible takeover of Taiwan by China’s armed forces, lest it cut the supply of semi-conductors.

Yet another ‘pinch point’ in modern supply chains is controlled by China: that of ‘rare earth elements’, which are neither particularly rare nor are they earths. These little-known metals are essential ingredients of the same tools of modern life: smartphones and vehicle batteries, as well as wind turbines, solar panels and fibreoptic cables.

Their rarity value comes from the fact that Chinese mines currently produce 70 per cent of global output, though rare earths are found on all continents. When processing of other countries’ output is included, around 90 per cent of global supplies come from China. Former US President Donald Trump offered to buy Greenland to access its minerals, while his successor Jo Biden, recognising the vulnerability of America’s supply chains, has ordered an urgent security review. Manufacturing economies around the world are heavily dependent on Taiwan and China.

As container transport benefits from what has been called ‘gargantuanisation’, at the opposite end of the chain, manufacturing benefits from the marvels of miniaturisation or nanotechnology. The smaller you make your semi-conductors, the greater becomes global demand. But no matter the size, today’s elaborate supply chains are balanced by different kinds of ‘pinch points’ or bottlenecks.

Nicholas Nugent reports on Asian trade issues, and has transited through the Suez Canal