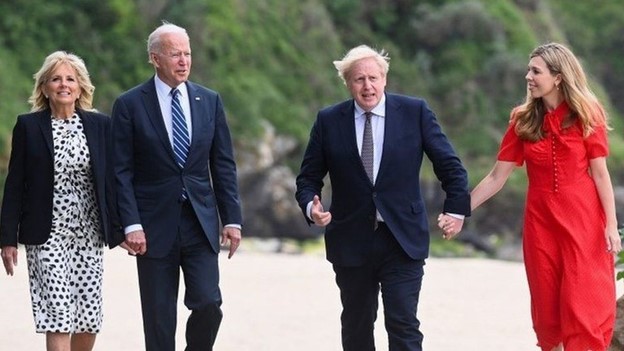 Great promises of the G7

Joe Biden’s first trip to Europe as president of the United States had many Asian themes and helped to reinforce America’s friendships and allegiances. Duncan Bartlett reports

It was inevitable that when US President Joe Biden travelled to Cornwall to take part in the G7 summit in Carbis Bay, the cameras would focus on his meetings with the host, British Prime Minister Boris Johnson, his new wife Carrie Johnson, and their one-year-old son Wilfred.

Young Wilfred stole the show at a beach barbecue for the world leaders and their wives, rivalling the British Royal Family – including the Queen – for press coverage.

Among those who received the charm treatment from the youngster were the Japanese Prime Minister Yoshihide Suga and his wife, and the president of South Korea, Moon Jae-in, and his spouse. While Japan is a G7 member, South Korea was attending the event with observer status.

The seaside location provided the perfect setting for a friendly, diplomatic mood. As he grinned at the Asian leaders, Wilfred would have been blissfully unaware of the tension between their nations.

The Japanese and Korean leaders even managed to hold a brief, cordial conversation, saying they were pleased to see each other. However, there was no trilateral meeting between the US, South Korea and Japan.

South Korea, as an observer country, was not invited to contribute to the G7’s final communique. Its foreign ministry is still committed to developing closer relations with China, and President Xi Jinping will be invited to visit Seoul as soon as the Covid situation allows.

Like South Korea, India was invited to the G7 with the status of an observer nation. However, the Johnson family did not get to meet the Indian Prime Minister, Narendra Modi, who decided to remain in his country because of the coronavirus crisis. Instead of travelling, Mr Modi participated in the discussions via video link.

He received many offers of help for India’s battle against Covid. The G7 leaders pledged one billion vaccine doses for poorer countries, a ‘big step towards vaccinating the world’, according to Boris Johnson.

The event included a strong pledge of financial support for the COVAX programme, which is administered by the World Health Organisation. India, Bangladesh and many other Asian countries are eligible for COVAX vaccines.

Japan is leading the drive to persuade wealthy countries to fund the COVAX programme, in part to counterbalance China’s vaccine diplomacy.

Another very significant part of the G7 summit for Asia was the announcement of a global infrastructure plan, to offer developing countries an alternative to doing business with China through its Belt and Road Initiative.

The G7 will offer financing for projects from railways to wind farms, through a programme known as the Build Back Better World (B3W) initiative.

Japan already makes an enormous effort to lead the way in Asia with infrastructure projects which benefit Japanese multinational companies and trading houses.

Narendra Modi said democracies should demonstrate the ability to implement such projects and promised that India would support infrastructure schemes in other parts of Asia, as well as in Africa.

However, if India spurns China and commits itself to the G7’s initiative instead, the United States and its allies may expect more loyalty from India in other spheres, such as defence and security.

Despite its huge economy, China was not invited to attend the G7 meeting in Cornwall, either as a memberor an observer.

However, discussions about China cropped up in almost every meeting throughout the event. The US Secretary of State, Antony Blinken, took the opportunity to telephone China’s top diplomat, Yang Jiechi.He repeated America’s accusation that the Chinese are committing ‘ongoing genocide and crimes against humanity’ in Xinjiang and asked China to cease its pressure campaign against Taiwan.

In response, Yang Jiechi told the US to respect China’s sovereignty and territorial integrity and ‘not to interfere in China’s internal affairs’.

The Chinese Embassy in the UK dismissed the G7 event in Cornwall as ‘pseudo-multilateralism, serving the interests of a small clique or political bloc’.

Xinjiang, Hong Kong and Taiwan were also mentioned specifically in the G7’s final communique, although in slightly softer language than the Americans would have wanted.

In the days that followed the summit, China increased the number of military aircraft it flew over Taiwanese airspace – a further reminder of a risk of conflict, which could draw in the great power rivals.

President Biden used a press event in Cornwall to say: ‘America is back in the business of leading the world alongside nations which share our mostly deeply held values. I think we’ve made progress in re-establishing credibility among our closest friends.’

The warm words and body language that greeted Mr Biden suggested that the other world leaders were pleased to be dealing with him, following all the trouble and disruption during Donald Trump’s presidency.

Prime Minister Johnson will feel that post-Brexit Britain has staged a successful diplomatic show. Some messages were particularly clear: there is a fresh approach to the way the G7 sees Asia, and dwindling hope of a detente with China.

Duncan Bartlett is the Editor of Asian Affairs magazine and a Research Associate at the SOAS China Institute, University of London. He is currently teaching diplomacy and international relations on the Economist Executive Education course, the New Global Order