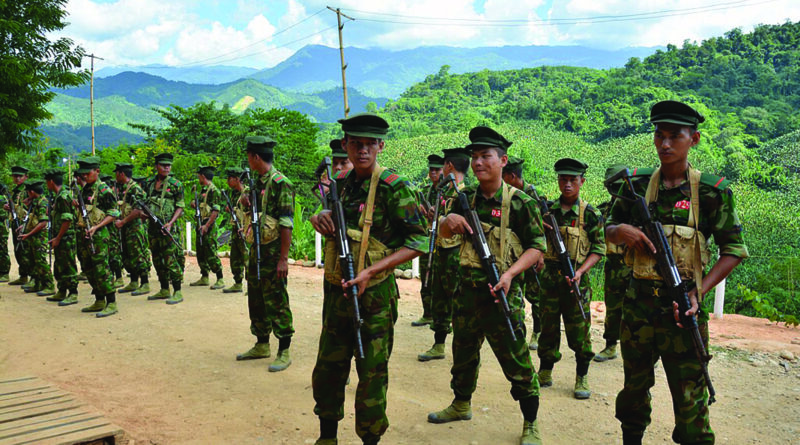 A most uncivil war

As violence continues to rage across Myanmar, Sudha Ramachandran  assesses the various armed groups confronting the junta, and compares the situation with other conflicts such as Syria

Myanmar is sinking deeper by the day into a civil war. Since the military coup on February 1, the situation in the country has deteriorated alarmingly. On the one hand, the Tatmadaw, as the Myanmar military is known, is unleashing horrific violence. In addition to brutal crackdowns on unarmed civilians in the cities, it is using aerial bombing and artillery strikes on villages and small towns.

Meanwhile, a growing number of youth are picking up arms to fight the junta and the number of armed militias has greatly multiplied. Violence and counter-violence is surging and spiralling.

For several weeks following the coup, Myanmar’s cities and towns were engulfed by mass demonstrations by unarmed civilians protesting the military’s power grab. The Tatmadaw’s use of extreme violence resulted in a large number of civilian casualties, including children. But it alsoserved to transform the nature of resistance to the junta.

Frustrated with the failure of non-violent protest to drive change, a growing number of young women and men have been turning to armed struggle. Hundreds are reported to have fled to borderland areas in the Kachin, Karen and Shan states. These areas are under the control of ethnic armed organisations (EAOs), which have battled the Tatmadaw for decades. The EAOs are now providing the anti-junta activists with sanctuary and combat training.

Young people are also fleeing across borders into India’s northeast, where they are reported to be receiving training from Indian insurgent groups.

The last couple of months have seen a surge in attacks on military posts and personnel, local government offices and junta-appointed government functionaries. Recently formed militias like the Chinland Defense Force (CDF) managed to take control of Mindat town in western Chin state. It took the military around three weeks to wrest Mindat back from the CDF.

Myanmar is not new to armed conflict.Several insurgencies, some even predating independence, have raged for decades in the country’s borderlands. The EAOs have battled military and civilian governments for greater autonomy and even independence.

Well-armed and battle-hardened EAOs like the Kachin Independence Army (KIA) and the Karen National Liberation Army (KNLA) have stepped up their offensives against the military in recent months. They have seized army bases and police posts across the Kachin and Karen states. In a two-day encounter in April, the KIA wiped out almost an entire army battalion.

Then, on May 5, the National Unity Government (NUG), the shadow government which comprises the National League for Democracy (NLD) and other anti-junta parties, announced a military wing, the People’s Defense Force (PDF). Two days later, it designated the Myanmar military and affiliated organisations as ‘terrorist organisations’. It is hoping to bring under its command the various armed anti-junta groups.

While several of the recently formed militias have joined hands with the PDF, the EAOs have adopted a cautious stance. They are deeply suspicious of each other and of the NLD. In power, the predominantly Bamar NLD conducted itself as a defender of the interests of Myanmar’s Bamar majority. Many NLD leaders were racist in their outlook, and the party’s leader Aung San Suu Kyi backed the military’s offensives against the Rohingya Muslims. The NLD is said to have even blocked proposals for regional autonomy.

Therefore, Myanmar’s ethnic minorities have few illusions about the NLD. Even if the partywere to return to power, they believe it is unlikely to meet the demands of the EAOs. Hence, they have little reason to co-operate with the NLD, and operate under the PDF’s command.

As for the PDF and the militias under its command, its fighters are poorly trained and lack the tenacity of the EAO fighters. Although military officials have defected to the PDF and could provide it with the military leadership and strategic expertise it needs, they comprise only a small number and may not have much of an impact.

Despite their differences, a certain degree of tactical co-operation appears to be happening between some EAOs and Bamar-dominated militias. In late April, air force bases at Magway and Meiktila in central Myanmar came under rocket attack. The missiles were reportedly procured from the KIA or the KNLA but neither of these two groups could have fired these missiles without the support of local Bamars.

Hence, co-operation between EAOs and Bamars is necessary for the EAOs to be able to reach into and attack the Tatmadaw in central Myanmar. Likewise, without the backing of the EAOs, PDF and Bamar militias will crumble in the long run. They need arms and training from the EAOs to face up to the formidable Tatmadaw.

A battle-hardened force, the Tatmadaw has around 350,000 soldiers in its ranks.Its arsenal is modern and,significantly, it does not hesitate to use its weaponry on unarmed civilians.

Indeed, its response to attacks by opponents has been ferocious.On May 31, the Karenni Nationalities Defense Force ambushed Tatmadaw 150 soldiers. Scores of soldiers were killed in the encounter. The Tatmadaw’s response to the ambush was swift and savage. It deployed helicopters and heavy artillery, even fighter jets,to wipe out Karen villages. Mass graves of civilians it detained and interrogated have been found in the Myawaddy township.

The new militias have been able to inflict losses on the Tatmadaw. But whether they will be able to sustain their fight is doubtful. In the early 1990s, when several pro-democracy activists from the cities went into the jungles for sanctuary and training, they were unable to survive the difficult conditions. Ill-equipped and poorly trained, large numbers of them died in encounters with the Tatmadaw, while many lost their lives to malaria and other diseases. Several returned home unable to cope with the tough life that a rebel has to endure.

Could this be the fate again of the city-bred fighters of the new militias?

Analysts are predicting that the violence in Myanmar could degenerate into a Syria-like civil war, with the United States backing the anti-junta militias and Russia and China, Myanmar’s top weapons suppliers, selling arms to the junta.

However, given the losses it has incurred in Syria, Libya and Afghanistan, the US is said to be less enthusiastic about getting fully involved in Myanmar imbroglio at this point. As for China, it may not play the role that Russia or Iran did in Syria, of fully backing one side in the conflict.

Although China was close to the Tatmadaw in the past, the relationship has not been free of tensions. Indeed, Beijing was not particularly enthused by the Tatmadaw’s staging of a coup in February, as it had begun building a strong relationship with the NLD government. Additionally, China is wary of fuelling a civil war in a country that lies at its underbelly. It would put in peril Belt and Road projects, especially those of the China-Myanmar Economic Corridor. Importantly, an expanding and intensifying civil war in Myanmar would trigger a destabilising flow of refugees into China, whom Beijing is not keen to shelter.

Another difference between the civil war situations in Myanmar and Syria is the role of foreign fighters. Unlike the Syrian civil war, which attracted global jihadists and sectarian extremists, foreign fighters are not operating inside Myanmar. There are ethnic links between the Chin and groups in India’s Mizoram state,but although India’s northeast is a restive region that is home to dozens of armed insurgents, they are unlikely to join the fighting in Myanmar.

The situation in Myanmar is as complex as that which existed in Syria. But as long as the big powers don’t step in to further fuel the fighting in a major way, the civil war in Myanmar will continue to simmer but is unlikely to explode as in Syria.