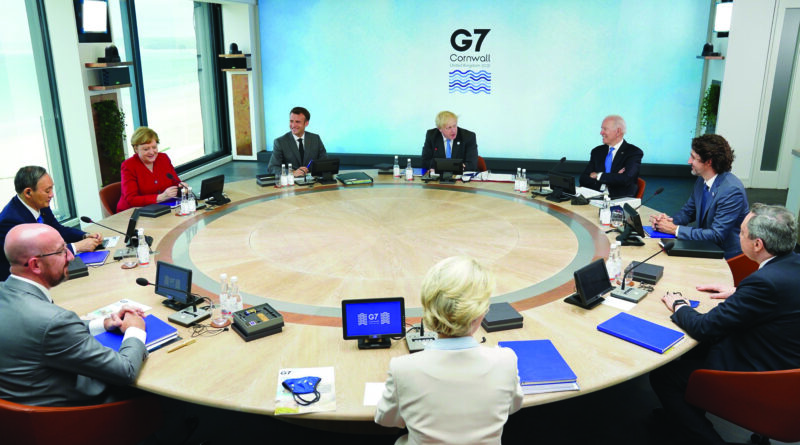 With plans afoot to finance a green global infrastructure programme to counter China’s BRI, Richard Gregson predicts that India could become the backbone of this progressive project

The G-7 Build Back Better World (BBBW or B3W) initiative, aimed at unlocking private-public capital to finance the developing world’s infrastructure needs, has come at an opportune time, with the world in the throes of an unprecedented health and economic crisis. Asexisting international institutions, built around IMF-World Bank neo-conservative ideals, totter, unable to meet the needs of a crisis-stricken world, US President Joe Biden’s forward-looking initiative seems to have evoked optimism around the world.

That it is being proposed as a sustainable and green alternative to China’s reckless Belt & Road Initiative (BRI) and the so-called Maritime Silk Road must have been reassuring for countries committed to democracy and an open society, including those caught indebt-traps and the cobweb of corruption and opaqueness spun by BRI projects being haphazardly implemented across the continents.

Unveiled during the G7 summit in the British county of Cornwall,a White House fact sheet described B3W as an ‘affirmative initiative’ to help low and middle-income countries cover the vast cost of green infrastructure projects, as well as health and digital technology, while ensuring gender equality and fair labour practices. The G7 would contribute upwards of US$40 trillion towards the project, with different members of the group responsible for different parts of the world.B3W will‘transform the financing of infrastructure projects in developing countries’, says a Downing Street press release.

G7 leaders said that the B3W would be ‘values-driven, high-standard and transparent’

Given that India is a stout opponent of the BRI and a target ofrepeatedintrusions by the Chinese People’s Liberation Army, the Indian government is carefully studying theG7’s multilateral initiative. Indian business houses and trade and commerce bodies have already hinted that the country, given its large pool of highly qualified and trained manpower, can undertake the implementation ofB3W projects in a highly competitive environment because of its relatively lower wages and overhead costs.

Most BRI projects are being executed by Chinese companies because of their expertise and experience, not to mention the conditionalities imposed on borrowing countries. In contrast, Indian companies can undertake projects through competitive bidding. And, of course, they can work in technical collaboration with companies from developed countries to ensure that high standards and environmental goals are duly met. Besides, India has several areas of strength, including civil engineering, highway building, railway line laying, hydro-electric dams, the construction of airports and seaportsand, of course, IT and communication.

Launched some eight years ago, China’s BRI is already a global behemoth. As many as 138 nations, including EU member states Greece and Italy, had signed BRI cooperation agreements with China for more than 2,600 projects worth US$3.7 trillion by the end of 2020. Some 20 per cent of projects suffered serious setbacks due to the Covid-19 pandemic, according to the Chinese foreign ministry. So far, the Chinese have invested a colossal $690 billion in infrastructure projects in nearly 100 countries.

India’s opposition to the BRI is not only because it passes through its territory in Pakistan-Occupied Kashmir, but also due to the secretive nature of the deals with countries the Belt &Road runs through.The Chinese have shrewdly combined geopolitics with debt diplomacy in their supposedly modern version of the Silk Road. The BRI Chinese checkers began with encirclement of India in the east (Bangladesh, Myanmar), west (Pakistan), the south (Sri Lanka) and north (Nepal), and meticulous expansion in Southeast Asia to strengthen its geostrategic presence.

A statement made by India’s Ministry of External Affairs on May 13, 2017 firmly stated that connectivity initiatives must be based on universally recognised international norms, good governance, rule of law, openness, transparency and equality:‘Connectivity initiatives must follow principles of financial responsibility to avoid projects that would create unsustainable debt burden for communities; balanced ecological and environmental protection and preservation standards; transparent assessment of project costs; and skill and technology transfer to help long term running and maintenance of the assets created by local communities.’

As if reiterating the position taken by India, unveiling the global partnership on June 12the G7 leaders said that the B3W would be ‘values-driven, high-standard and transparent’. BRI projects in several developing countries in Asia and Africa have been tagged for lacking transparency and being economically unsustainable, leading the borrowing country into a debt trap.

A widely cited example is Sri Lanka. When the South Asian island nation’s BRI debts became unviable, it was forced to sign a 99-year lease with China Merchants Port Holdings (CMPH), which got a 70 per cent stake in the strategic Hambantota Port,along with 1,235 acres of land. Undeterred by the Hambantota faux pax, the Chinese have embarked upon a $1.4 billion Colombo port city project, merely 300 kilometres from India,where a tax-free enclave is being developed by China along the lines of Dubai and Singapore. A part of China’s ambitious Maritime Silk Road, the tax heaven is being built on reclaimed sea land, adjoining the Port of Colombo. So far, Chinese loans to this tiny pearl-shaped island amount to almost $8 billion, while its total foreign debts stood at little over $50 billion, as of December 2020.

The China-Pakistan Economic Corridor (CPEC), a flagship BRI project, and hydro-electric projects in Pakistan have been under a cloud and the country had to seek an emergency loan from the IMF to avert default in repayment of its loans. In 2017, Pakistan owed $7.2 billion in debts to China,which increased to $19 billion in April 2018 and $30 billion in 2020, mostly due to borrowings towards CPEC projects.

In the case of Kyaukpyu port in Myanmar, the Chinese, accused of corruption and kickbacks, had to renegotiate the project costs from $7.3 billion down to $1.3 billion, following widespread protests.

The B3W is still at a nascent stage. It is not clear how the G7 countries, already reeling from a financial crisis, will be able to mobilise resources for their ambitious plan. Not every member of the group fully subscribes to the anti-China narrative, particularly France, Italy and Germany. The EU adopted a resolution on January 21, 2021 to create a global EU Connectivity Strategy as an extension of its EU-Asia Connectivity Strategy.  Initially it was a collaboration between the EU and Japan, which was then expanded to an EU-ASEAN connectivity in December 2020, and more recently a potential global infrastructure partnership between the EU and India.

Assuming the money will come from G7 countries providing funding alongside private institutions, will they be prepared to lend in high-risk circumstances, as the Chinese have been doing? For instance, when no one from Europe showed interest in the Greek port of Piraeus, it was the Chinese shipping giant COSCO that pitched in. Greece had to join the BRI as it was unable to find western investors following its economic collapse. Most developing countries are in dire straits today.

Less than a week before the G7 summit in the UK, the inaugural meeting of the consultation group of the Blue Dot network was held in Paris.Participating, along with representatives from western governments and Japan, were other stakeholders such as members of civil society, academics and 150 global business executives.The US, Japan and Australia, it may be recalled, had launched the Blue Dot Network on the sidelines of the November 2019 ASEAN summit.

Addressing the meeting, Mathias Cormann, Secretary-General, OECD, said: ‘Now more than ever, we need effective global cooperation and coordination and innovative approaches consistent with our values, drawn from multilateral and multi-stakeholder collaboration, as well as credible and effective international standards.’

In 2018, the US passed the BUILD (Better Utilisation of Investment Leading to Development) Act, which created a new agency,the United States International Development and Financial Corporation (USIDFC), with a corpus of $60 billion to facilitate private sector involvement in the Indo-Pacific, especially African countries. Later, the then US Secretary of State Mike Pompeo had also made a commitment of $113 million for technology, infrastructure and energy projects in the Indo-Pacific.

Notwithstanding high-sounding declarations, if the B3W is to succeed in building a better world, where development goes hand-in-hand with environmental sustainability and financial stability, the various initiatives taken over the last couple of years need to be implemented in a coordinated manner, perhaps under one umbrella, with countries like India, South Africa and South Korea playing a key role in project implementation. Only then might the dream of ‘Building Back a Better World’ come true.

Richard Gregson is a freelance journalist currently living in Canada