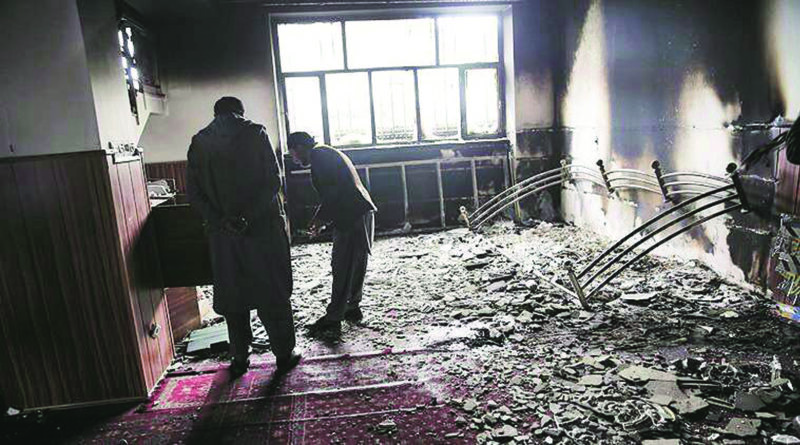 As American and NATO troops pull out of Afghanistan,  Yvonne Gill asks: will a strange new power conglomerate takeover the country?

With the looming US withdrawal from Afghanistan, and the NATO allies left with little choice but to follow suit, a sinister power conglomeration seems to be scheming to fill this strategic void. China, Pakistan, the Afghan Taliban, Turkey and Iran may have conflicting ideas and objectives, from proto-Islamic hegemony to creating strategic depth or merely an anti-India agenda, but the cocktail brewing in the Hindukush Mountains could prove explosive for this vast Asian region already plagued with internal and external conflicts.

If this incongruous power axis were to become a reality, Afghanistan would turn into a hotbed of multi-layered, multi-ethnic and multi-sect Islamic extremism. The fire of this insane alliance would ravage the Indian subcontinent in the South East, and Central Asia and the Middle East in the North West. The adjoining restive areas of China, such as Xinjiang, might not escape the heat of the flames ignited in a Taliban-governed Afghanistan.

The comity of nations will have to ensure that Afghanistan does not become another pawn in the power game, but transits to a modern democratic state that strives for the prosperity of its people, as well as regional and global peace and stability. China, for its part, would end up repenting its mistake of playing with fire, just as the US has learned a bloody lesson,having burned billions of dollars and lost thousands of lives, only to withdraw unceremoniously after a futile 20-year military misadventure.

The signals from Afghanistan, which is witnessing increasing numbers of daily killings and bombings, are alarming, to say the least. One third of Afghanistan is already under Taliban control. More districts are collapsing, with the US-equipped Afghan government forces making ‘tactical retreats’ – a euphemism used by the ruling clique in Kabul to cover up their defeat. Emboldened, the Taliban have been launching attacks on Kabul, prompting the Americans to consider carrying out air strikes on rebel positions.

While the Taliban, which has over 80,000 regular fighters, is spearheading the attack on government positions in the provinces, the myriad terrorist groups active in the rural labyrinth of this mountainous country have escalated bombings and killings, targeting innocent people, government employees, members of the media and those employed in voluntary work. The Taliban, with an eye on the high seat of power in Kabul, simply deny their involvement, even though there is a sea of evidence to show their complicity.

For Pakistan, the key to its strategic interest is Kashmir

Taliban and terror outfits like the Haqqani Network, al-Qaeda, Islamic State-Khorasan Province (ISKP), IS and Daesh have interconnections, all being under the tutelage of Pakistan’s Inter-Service Intelligence (ISI) and the military establishment. Most of the Taliban’s leadership is based in Quetta, even today. Mullah Abdul Ghani Baradar, a co-founder of the Taliban movement in Afghanistan, and other Taliban leaders fled to Pakistan when they came under attack from American forces. Later, many were jailed as a result of US pressure, and were released in 2018 as part of US-sponsored peace negotiations at Doha.

For Pakistan, the key to its strategic interest is Kashmir. This is a point of convergence for the various, and often competing, fundamentalist groups too. But to make its proxy war against India in Kashmir effective and to evade surveillance, the Pakistan military establishment has been spawning numerous terror outfits, which fit quite well into the jihadi jigsaw puzzle.

Pakistan-sponsored Kashmiri terrorist groups like Lashkar-e-Taiba, Jaish-e-Mohammed and Hizbul Mujahidin have ties with the Taliban, al-Qaeda, IS, ISKP, and others. For instance, ISKP-chief Aslam Farooqi, the mastermind behind the attack on Kabul’s Guru Har Rai Sahib Gurudwara in March last year, in which 25 Afghan Sikhs were gunned down by ISKP terrorists, was formerly a Lashkar operative. Al-Qaeda and ISIS not only have affiliates in Kashmir; they have been recruiting misguided youth from India for their Syrian operations. Similarly, the banned Indian Mujahidin boasts about its close ties with al-Qaeda in the Indian Subcontinent (AQIS).

Pakistan, we may recall, was the frontier post of a US-led proxy war against the Soviet occupation of Afghanistan in the 1980s . The Arab monarchies poured billions of petro-dollars into the thousands of madrassas (Islamic seminaries) that proliferated and prospered in Pakistan, inculcating jihadi ideology among innocent young Afghans and Pakistanis and encouraging them to fight as Mujahedeen to liberate Afghanistan from communist infidels.

From the Mujahedeen, the Taliban emerged as a distinct group of warriors, as well as al-Qaeda, a battle-hardened group comprising Arab fighter engaged in the Afghan jihad. Pakistan’s military establishment acted as the umbrella body, funnelling arms and funds to militants of all hues. It shouldn’t surprise anyone that Islamic terrorism raised its ugly head in Kashmir and Khalistani terrorism arose in Punjab during the same period, openly abetted and armed by Pakistan.

An estimated 36,000 madrassas in Pakistan still produce a lethal crop of hate-filled youth, primed to kill and give up their lives in the name of a dystopian form of Islam fed to them by semi-literate mullahs. The madrassas are largely funded by money from the Middle East and patronised by the military establishment, which wants to maintain a strategic edge against India, by hook or by crook.

Enter China, which is now a part of the big power game. Its Belt & Road Initiative (BRI) is fledging in Pakistan through the China-Pakistan Economic Corridor (CPEC), which provides Beijing with a strategic outlet to the Arabian Sea through Pakistan via the Karakorum highway. If China is able to gain a firm foothold in Afghanistan post-US withdrawal, it will have alternative access to Pakistan through the narrow Wakhjir Pass, situated at the tri-junction of Pakistan-occupied Gilgit-Baltistan, Tajikistan and China. The area has one of the largest untapped copper deposits in the world. China Metallurgical Group (MCC) already has a 30-year lease on copper mining, signed in a $3.5 billion deal in 2007 – the biggest foreign investment in the history of Afghanistan.

Another player itching to jump into the fray is Turkish President Recep Tayyip Erdogan. Basking in the false glory of the Ottoman Caliphate, he has been promoting a radical brand of Turkish Islamic orthodoxy, ditching Turkey’s secular tradition, painstakingly nurtured by Mustafa Kemal Atatürk. Popular in Pakistan, he is only too eager to step in as ‘peace-keeper’ in Afghanistan. Having failed to make much of a dent in Arab areas, except among the Palestinians and Lebanese, he now wants to spread his influence in South Asia.

Erdogan’s government militarily supported Azerbaijan against Armenia in the conflict over Nagorno-Karabakh, inhabited mostly by ethnic Armenians.Ethno-Turkic terrorist organisations like the Islamic Movement of Uzbekistan (IMU) and Eastern Turkistan Islamic Movement (ETIM) would get a big boost if the Taliban were to come to power in Afghanistan, endangering the stability of Uzbekistan and other Central Asia countries.

More worrying are Turkey’s new-found links with jihadi groups like the Popular Front of India (PFI) and Jamaat-i-Islami, a Kashmiri jihadist group whose cadre were recruited and deployed as Islamic mercenaries in Syria and Libya by Erdogan’s secretive paramilitary group SADAT, led by his former chief military aide Adnan Tanrıverdi.

Iran, being Afghanistan’s immediate neighbour, has generally been liberal with its military, tactical and financial support to the Taliban and Shia Islamists, who operate in parts of the country. The Taliban, unlike other Sunni groups, has been wary of targeting Shias, though this is not true of other Sunni militia.  Over the last few years, Iran has set its sights on India and has been engaged in radicalisation of the Shia minority in Kargil and other Shia pockets of Jammu &Kashmir, intelligence sources maintain.

In the aftermath of a Taliban takeover, Pakistan, under pressure of being put on the blacklist of global money-laundering and terrorist financing watchdog FATF, will shift most of the terrorist training camps in Pakistan-occupied Kashmir to Afghanistan, which experts say would emerge as a safe haven for jihadi outfits. Indian security forces also fear Pakistan could divert many battle-hardened and highly radicalised Taliban fighters to Kashmir, according to Abhinav Pandya, writing in the National Interest, a magazine published by a US think tank.

‘The process has already begun as Pakistan has been reviving Al-Badr, a defunct 1990s’ terror group in Kashmir,’ writes Pandya. ‘Al-Badr has a strong base in the Afghanistan-Pakistan region and reportedly has ties with the Haqqani Network, the sword arm of the Taliban.’

Apart from spelling doom for the region and fanning fanaticism across South Asia, Central Asia and the Middle East, the Talibanisation of Afghanistan will greatly strengthen the Pakistan-Chinese-Turkey-Iran nexus, threatening world peace and security.