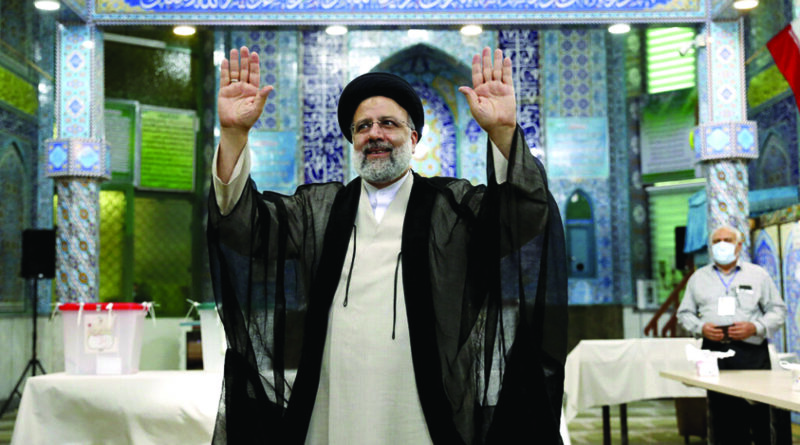 Raised to the presidency

Iranians have voted in the head of the judiciary, Ebrahim Raisi, as their new president.  Nicholas Nugent reflects on the man, the electoral process and what the choice of a hardliner signals for Iran’s dealings with the United States

To nobody’s surprise, Ebrahim Raisi won Iran’s June 18 election outright, without the need for a run-off between leading candidates, which takes place if no candidate wins more than 50 per cent of the votes.

On election day, there were only four candidates, three others having withdrawn once it was clear that Raisi had an unassailable lead.

Nearly 600 other contenders were rejected earlier by the Council of Guardians, an unelected body whose role is to vet candidates for office. Among those rejected were former president Mahmoud Ahmadinejad, current vice president Eshaq Jahangiri, former speaker of parliament Ali Larjani and a host of former ministers and ambassadors. Several women candidates were also excluded.

The Council of Guardians seemed determined that the job should go to a conservative rather than a so-called ‘reformer’ like the incumbent, Hassan Rouhani. Having served two terms Rouhani was not eligible to stand again.

The election of Ebrahim Raisi, 60, both a judge and a cleric, is seen to have been engineered by the country’s supreme leader, Ayatollah Ali Khamanei. The 82-year-old Khamanei, who has been supreme leader for more than three decades and has the last word on all issues of policy, regards Raisi as his potential successor.

These are changed days for Raisi. He was an unsuccessful presidential candidate when President Rouhani won a second term in 2017, though was compensated by being awarded the post of head of the judiciary, a controversial appointment, given that he was a junior prosecutor when the newly empowered regime took revenge on dissidents who had opposed the 1979 Islamic Revolution. Several thousand of the new regime’s opponents were hanged in 1988. Raisi’s enemies dubbed him ‘the butcher of Tehran’.

The United States imposed sanctions on Raisi for his role in those judicial executions, which may in its way have enhanced his standing with the electorate. Raisi won 62 per cent of the poll, pulling in 17.8 million votes, compared with his next nearest rival, central bank governor Abdolnaser Hemmati, who took 3.3 million.

A moderate by Iranian standards, Hemmati’s campaign was doomed by the dire state of Iran’s economy. Since the US withdrew from the seven-country deal limiting Iran’s nuclear ambitions and reimposed sanctions, the national currency has plunged in value by around 50 per cent.

A low turnout on election day – far lower than at previous presidential polls – may have been a protest at the state of the economy. Iranians may also have been registering displeasure at what many regard as the rigging of the election.

All parties have powerful reasons for wanting to conclude a deal

As one of the approved candidates, Mohsen Mehralizadeh, said in a television debate between candidates: ‘The regime aligned the sun, moon and the heavens to make one particular person the president.’ Mehralizadeh withdrew from the contest shortly before votes were cast.

With Raisi due to replace Rouhani in early August, attention now focuses on whether the Joint Comprehensive Plan of Action (JCPOA) to prevent Iran becoming a nuclear power will be reactivated. It collapsed three years ago, after former US president Donald Trump, calling it ‘the worst deal ever’, withdrew the US. He opted instead for a policy of ‘maximum pressure’ on Iran by introducing punitive sanctions.

While this did not bring down the regime, it has caused considerable hardship, sending many ordinary Iranians towards the breadline. Iran’s response was to accelerate its drive to become a nuclear power.

Talks to revive the deal are currently underway in the Austrian capital Vienna, involving Iran and the six other signatories – the United States, China, Russia, Britain, France and Germany. The 27-nation European Union is also a participant. President Biden, who was vice president when the JCPOA was originally agreed in 2015, has appointed veterans of those negotiations to the current talks.

The US is understood to be insisting that a revised deal includes additional restraints to prevent Iran’s involvement in Lebanon and Syria, through its patronage of Hezbollah, and Yemen, where it gives support to the Houthi rebels. Iran would, in any case, be required to ‘return to compliance’ – reduce its level of uranium enrichment and allow the International Atomic Energy Agency to resume scrutiny of its nuclear installations – before any sanctions are lifted.

Asked about the JCPOA negotiations, President-elect Raisi addressed the US directly, saying: ‘It is you who were committed to removing sanctions and you did not. Go back to it and implement your commitments.’ Saying he would not be willing to meet US President Biden, Raisi told journalists that Iran’s support for militant groups and its ballistic missile programme were ‘not negotiable’. However, he did indicate he would support a new deal, provided it is in Iran’s interests, and said ‘all sanctions imposed on Iran must be lifted and verified by Tehran’.

It is the supreme leader, Ayatollah Ali Khamenei, who will approve or reject whatever terms are concluded in Vienna. All parties have powerful reasons for wanting to conclude a deal. While it is by no means certain that agreement will result, it is likely there will be an outcome before Mr Raisi becomes president in early August.

If no deal is reached, Iran’s options are limited. In March it signed a 25-year cooperation agreement with China, one of the JCPOA parties, suggesting it might become ever more dependent on Beijing. China – one of few countries still buying Iranian oil, despite US sanctions – has supplied Iran with COVID-19 vaccines. It also supported Iran’s development of a 5G telephone network after the Swedish company Ericsson pulled out, and has signalled willingness to assist with other infrastructural projects.

There has, too, been some strengthening of Iran’s relations with Russia, another JCPOA signatory. And at a post-election news conference, the president elect said he hoped for an improvement in relations with Saudi Arabia, which have been strained over their support for rival parties in Yemen.

The biggest domestic worry for the new president will be the prospect of a new round of street protests or civil disobedience, like those which have taken place several times since 2015. In 2018 there was a backlash when the JCPOA deal failed to bring about any improvement in living standards, and in 2019 protests followed the government’s raising of fuel prices.

Whether or not a new anti-nuclear deal is agreed and sanctions lifted, the soon-to-be President Raisi will be alert to the risk for the regime, should a groundswell of public discontent explode once more. Poverty and food shortages are the greatest challenges to the loyalty of Iran’s citizens.

Nicholas Nugent, who was formerly with the BBC World Service, has reported from Iran