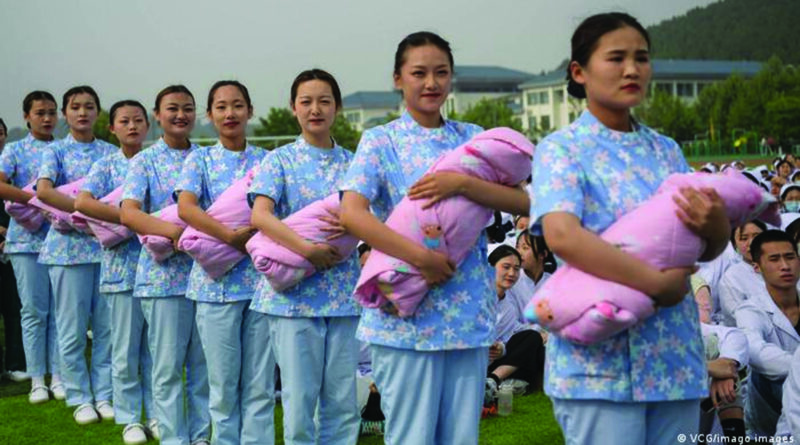 The business of babies

China has announced it will allow all couples to have three children, to combat an ageing society and a declining population. While some people welcome the move, others are less enthusiastic.  Yuwen Wu  has been listening to Chinese voices

Respect for older people has long been a characteristic of Chinese culture. Unlike in many Western countries, where euphemisms for old age such as ‘senior citizen’ are common, in China, the word ‘old’ carries a connotation of honour.

It is customary to add the honorific title of ‘old’(老 lǎo) to the name of a person. For example, a famous poet, Guo Mo Ruo (1892-1978) is normally referred to as Guo Lao 郭guō老 lǎo, meaning ‘Old Guo’.

Yet, despite the respect in which older people are held, an ageing population brings with it legitimate causes for concern.

By 2035, over 30 per cent of China’s population will be aged 60 or over, according to a Xinhua report. The government believes that this trend, combined with a declining fertility rate and continued fall in births, poses a huge challenge to China’s economic development and prosperity.

The country’s top leadership has therefore decided to encourage people to have more children. In a major policy shift, the two-child limit, imposed five years ago, has been lifted and couples are now encouraged to have three offspring.

Since the announcement, pictures of happy smiling kids and their parents have begun to proliferate on social media.

On Fathers’ Day in June, a film appeared on the video platform HaoKan, owned by internet company Baidu, featuring eight fathers, who all voiced enthusiastic support for the three-child policy.

The men’s optimism grates against the messages from Chinese women which I have been hearing on social media and in conversations with my friends.

Many posts focus on the cost of raising children, the lack of childcare support, and the difficulties women in particular face when trying to balance their career with parenthood. For example, a woman calling herself ‘Sister Wu’ said on Sina Weibo, China’s biggest microblogging site: ‘I just want to say I support those who want to have more (children) and those who resolutely don’t want any, as long as it’s their own choice.  As to others, don’t try to blackmail us for whatever reason.’

‘How can I feed my family?’ she asks.

Another netizen by the name of Cao Zhenyi pleads with the authorities: ‘Rather than encouraging people to have a second or third child, you should find out why people don’t want children in the first place and try to resolve these issues.’

These sentiments were echoed in conversations I had with two women from Beijing.

Viv is in her early 40s with a son.  She told me she feels that the third child policy would be welcomed by some, such as rich people who can afford good housing, childcare and education, and also by people in China’s rural areas. Some of them defied penalties and other punishments in the past to have more children than they were officially allowed.

However, there is often a great divide between urban and rural life in China.

‘As for people in the cities,’ Viv reckons, ‘having two kids might be just about manageable, but three is too much. There is so much pressure on us. I do not want to spend my whole life struggling with motherhood.  I am definitely not having a second child, let alone a third.’

Such sentiment is echoed by Apple, a mother of one in her late 30s. ‘None of my friends are talking about a third child; there is too much pressure living in the cities; many young people don’t even want to get married, let alone have two or three kids.

‘The government doesn’t provide adequate support, such as subsidies for education, parental leave or social security. That’s why people feel so negative about the news. People are also worried that this development would further reduce women’s competitiveness in the job market and push them “back to the family”.  If we want to both have a career and look after kids, it’s much more difficult than [for] men.’

As a mother myself, I understand why many of these women feel that their personal choices are being ignored. Policies on how many children people should have are still dictated by the state in China, rather than by couples.

The government hoped that when it relaxed its one-child policy it would result in a rush to have two children, thus boosting the already declining fertility rate.

However, the take-up was disappointing. The pent-up demand lifted the birth rate in 2016 and 2017, but it has been slumping since 2018.

I do not believe that life has become much easier for parents in China in the past few years. If anything, conditions have become even more challenging as a result of fierce competition in the job market.

Many companies such as Alibaba expect their staff to join what they call the ‘9-9-6 culture’– meaning they are expected to work from 9am to 9pm, for six days a week. This is a nightmare for mothers and many Chinese netizens regard it as an abuse of women’s rights.

Alongside the criticism of the government’s approach, I have also found many suggestions online on how to address the issues. People say there should be more support to pay for the education of young children. Another idea is that the state should subsidise businesses that hire women and back firms which provide good maternity arrangements.

There is also a proposal to reward the parents of each new-born baby with a generous package of benefits to help meet the cost of daycare and housing.

But in my view, judging by the outcome of the second child policy from a few years ago, even if the government puts measures in place, or uses cash incentives, it may not bring about the desired baby boom.

A social change of that nature in China can’t be expected to happen quickly, despite the films featuring the friendly fathers.