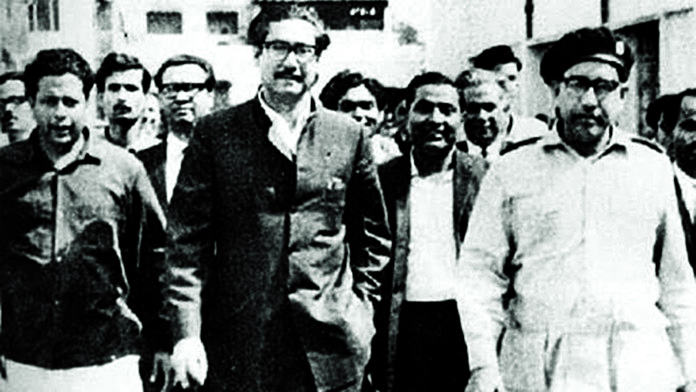 The road from Agartala

Fifty-three years ago, on 19June 1968, the trial of Sheikh Mujibur Rahman and thirty-four other Bengalis in the so-called Agartala Conspiracy Case, officially known as The State Vs Sheikh Mujibur Rahman and Others, got underway in Dhaka cantonment. The case was to hasten the fall of Field Marshal Ayub Khan, then commander-in-chief of the Pakistan army and the country’s authoritarian second president. Khan had thought the case would destroy Mujib. Ironically, it ended up destroying him.

Early in January 1968, in its attempt to convince people that India was involved in the conspiracy to have East Pakistan secede from the rest of Pakistan and turn itself into an independent state, the Pakistan government expelled an Indian diplomat, P.N. Ojha, from Dhaka.

Initial reports of mid-ranking Bengali officers from the Pakistan army, air force and navy, and members of the civil service, being taken into custody by the government came in December 1967. But it was not until 6 January 1968 that an official statement about the arrests would be made from Rawalpindi. Altogether, some 1500 Bengalis were placed under arrest by the authorities on charges of conspiracy to bring about the dismemberment of Pakistan.

However, as yet no formal charges had been filed against any individuals. This was because Pakistan’s military intelligence was frantically going around trying to convince a large number of those detained to testify in court against those who would be formally charged with the crime.

On 18 January, the Pakistan government informed the country that thirty-five individuals had been charged with conspiracy to split Pakistan and turn East Pakistan into an independent state, with the help of the Indian government. Top of this list was Sheikh Mujibur Rahman, president of the East Pakistan Awami League and in detention since May 1966 under the Defence of Pakistan Rules. Mujib had earlier, in February 1966, announced the Six Points, his radical programme for complete autonomy to be ensured for East Pakistan.

The trial of those accused in the Agartala Case commenced before a special tribunal comprising Justice S.A. Rahman, Justice Mujibur Rahman Khan and Justice Maksumul Hakeem. The last two were Bengalis and Hakeem was later to be independent Bangladesh’s ambassador abroad, in the post-Mujib period. A galaxy of lawyers was prepared to defend the accused. Sheikh Mujibur Rahman’s legal team was headed by the respected lawyer Abdus Salam Khan, and also on hand was Sir Thomas Williams, QC, from the United Kingdom – although he was compelled to return home due to his constant tailing by Pakistani intelligence. Ataur Rahman Khan, a former chief minister of East Pakistan, was defence counsel to his brother, the civil servant Khan Shamsur Rahman. Among other lawyers for the defence was Khan Bahadur Mohammad Ismail. The one prominent legal presence for the prosecution was Manzur Quader, who had once served as foreign minister in Ayub Khan’s government.

The Agartala Case marked the rise of Sheikh Mujibur Rahman as the spokesman of the Bengalis. His abundance of self-confidence was made clear in the early stages of the trial. When a western journalist asked him what he expected his fate to be, Mujib replied with characteristic unconcern: ‘You know, they can’t keep me here for more than six months.’ In the event, he was to be a free man in fewer than eight months.

On the opening day of the trial, Mujib spotted before him, a few feet away, a journalist he knew. He called out the man’s name, only to see the journalist not react, obviously fearful of all the intelligence agents present in the room. Mujib persisted. Eventually, compelled to respond, the journalist whispered, ‘Mujib Bhai, we can’t talk here…’ And it was then that the future Bangabandhu, Friend of Bengal, drew everyone’s attention to himself. He said, loud enough for everyone to hear, ‘Anyone who wishes to live in Bangladesh will have to talk to Sheikh Mujibur Rahman.’ He did not use the term ‘East Pakistan’.

As the weeks progressed into months, popular discontent against the Ayub regime began to manifest itself in an increasingly incendiary manner. It soon became apparent that Bengalis, outraged by the central government’s crude attempts to cast Mujib and the other accused in a bad light, were beginning to demand the departure of the regime and the withdrawal of the case.

Meanwhile, Sergeant Zahurul Huq, one of the accused in the case, was shot dead by soldiers in the cantonment. Moulana Abdul Hamid Khan Bhashani, the mercurial leader of the left-leaning National Awami Party, threatened to lead a crowd of Bengalis into the Dhaka cantonment if Mujib was not freed. An angry mob attacked the residential quarters of Justice S.A. Rahman, who flew off to West Pakistan with alacrity.

Events moved at unprecedented speed after that. On 22 February 1969, Vice Admiral A.R. Khan, Pakistan’s defence minister, announced the unconditional withdrawal of the Agartala Conspiracy Case and the release of all the accused. The next day, a million-strong crowd roared its approval when Tofail Ahmed, then a prominent student leader, proposed honouring Mujib as ‘Bangabandhu’, friend of Bengal.

On 24 February, Mujib flew to Rawalpindi to argue the case for the Six Points at the round table conference organised by a tottering Ayub regime. Then, on 5 December of that same year, at a meeting to commemorate the sixth death anniversary of Huseyn Shaheed Suhrawardy, former prime minister of undivided Bengal and former prime minister of Pakistan, Sheikh Mujibur Rahman informed Bengalis that henceforth, East Pakistan would be known as Bangladesh.

The first steps on the path to the future had been taken.