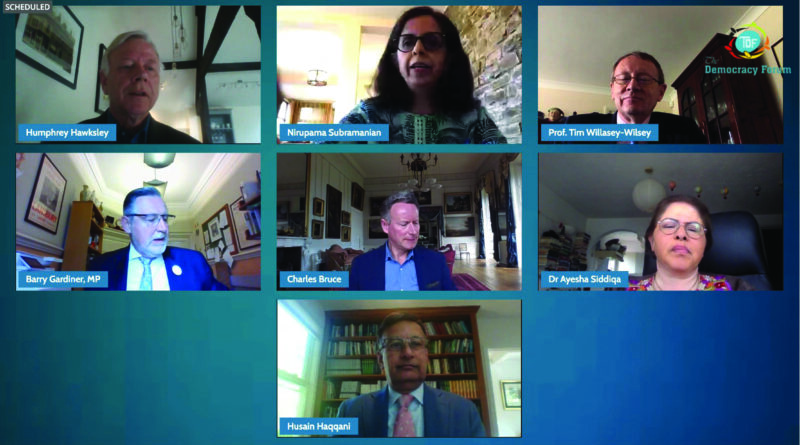 A June webinar hosted by The Democracy Forum attempted to fathom Pakistan’s recent overtures for peace with India, and asked: ‘Is China the elephant in the room?’

The historical backdrop and motivations underlying Pakistan’s overtures for peace with India, and the role of China in this scenario, was the theme for discussion at The Democracy Forum’s June 17 virtual seminar, which assembled a panel of experts from the worlds of academia, journalism and diplomacy.

Moderating the debate, author & former BBC Asia Correspondent Humphrey Hawksley said that India and Pakistan are weakened by their never-ending conflict, dating back to Partition, which limits trade and hampers wealth creation. This is, he said, a symbol of the massive failure of global and regional politics, and we must ask ourselves to what extent China is the elephant in the room vis-à-vis the situation.

In his introductory address, TDF Chair Lord Bruce referenced the Chief of Pakistan’s Army Staff General Bajwa, who said in February that Pakistan was committed to the idea of mutual respect and peaceful coexistence with India. Such overtures between India and Pakistan, it emerged, had been ongoing for several months, to pave the way for de-escalating the military standoff that has long characterised Indo-Pak relations. Although there have been numerous previous attempts at dialogue with India, regional peace and better ties, Lord Bruce said things seemed different this time, as Pakistan’s peace initiatives are starting to reflect more accurately the debilitating cost of its continuing isolation, and Gen. Bajwa was now focused more on economic than military objectives.

Our insight into the machinations of Pakistan’s India policy, Lord Bruce added, has to be conditioned by an understanding of its obligations to China, given massive Chinese investment in the country, and the scale of Pakistan’s debt to China.

Dr Ayesha Siddiqa, a political scientist, author and Research Associate at SOAS South Asia Institute, University of London, argued that in Pakistan’s military-civil ‘hybrid regime’ – in which the military was in charge of decision-making but the civilian government would share some responsibility for reactions and outcomes – the picture becomes fuzzy for observers, who wonder: who is doing what? There is a sense of division within the military on where Pakistan should stand regarding peace with India, said Siddiqa, and what is desired is a ‘managed truce’, where war becomes less of a possibility. Dr Siddiqa also highlighted the ‘nerve-racking issue of Kashmir’ that lies at the heart of the India-Pakistan peace process, and the difficulty of abandoning it without re-education. The military is the least capable stakeholder to manage that, and a primary stakeholder for a peace initiative needs to be a stable political government.

China had played a part in diffusing tensions between India and Pakistan in Kargil, for example, while, regarding China’s role in Pakistan, Pakistan wants to maintain its relations with both China and the US. If the Indo-Pacific was a room, she said, Pakistan would like to be standing inside, not outside. And if Pakistan is to become a geopolitical and geo-economic hub, its political institutions need to be repaired. For that, peace is essential but, while the generals understand that, it continues to be difficult for them to visualise it.

Attempting to unravel the complexity of India’s internal politics as it engages with Pakistan, and how this impacts the bilateral relationship was Nirupama Subramanian, National Editor, Mumbai, at The Indian Express.

How did we get to this point where India and Pakistan have agreed to observe the ceasefire? she wondered. One theory is that India saw the wisdom of dialogue with Pakistan at a time when it was grappling with the huge two-front military threat from China – to whom India is nevertheless bound to some degree by trade – on the LAC and Eastern Ladakh. Other theories are that it is because of outside pressure from the US or UAE, or the prospect of a Taliban takeover in Kabul.

In the Indian-Pakistan equation, the side that sues for peace is seen as the weaker side. For Pakistan, said Subramanian, it is seen as a loss of face if it makes peace with India, while on the Indian side, narratives are about Pakistan’s tanking economy, its inability to sustain troop deployment on the Afghan and Indian fronts, etc. So, concluded Subramanian, the process from here is not as easy as simply setting up talks.

Husain Haqqani, Director of South & Central Asia at the Hudson Institute and a former Ambassador of Pakistan to the United States, focused on how China has used Pakistan as a secondary deterrent for India by playing the ‘friend in need’ card in what he called Pakistan’s ‘India obsession’. China does not want war between Pakistan and India; it continues to trade with India, and that trade is much greater in volume than Chinese trade with Pakistan. But it likes the idea of Pakistan remaining mired in a national narrative and ideology that considers India to be an existential threat, as this ensures that most of India’s military remains positioned along the long border with Pakistan, and remains engaged in Kashmir. That suits China as it spares resources China would otherwise have to devote to confronting India. And without this narrative, India would be able to devote more military resources to the rest of Asia, rather than in South Asia.

Pakistan’s peace overtures to India, said Haqqani, usually come when the country’s leaders feel they need friends other than China, most of whom tend to advise Pakistan to befriend India rather than constantly challenging it, notwithstanding outstanding disputes between the two. Ironically, he said, China – which continues to encourage hardliners within Pakistan and hence keep the country where it is – has taken advantage of Pakistan’s perception of India as an existential threat without offering Pakistan the security Pakistanis believe they have – for example, the Chinese did not support Pakistan during the Kargil conflict. Haqqani also highlighted how China has supplanted the US as Pakistan’s biggest economic and military benefactor, and underscored the loss of trust in the US-Pak relationship.

Tim Willasey-Wilsey, Visiting Professor, Dept. of War Studies, King’s College, London, and a former senior British diplomat, considered the complex triangular relationship between India, China and Pakistan and how easy it is to assume that the outcome can only be disastrous. given the dangers implicit in, for instance, Kashmir, Afghanistan, along the Himalayan border, and Tibet, the use of terrorism and the presence of nuclear missiles. In a putative new cold war, the tensions created could be intense.

However, Willasey-Wilsey also addressed the idea that all three countries have considerable vulnerabilities which should act as a disincentive to war. For example, India got a shock when it found itself exposed to China and Pakistan at the same time, and for its part, China recognises the vulnerability of its Himalayan border and the possibility that it could be used (by the West through India) to destabilise its two most vulnerable provinces. And Pakistan, although committed to its all-weather partnership with China, does not wish China to be its only major alliance, or to become overly reliant on Beijing. But, Willasey-Wilsey warned, we live in an age of ‘just do it’ politics with unwise decisions being taken on the hoof, and the real danger is that the three countries do not fully understand or even believe each other’s red lines.

Summing up, TDF Chair Barry Gardiner MP said that, vis-à-vis India, Pakistan and China, if one scratches history, one finds geography; scratch geography, and you find economics. If progress towards peace is to be made, he said, it has to be made within a ‘sealed box’, but outside of that sealed box, there needs to be a wider education about how to visualise that peace.