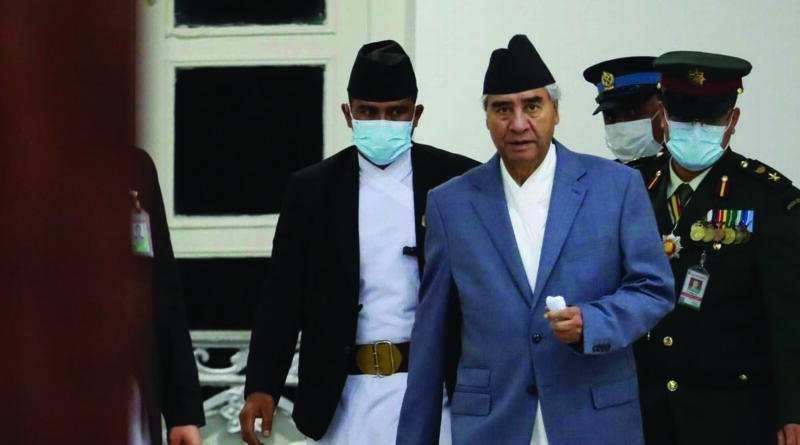 China losing grip on its ‘finger’

In the wake of a recent judgment by Nepal’s highest court, Beijing’s influence on its tiny neighbour may start to wane. Richard Gregson reports

Nepal is in turmoil, thanks to Big Brother China. The Supreme Court of Nepal’s order dismissing Prime Minister K.P. Oli Sharma, at whose bidding President Bidhya Devi Bhandari had arbitrarily dismissed the lower house of Parliament and announced a mid-term election, has come as a shocker for the country’s pro-China lobby.

Delivering a verdict on a writ petition filed by 146 united opposition lawmakers, a five-member Constitutional Bench of the apex court reinstated Nepal’s House of Representatives and appointed Sher Bahadur Deuba, leader of the opposition Nepali Congress, as the country’s new Prime Minister.

But why has China been meddling in Nepal’s internal affairs? It is because territorial hegemony is something the Chinese Communist Party (CCP) fiercely pursues. Almost all countries which border the Asian Dragon have had to face an aggressive China, either diplomatically or militarily. These include its former allies, such as the Soviet Union and Vietnam.

Mao Zedong’s policies of the 1960s Cultural Revolution era included ‘exporting’ the Maoist brand of ‘revolution’ to the world. But communist parties across the globe split from the radicals treading the Maoist path of armed militancy, which continues to this day.

Inspired by the Naxalite (Maoist) movement in India – whose insurgency in India’s tribal regions has, over the years, extracted a deadly toll –the All-Nepal Communist Revolutionary Coordination Committee (Marxist-Leninist) was founded in 1975, splitting the pro-Soviet Communist Party of Nepal. The coordination committee laid the foundation of the Communist Party of Nepal (Marxist-Leninist), which led the China-sponsored militancy. The CCP’s objective was to establish a Maoist regime in Nepal, subordinated to China. During more than two decades of Maoist insurgency, well over 19,000 Nepalese were killed, and thousands were jailed and internally displaced, till the Maoists sat down at the negotiating table to talk peace. Finally, they fought elections to come to power through democratic means.

Today, Beijing is no longer interested in exporting ‘revolution’ or Maoism; it is obsessed with exporting all kinds of cheap, made-in-China goods. Yet its geopolitical attitude remains stuck in the Maoist era. ‘Tibet is the palm of China, and Ladakh, Nepal, Sikkim, Bhutan and NEFA [now the state of Arunachal Pradesh in India] are its fingers,’ Mao Zedong once viciously stated. This policy continues.

Interestingly, K.P. Oli, with his faction, the CPN-UML, and Pushpa Kamal Dahal (alias Prachanda, his revolutionary nom de guerre, meaning ‘the fearsome one’, which he no longer uses) of the Communist Party of Nepal (Maoist Centre),had together led the Maoist insurgency. Since tasting state power, the two have been involved in an intense power struggle for the prime minister’s post. The CCP brokered peace between the warring factions and the Left Alliance government won elections in Nepal. In 2018, the CPN-UML and the CPN (Maoist Centre) merged to form the Nepal Communist Party (NCP).However, the internecine bickering between Oli and Dahal never stopped.

The infighting in the ruling NCP culminated in factions of the party, led by former prime ministers Dahal and Madhav Kumar Nepal, joining hands to bring a motion of no-confidence against Oli. Pre-empting the move of his rivals, Oli recommended the dissolution of the House of Representatives in December 2020,and holding fresh elections on April 30 and May 10, which was decreed by President Bidhya Devi Bhandari.

But a Supreme Court constitution bench, headed by Chief Justice Cholendra Shumsher Rana, declared the dissolution of the House to be unconstitutional on February 23.The verdict ordered that the House be reinstated and a meeting of Parliament be held within 13 days. Oli accepted the verdict and called a meeting of Parliament on March 7. But there was more trouble in store for him.

On 7 March this year, the Supreme Court invalidated the Election Commission’s decision to recognise the NCP, formed from the merger of CPN (UML) and CPN (Maoist Centre), and thus effectively reviving them. On March 13, the CPN (Maoist Centre) recalled its ministers, and on May5 withdrew its support for the Oli government. Oli lost the confidence vote on May 10, gaining just 93 of the 232 votes cast in the House.

Oli was reappointed Prime Minister for a third time on May 13 by President Bhandari, because none of the opposition parties laid their claim to form the government. Then, on May 22, she dissolved the 275-member House for a second time on Oli’s recommendation, and announced snap polls for November 12-13.

The final blow came with Oli’s dismissal and Deuba’s appointment as Prime Minister by the Supreme Court on July 12.

If we briefly revisit his two-year-plus rule, Oli’s tenure may appear as nothing short of a theatre of the absurd. While pandering to China’s interests, he made a point of attacking India on the slightest pretext, despite the longstanding cultural and historical relations between the two neighbours.

Oli had exploited the anti-India Nepali nationalist card to come to power. He goaded Delhi regarding certain misunderstandings that had cropped up between India and Nepal. In 2019, he tried to rake up the report of the Eminent Persons’ Group on Nepal-India Relations, which suggested scrapping the 1950 Treaty of Peace and Friendship and regulating the open borders between India and Nepal. India had firmly rejected the report, which had been gathering dust for a year or so.

Last year, threatened by internal party squabbles, he got the Nepalese Parliament to approve a Bill redrawing the country’s map, demarcating the Lipulekh mountain pass, Kalapani and Limpiyadhura, located in India’s Uttarakhand state, as Nepalese territory. Then he came up with the ridiculous idea that the ‘real’ city of Ayodhya lies not in India but in Nepal, and that Hindu deity Lord Ram was born in Thori in southern Nepal.

Oli’s real intention has been to cater to the Chinese, who have invested heavily in Belt and Road projects, the Trans Himalayan Kathmandu-Kyirong rail link, and pipedreams of Nepal accessing seaports through China. Although Nepal and China had signed the Trade and Transit Agreement (TTA) in 2016, giving Nepal access to seven Chinese sea and land ports, it remains a non-starter. ‘Nepal has yet to receive a single consignment from any third country via China under the agreement that the government signed five years ago,’ The Kathmandu Post quoted Purushottam Ojha, a former commerce and industry secretary, as saying.

Another sinister aspect is the China-Pakistan nexus in Nepal. The country has become a haven for organisations like the Tehfuzul Madrassas, which provide safe houses for terrorists. Pakistan’s spy agency, the ISI, and Islamic terrorist organisations such as Lashkar-e-Taiba have been using these madrassas to harbour sleeper cells to target India. Their strategy is to lie low, regroup, procure arms, explosives and funds, and then sneak into India through the open Nepal-India border to carry out subversive and sabotage operations, security experts maintain.

The new government in Nepal will hopefully be more balanced in its approach to its neighbours and restore the centuries-old cordial relations with India, in particular. Heavy investments being made by Chinese companies in Nepal’s state-owned enterprises, often keeping ownership stakes as high as 70 per cent to themselves, should be a warning signal for Kathmandu. And there is enough evidence to show that infrastructure projects implemented by the Chinese are a yawning debt-trap. It is fortunate that Sher Bahadur Deuba, an old hand in politics sworn in as Prime Minister for the fifth time, understands this all too well.