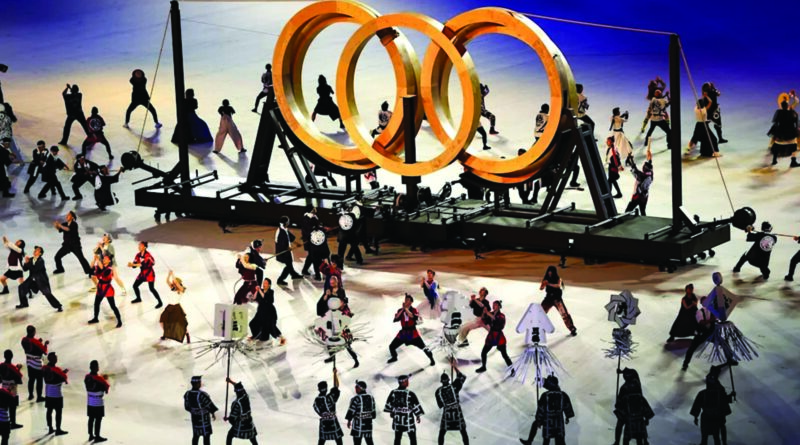 Japan used the opening of the postponed Olympic Games in Tokyo to send messages to a global audience. The tone was sombre and respectful, yet there were also moments of fun and celebration. Bill Emmott considers the takeaways

As the Olympic Games finally began, one year late and amid wide public pressure to cancel over fears the event would become a Covid super-spreader, conflicting emotions competed inside all of us: sadness, that the Games would be marred by empty stadiums; yet also gladness, that these great sporting contests could happen after all; criticism over Japan’s low level of vaccination compared with other rich countries; and acceptance, which has for many been the overriding feeling throughout the pandemic.

The Opening Ceremony on July 23 made up for that emotional confusion by lifting the spirits and giving viewers a warm feeling about Japan. It was a difficult task. After all, in front of only 1,000 spectators in the magnificent new stadium, inevitably the long parade of athletes into the arena felt awkward, since even with the Olympics’ new mantra of ‘togetherness’, such a very human, unchoreographed event was hard to make work on television without cheering crowds to liven it up.

Yet the choreographed televisual spectacle before and after that parade was beautifully done and superbly judged in its tempo and style. It included spectacular fireworks, a performance by Kabuki actors, a tap dancer, some slapstick comedy and an extraordinary airborne drone display that showcased Japan’s remarkable technological virtuosity.

This was underscored by a lovely rendition of Imagine – a song written in 1971 by John Lennon and Yoko Ono, and so neatly symbolising international and intercultural collaboration – performed by singers from several continents, including choirs of children from Tokyo and the parts of Japan which were struck by the Great Eastern Earthquake of 2011.

A search for symbols and meaning

For the host country, giving the world a positive, memorable image of Japan was a principal goal. For Japan, pandemic or not, that was always going to be more difficult in 2021 than it was 57 years ago, when the country hosted the Games for the first time. The fact that the 1964 Tokyo Games was the first fully televised Olympics made it a perfect showcase of Japan’s post-war re-emergence, while also emphasising the country’s hitherto under-appreciated technological advancement.

On that occasion, the Olympic flame was memorably lit by Yoshinori Sakai, a 19-year-old who became popularly known as ‘Atom Boy’, as he had been born on 6 August 1945, within sight of the bomb that was dropped on Hiroshima that day. Sadly, having spent a career in journalism at Fuji TV, he died in 2014 at the age of 69 and so could not witness this year’s event.

It was a nice touch to see that, during the Opening Ceremony of these 2020 Games, athletes carried in wooden rings crafted from wood harvested from trees that were planted as seeds in Hokkaido to mark the 1964 Olympics.

In their early planning, the Japanese organisers said that their goal was that when people look back on the Tokyo 2020 Games in 50 or 100 years’ time, they should be seen to have been ‘a catalyst for change in culture, society and values leading to the realisation of a more sustainable, spiritually richer, happier society’.

The Osaka Olympics in Tokyo

During the run-up to the Games that admirable aim looked like turning into an own-goal, as outrage at insensitive, misogynistic remarks forced the resignations of the chair of the organising committee, Yoshiro Mori, and the creative director Hiroshi Sasaki, and then both a composer and the show director for the opening ceremony had to be removed when evidence emerged of their past insensitive conduct.

Even so, against that troubled backdrop, the choice of Sakai-san’s 2021 successor proved a brilliant triumph. Millions, perhaps billions, will have been delighted and impressed when the famous Japanese-Haitian tennis player Naomi Osaka emerged carrying the Olympic torch to light the flame. No better ‘catalyst for change’ or symbol of ‘togetherness’ could have been chosen.

What would others have done?

To understand the Japanese decision to press ahead despite public opposition, I have tried to ponder what would have happened if the Olympics had been scheduled to be held somewhere else, say in the United States, France or China. Would those host countries have asked for the Games to be cancelled, or would they have gone ahead?

It is impossible to be sure, but it feels highly likely that an American host city would have been gung-ho to go ahead. Rightly or wrongly, the US already seems to be in a ‘post-pandemic’ mindset.

The way in which the Euro football championships were held in several European cities during June, eventually in front of quite full stadiums, suggests Paris, too, would have hosted a pandemic Olympics, perhaps with few or no spectators for most events now that cases are rising there too, as in Japan.

China’s anti-Covid policy has been heavily based on border controls. Even so, it feels likely that the Chinese government would have wanted to show they could put on a memorable Olympics, as indeed they plan for the 2022 Winter Olympics in Beijing next February.

All those countries would, however, have made their decisions with larger shares of their populations vaccinated than in Japan, where on the eve of the opening, just 23.2 per cent of the population had been fully vaccinated.

Eventually, there will be an official film to watch of this year’s Olympic and Paralympic games. I hope that its female director, Naomi Kawase, chosen as a symbol of change, will capture the range of sadness, gladness, criticism, and acceptance that surrounded this epic but extraordinary Tokyo summer spectacle.