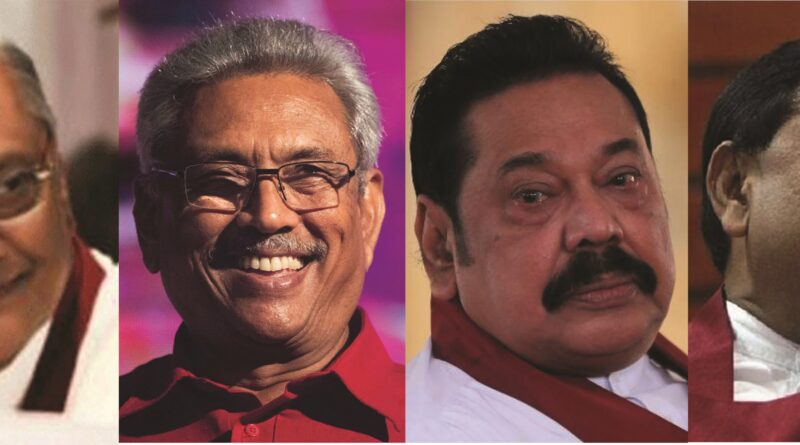 As the Rajapaksas tighten their grip on power, Neville de Silva chronicles the growing economic crisis and public discontent

In times gone by, when Sri Lanka was an island of tranquility and charm, and public transport was sparse, relatives from distant rural areas would come to spend weekends with their urban cousins. The weekends ended but the relatives stayed on and the urbanites showed no disaffection.

How times have changed! Today the word ‘relatives’ has been replaced by ‘politicians’ and the longer they stay around, the more they are despised by a public increasingly intolerant of the abject rottenness of today’s political class.

Last month, this old story of visiting relatives came alive in social exchanges and discourse, quickly churned out as satirical verse and song set to a lively rhythm called baila.

While songs satirising political abuse of power, corruption and policy failure are a thriving industry in these times of technological sophistication, what brought about the resurrection of tales from the past was a recent announcement by President Gotabaya Rajapaksa that took the country by surprise.

During a dialogue with top media executives on July 19, he said – almost off-handedly, it seemed – that he had more than three years to fulfil his policy promises, as he had eight years in total.

Though not explicitly stated, these extra five years are a tangential reference to a second five-year term as president. This was confirmed by a tweet from the presidential secretariat, so there is no question of a misunderstanding or misrepresentation.

Emptying foreign reserves is not the Gotabaya government’s only problem

What caught the country by surprise was that this represented a complete reversal of what Gotabaya Rajapaksa said during his presidential campaign in 2019. As the media reminded the public, he declared he would not serve more than one five-year term as president. Then, last year he repeated that there was time enough to implement what many observers regarded as ambitious pledges and plans.

‘Another U-turn,’ Jamila Husain, a deputy editor of Sri Lanka’s Daily Mirror, was quoted as saying.

Certain detractors call today’s government ‘family rule’, some call it an ‘oligarchy’ and still others select worse names. Only last month President Rajapaksa firmed up the label of family rule when he appointed to the cabinet the youngest sibling Basil, 70, as finance minister with wide powers, taking the portfolio away from the elder brother, Prime Minister Mahinda, who served two terms previously as president but lost at his third shy at it in 2015. Mahinda was made minister of economic policies and plan implementation, with some other portfolios, including Buddhist and religious affairs and cultural affairs, added on.

This move brought the fourth Rajapaksa brother into the cabinet. Eldest brother Chamal continues to hold the Irrigation portfolio and is state minister of national security. Also a cabinet minister is Mahinda’s eldest son Namal, minister of sports and youth.

Basil worked energetically to build a new political party after brother Mahinda broke away a few years earlier from the Sri Lanka Freedom Party (SLFP), which their father DA Rajapaksa helped SWRD Bandaranaike launch in 1951. Bandaranaike, later prime minister, was assassinated in 1959 by a Buddhist monk.

With the Gotabaya government’s public popularity dipping badly, as its rag-tag team of professional and military supporters have become infused into the civil administration and hold key positions, it could do little to rescue the country after the administration’s ill-conceived and shortsighted economic, monetary and social policies dragged Sri Lanka, already overwhelmed by the pandemic, to the edge of the abyss.

It now teeters there dangerously. Dr Nimal Sanderatne, economist, former Central Banker and professor at Peradeniya University’s Post Graduate Institute of Agriculture, and an economic analyst for the respected Sunday Times, warned: ‘The economic crises facing the country are multi-dimensional. The country is heading towards a severe crisis in external finances. External reserves are perilously low and foreign debt repayments and import requirements are eroding them further.’

If this was all, a telephone call to Chinese President Xi Jinping might solve the issue. He is, after all, reported to have told Colombo’s leaders that any time they want money, they should drop him a line and Sri Lanka, being such a good friend, could pay it back at its convenience.

Whether this is apocryphal or a part of the debt trap that some people sniff at, one can only speculate. What is clear is that when Sri Lanka’s much loved Chinese Communist Party (CCP) was celebrating its centenary, the Central Bank minted gold coins in honour of everything it had done.

But emptying foreign reserves is not the Gotabaya government’s only problem. It has no money, as its foolhardy tax cuts in the first months in office have left it scraping the bottom of the barrels to meet local expenditure.

As some critics put it, the Central Bank is printing money as though printing machines are about to go out of fashion.

Meanwhile, there is social ferment as teachers’ and nurses’ trade unions, student bodies from universities and elsewhere, as well as farmers, hold public protests against failed government policies, the clamping down of fundamental rights and attempts to undermine Sri Lanka’s free education system.

Free education until the end of university studies was introduced from the early 1940s, years before the country gained independence in 1948. It was mainly for the benefit of thousands of underprivileged youngsters in rural parts of the country, and it eventually raised the country’s literacy levels to around 95 per cent, one of Asia’s highest.

Now, perhaps pressed by the military, Gotabaya Rajapaksa is trying to upgrade a military academy into the Kotelawala National Defence University (KNDU), clearing the way for children of the new moneyed class to gain degrees at the expense of unprivileged youth, who have to pass public examinations to gain entrance to the country’s institutions of higher learning.

Short circuiting the free education system, fee-paying students with degrees out of the KNDU will then be able to fill jobs in the state sector, again at the expense of the underprivileged who have little or no political influence and financial backing.

‘Throughout the State, not only where the “over two dozen” (The Hindu) ex-military brass serve, there is hardly a purely civilian authority, command-and-control structure or sphere of influence anymore. China’s Military-Civil Fusion (MCF) doctrine is being applied far beyond the limits it operates within in China. In President Gotabaya’s Sri Lanka, MCF is system-wide,’ wrote Dr Dayan Jayatilleka, political scientist and former ambassador, in the Daily Finance Times.

What President Rajapaksa did not disclose when he mentioned the eight years still available to him to put right issues is that he must first clear the 2024 presidential election. If ‘Basil Power’ is not sufficient to clear the decks of the problems that now haunt the country, including a macho public face in dealing with foreign policy confrontations, and resurrect the Rajapaksa political fortunes, what will happen?

Is there a Plan B, another route to continue in political power?