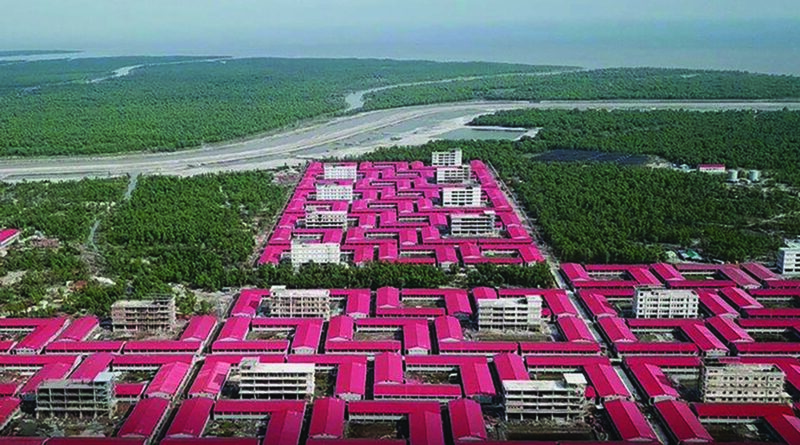 Bangladesh’s leaders are developing a new approach to helping the hundreds of thousands of Rohingyas from Myanmar stranded in the world’s largest refugee camp. Duncan Bartlett reports

Psychologists have identified a problem which affects people who are repeatedly exposed to the suffering of others. They call it compassion fatigue.

They also use the term ‘secondary traumatic stress’ to describe the painful situation when empathy drains away, to be replaced by frustration and resultant feelings of guilt. Those who are most empathetic are, ironically, most at risk.

Is it possible that compassion fatigue is hardening Bangladesh’s attitude towards the Rohingya refugees? Have people stopped caring?

Some recent reports in the international media suggest that the country’s government is tired and frustrated by the Rohingyas and plans to hide them away in a remote location in order to forget about their plight.

However, my reading of the situation is quite different. I believe that Bangladesh’s leaders remain compassionate. But now that the early emotions of shock have subsided, a new and more sophisticated form of compassion is developing, which includes a fresh approach to problem-solving. There is now a more robust plan to help the Rohingyas, which requires international support.

Compassionate leadership goes beyond sympathy. It requires courage to challenge systems which create trauma and suffering. In the context of Bangladesh, it also requires balance. The troubles facing the Rohingya refugees cannot be allowed to spill over into other disadvantaged communities.

When the Rohingya originally flooded across the border into Bangladesh in 2017, following a situation described by the United Nations as a ‘textbook example of ethnic cleansing’, Prime Minister Sheikh Hasina was praised by the Wall Street Journal as ‘the face of compassion’. She was deeply moved by the persecution of the Rohingya Muslims at the hands of the Burmese military. Bangladesh opened its borders to huge numbers of displaced people, creating camps for them in Cox’s Bazar, which is now home to the world’s largest refugee settlement.

It is estimated that more than a million refugees (formally referred to as Forcibly Displaced Myanmar Nations) have been given shelter in Bangladesh under the leadership of Sheik Hasina. This is despite the fact that Bangladesh is a developing country with a huge population of 170 million.

The prime minister said the Rohingya crisis struck a chord with her because of the parallels with her own nation’s violent birth in 1971, following the war of independence. ‘What the Pakistani military did with us, with our people, was the same thing,’ she said. ‘We know what suffering means.’

Bangladesh spends an estimated $1.2 billion a year supporting the refugees

Four years on, she has not forgotten. But her approach, as well as that of her senior ministers, has moved on.

In a recent speech to a conference on international security in Moscow, the prime minister explained several key points. Firstly, she made clear that it is the responsibility of the global community to help the Rohingyas: Bangladesh cannot resolve the crisis alone. Secondly, Bangladesh is offering the Rohingyas a temporary, not a permanent, home. And thirdly, the refugee crisis is creating a mounting security threat to Bangladesh and to the region.

‘We’ve sheltered them on humanitarian grounds, but such a huge population can’t be accommodated for an indefinite period. I request the world community to assist us in dignified and peaceful repatriation of the Rohingyas,’ said Sheikh Hasina.

Aside from anything else, there is an economic issue to consider. Bangladesh spends an estimated $1.2 billion a year supporting the refugees and the cost keeps rising as the population in the Cox’s Bazar camps increases. Some countries have been generous with their help, especially the United States. However, the flow of assistance is decreasing, and the managers of the camps reported a shortfall in their budget of 27 per cent for 2020.

Given that other countries are reluctant to house the refugees, Bangladesh must therefore press on with alternative arrangements. As well as the cost, the overcrowded camps in Cox’s Bazar are affected by crime and disease and the surrounding areas are being adverselyimpacted, especially in terms of the environment.

Bangladesh is now offering new homes to the Rohingya refugees on an island called Bhasan Char. Some 20,000 people have been relocated thus far, with more to follow.

The Bhasan Char camps are not luxurious. However, nor are they akin to prisons, as some foreign press reports have suggested. The goal is modest: to offer a safe environment, basic education and medical support to the residents until they return to their homeland.

Bangladesh’s foreign minister, Dr AK Abdul Momen, is passionate about the fate of the Rohingyas. He is a frequent visitor to the camps and has listened to their residents’ stories, which he has gone on to share at many international forums, including the United Nations.

His words have been influential in the United States. Under Joe Biden, the US has said it will accept more refugees from abroad. The Americans even seem to be working towards a deal to take in some of the Rohingyas. Given the sensitivity of this issue, Bangladesh’s frustration at some of the negative press coverage is understandable.

The Bangladesh foreign ministry claims that a section of the international media and civil society organisations are campaigning against Bhasan Char and Rohingya relocation with ‘distorted information misrepresenting the facts’.

‘Such a campaign will undermine the magnanimous humanitarian gestures and the sincere efforts of Bangladesh. Excessive focus on temporary arrangements and undue criticism will only shift the focus from the permanent solution, which lies in repatriation and reintegration of Rohingyas in Myanmar,’ says the ministry.

The hope of return

There is a glimmer of hope on the horizon. Myanmar’s so-called government-in-exile has changed its approach from the previous civilian government and indicated that it will now recognise and welcome home the Rohingyas.

The National Unity Government (NUG), which was formed in the spring of this year, claims it fully intends to support Rohingya repatriation and will cooperate with the International Court of Justice to determine whether acts of genocide were committed against the Rohingya minority.

However, the problem is that the National Unity Government holds no power. That remains in the hands of the junta in Myanmar, led by military General Min Aung Hlaing. The United Nations continues to press the army to respect international opinion and return the country to democracy, but the message is falling on deaf ears. Until the situation changes, the chances of the Rohingya returning safely to their homes seem desperately remote.

These are difficult times for the region and the traumas are exacerbated by the behaviour of the Myanmar junta. Given the circumstances, the Bangladesh government is determined to deliver a better long-term outcome for the refugees than their present situation, trapped in Cox’s Bazar.

Like New Zealand’s prime minister Jacinda Ardern, Sheikh Hasina of Bangladesh has established her credentials as a compassionate leader. This is the opportunity to go beyond empathy, show resilience and draw on international support to find sustainable solutions.