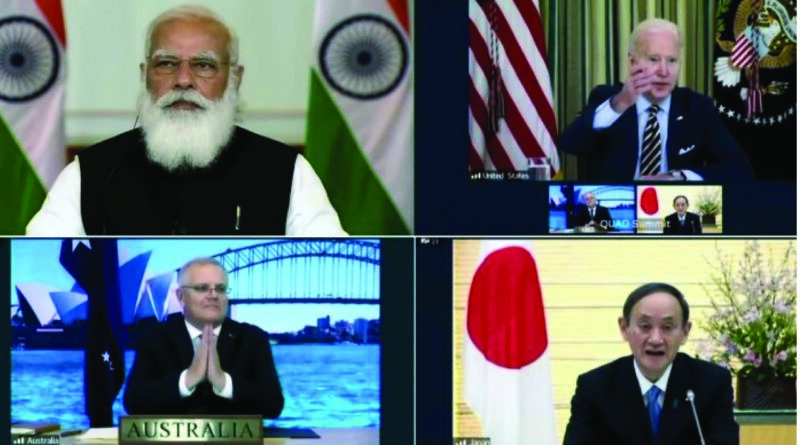 Sure footing in uncertain times

As the Covid pandemic rages on and threats intensify across the Indian and Pacific Oceans, the Quad partners and other nations focus on cooperation. G. Parthasarathy reports

Like elsewhere the world, the primary focus of attention for the people of India today remains the corona virus situation.  To date, there have been 31.3 million cases of Covid-19 infection in the country, and 419,000 deaths from the virus. While this may seem relatively small for a country with a population of 1.36 billion, the sheer numbers of people requiring testing and treatment have still been mind-boggling. Medical institutions face huge challenges, with the growing requirements for hospital beds, oxygen cylinders and other equipment and facilities. This problem has been made more complex by the continuous need for close consultations between New Delhi and the state governments, involving regular meetings between the prime minister and state chief ministers.

While New Delhi was initially liberal in its exports of vaccines to developing countries, it soon found that domestic demand was rising rapidly. It became unable to help countries like Myanmar, Sri Lanka and Bangladesh, which remain in dire need of vaccines. India’s experience has been interesting, as it has developed indigenous vaccines, which have been helpful. The most widely used one in the country, produced by the Serum Institute of India, remains the AstraZeneca, with an annual production in India of 750 million vaccines. Bharat Biotech, in turn, has set an annual target of 550 million doses of the indigenously developed Covaxin, and Russia’s Sputnik vaccine is set to commence production in India. But the real spurt is expected when the US Johnson & Johnson is ready to commence production in India, with an envisaged capacity of 2 billion vaccines annually.

India’s present plans seek to ensure that by December 2022, it will have the capacity to significantly meet the needs of its immediate neighbours. The Johnson & Johnson project was agreed to during a virtual Quad summit meeting on March 12 this year. The establishment of the Quad – comprising the US, Japan, India and Australia – has also involved closer military links and consultations across the Indian and Pacific Oceans, accompanied by regular naval exercises. There have also been periodical naval exercises with France, and naval exercises with the UK in the Bay of Bengal have commenced, which enhances Britain’s presence in the Indian and Pacific Oceans. India is also focusing increasingly on developments in Afghanistan, as concerns remain of a Taliban takeover following the US withdrawal from the country.

Against the backdrop of the pandemic, the main security challenges that India faces today are on its border with China, in Ladakh. The last year saw some of the most intensive military activity in Ladakh, involving shootouts, face-to-face confrontation and casualties on both sides. The dialogue between military commanders continued amidst the conflict. There has been a regular feature recently, known as ‘salami slicing’ of Indian territory by China, in the snowy mountains of Ladakh. But, after serious negotiations between the two countries’ military commanders and regular meetings between their foreign ministers, the two sides agreed on a plan for mutual withdrawal to positions held in January 2020, before tensions escalated.

In their March 12 Summit Declaration, titled ‘The Spirit of the Quad’, the leaders of the US, India, Japan and Australia focused on measures of cooperation in dealing with Covid-19. They also pledged to promote a ‘free, open, rules-based order, rooted in International Law, to promote security and prosperity, and counter threats in the Indo-Pacific, and beyond’. And they noted: ‘We support the rule of law, freedom of navigation, and overflight, peaceful resolution of disputes, democratic values, and territorial integrity.’ Maritime cooperation in the Quad has grown steadily in recent years, and it remains active after the summit meeting.

The Quad has been a logical outcome of growing Chinese assertiveness across the Pacific and Indian Oceans for over a decade, now. China has maritime and land boundary disputes with 18 countries in its Indo-Pacific neighbourhood. These countries include ASEAN members Vietnam, the Philippines, Indonesia, Malaysia and Brunei, as well as Japan, Taiwan, South Korea, North Korea and Russia. China’s boundary claims have no basis in International Law; Beijing has also violated International Law by refusing to abide by the order of an International Tribunal, which rejected its territorial claims on the Philippines. China’s land and maritime boundary disputes with Vietnam led to a vicious conflict in 1970-1982. Beijing has also made unjustifiable claims on Vietnamese territory in the Paracel Islands, parts of the South China Sea, and the Spratly Islands. The two neighbours fought a bloody conflict, commencing in 1979, with huge casualties on both sides.

China’s continuing and growing territorial claims in its neighbourhood have been accompanied by a quest for bases across the Indian Ocean. China already has base facilities for its navy in the port of Gwadar in Pakistan. It has virtually taken over control of the Port of Hambantota in Sri Lanka by drawing Sri Lanka into a ‘debt trap’. This resulted from Colombo’s inability to repay debts for construction projects undertaken by China, including Hambantota. China also has agreements for access of its navy to ports in Oman and Djibouti. China’s interest in the Indian Ocean region flows largely from its interest in the oil and mineral resources there.

New Delhi and Beijing continue to discuss moves to reduce tensions on their borders at the levels of foreign ministers and military commanders. There are also moves to discuss the impact of Chinese maritime policies with regional organisations like ASEAN. While it is unlikely that we will find solutions to these territorial issues at regional levels, the effort to persuade China to settle its maritime boundaries on the basis of International Law must continue vigorously.

In the meantime, the Royal Navy’s joint exercises with the Indian navy in the Bay of Bengal in July was a major exercise, which involved a British aircraft carrier and F-35 B ‘stealth’ fighters. The UK has thus joined France in the growing maritime cooperation with the Quad across the Indian and Pacific Oceans.