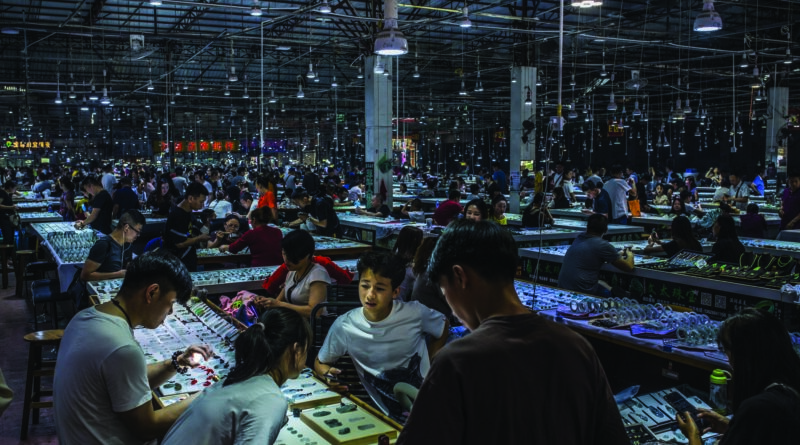 The extraction and export of precious stones, especially jade, in Kachin State near the Myanmar-China border, is one of Myanmar’s major industries, operating near the boundary of what is legal. A new report by Global Witness suggests jade mining is sustaining the military government’s power. Nicholas Nugent has read it.

If you were looking for a present-day equivalent to America’s Wild West, where the law of the gun prevailed, a good candidate would be the Myanmar-China border. Despite both countries having authoritarian governments, the frontier is notorious for smuggling, drug-trafficking, prostitution and gambling – as if neither country is in control of its borderlands.

Illicit drugs and smuggled jade are bartered for weapons which keep Myanmar’s ethnic army organisations in business, and most of South-East Asia’s production of methamphetamines, or ‘ice’, originates from northern Myanmar.

Add to this the environmental degradation associated with jade mining and you have a 21stcentury ‘Wild East’. In a comprehensive report focussing on the largest jade mine in the world, at Hpakant in Kachin state, the London-based campaigning organisation Global Witness accuses Myanmar’s army – known as the Tatmadaw – of benefiting from the trade in jade.

Much of Myanmar’s jade production is unlicensed and therefore illegal, so its true value – estimated at up to US $30 billion per annum – does not appear in official statistics. An earlier Global Witness report (in 2015) concluded that ‘the jade industry was secretly controlled by networks of military elites, drug lords and crony companies with their roots in the darkest days of military junta rule’.

The new report (June 2021) charts how the National League for Democracy (NLD) government that came to power in 2015 tried to reform the jade industry by introducing protection for yemase, freelance miners working for bosses who may or may not have a licence. They aimed to cut down on the smuggling of jade to nearby China, which was costing hundreds of millions of dollars in lost taxes.

Towards these ends Myanmar’s parliament, the Pyidaungsu Hluttaw, passed the Myanmar Gemstone Law in 2019. By suspending issuance of mining licences to individuals and small enterprises, the NLD gave greater control to major players in the mining business, says the report.

It names two state organisations that have most benefited: the Myanmar Gems Enterprise (MGE), a regulatory body that also plays a role in mining and marketing, and which the report says is dominated by former Tatmadaw officers; and the army-owned Myanmar Economic Holdings Limited (MEHL), which it says acquired over half its licences in a ‘frantic resource grab’ during the months before the NLD took power. Through its several subsidiaries, MEHL is the single largest holder of jade mining permits.

Since the Tatmadaw ousted the NLD government and seized power in February, the United States, United Kingdom and European Union have imposed sanctions on MEHL, as well as on coup leader General Min Aung Hlaing and other senior officers.

The report cites instances of local army officers taking advantage of the suspension of national licencing by soliciting bribes to allow mining to continue. The positions of Northern Commander and chief of Hpakant Division 101 are notorious for their ability to rake in large bribes.

It also details the role of ethnic army organisations, or EAOs, long at war with the central government for greater autonomy in their states. Some EAOs in Kachin State are cooperating with the Tatmadaw, their traditional enemy, in the joint interests of making money from jade. In addition, the report mentions the Kachin Independence Army (KIA), the Arakan Army (AA – based in Rakhine State but with strong links to the KIA) and the United Wa State Army (USWA), all military wings of their respective independence organisations.

Revenue from jade has traditionally funded such ethnically-based armies in their war against the army and central government. ‘There is so much money to be made through jade mining that even groups engaged in active armed conflict [against each other], such as the Tatmadaw and the KIA, find ways to cooperate to extract revenue from the middle of conflict areas,’ says Global Witness.

The report names businessmen, former army officers and their family members, whom it says have benefited from the current ‘free for all’ in the mining sector. These include Aung Pyae Sone, the son of senior general Min Aung Hlaing, the coup leader now heading the State Administration Council – effectively head of government. Min Aung Hlaing and Myanmar’s former military dictator, Than Shwe, are said to have received significant income from their shareholdings in jade companies.

Global Witness, which claims to challenge abuses of power to protect human rights and secure the future of the planet, clearly has its work cut out with the jade industry in Myanmar. Degradation of the soil through mining was blamed for landslides in April 2019 and July 2020, which between them killed around 250 mining labourers, or yemase.

Most of Myanmar’s jade ends up in China via a road connecting Kachin State to Yunnan Province, one of few crossing points along the 2,129-km frontier between the two countries. The Chinese city of Ruili on the border is a major marketing centre for precious stones brought from Myanmar. Lately, an outbreak of COVID-19 at Ruili was blamed on travellers coming across the border from Myanmar. COVID apart, China seems content, for economic reasons, to deal with Myanmar’s military government and has not imposed sanctions.

Global Witness believes revenue from jade is now sustaining the military government in power. It sees February’s coup as an attempt by the army to retain hold of its vested interests: ‘The threat to the military’s protected role in Myanmar’s politics represented by the NLD’s landslide re-election in [November] 2020… played a part in the Tatmadaw’s decision to reverse Myanmar’s democratic transition, arrest the NLD’s entire leadership and plunge the country into crisis.’

Myanmar’s former ambassador in London, who resigned after the coup, told this reporter that another reason was that the army leader ‘hates Aung San Suu Kyi’.

The way jade mining funds illegal armies in Myanmar is compared with how illicitly mined diamonds supported anti-government rebel movements in African nations like Angola and Sierra Leone. The United Nations dubbed these ‘blood diamonds’ for the loss of life that resulted.

The implications of Global Witness’s report on Myanmar seems to be that if the Tatmadaw loses control of jade mining at Hpakant, it risks losing control of the country.

Nicholas Nugent reported from Burma for the BBC during an earlier military uprising. He is co-author of CultureSmart! Myanmar