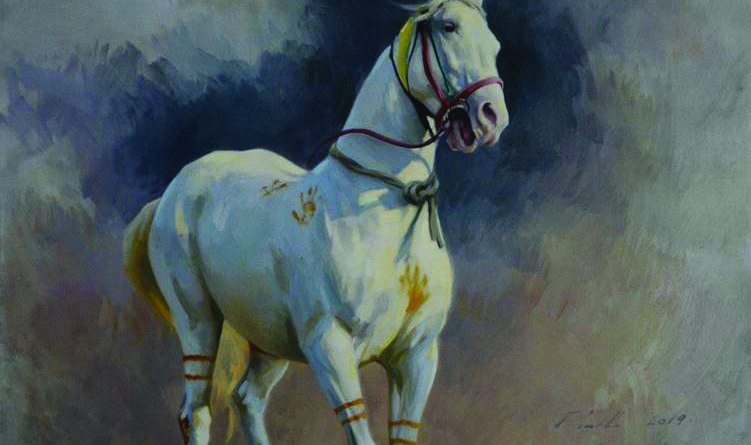 A forthcoming exhibition by  Marcus Hodge, inspired by his travels in India and Spain, reflects the artist’s restive spirit as it explores the enchanting realm of the horse

India – its landscape, culture, spiritual essence and ancient traditions –provided the inspiration for British artist Marcus Hodge’s inaugural solo exhibition in 2001, and for the many others that followed.

Today, it continues to be a powerful element in his art as he turns to all things equine for a forthcoming October show at London’s Osborne Gallery.

Born in 1966, Hodge first travelled to India in 2000. It was the catalyst for an intense and enduring fascination with the country, where his grandparents and great grandparents spent many years, either in the services or commerce. His immediate family, too, have strong links with India, having worked with a home for girls in Jaipur for 20 years.

Hodge originally made his name as a portrait painter, studying Old Master techniques at the Escuela Libre Del Mediterraneo in Palma, and becoming only the third person in the school’s history to be invited to remain as a tutor. In his constantly evolving work he explores a variety of methods, from the figurative to the quasi-abstract.

A restless soul who finds expression in painting, drawing and sculpture, his pieces are conceived more instinctively than intellectually, leading William Packer, the Financial Times’art critic, to muse: ‘He goes off into the wilderness, on which to register, with remarkable freedom and spontaneity, whatever takes his eye.’

To prepare for his October exhibition, Hodge travelled for two years, especially in India and Spain, recording equestrian life, its fetes and gatherings. A favourite location was the Umaid Bhawan Palace in Jodhpur, heartland of the indigenous Marwari horse.

The show collates paintings inspired by several trips as Hodge delves into the equine world, from the Marwari horses of Rajasthan to the thorough breds and Arab mounts of the Middle East and the international circus horses of Monaco. Its unifying theme is the celebration of festivals and religious gatherings, in which horses and other animals play a part, or look on as part of the spectacle.

Among the places depicted is Pushkar in Rajasthan, which hosts an annual camel fair. Every year, this small town pulsates with life as thousands of visitors congregate. Tribal families from villages in the Thar Desert arrive in camel trains with horses and cattle to trade, exchange news and enjoy one of India’s most vibrant carnivals.

The artist himself describes the tiny streets‘packed with religious pilgrims and visitors, a riot of colour and noise’. But, should one venture a little way out into the desert, the atmosphere changes to ‘an air of quiet, deliberate purpose’ amid ‘a sea of tents and campfires’ as the all-important trading is conducted.

‘Some of the finest Marwari horses are to be seen here, racing up and down between the tents,’ recalls Hodge. ‘But everywhere there are quieter, more intimate scenes unfolding.  Families gathered around fires, preparing meals; the horses sharing the same space.’Even the smaller, more modest-looking horses are beautiful, and ‘treated with such warmth and affection’ as they‘seem to play a central role in family life’.