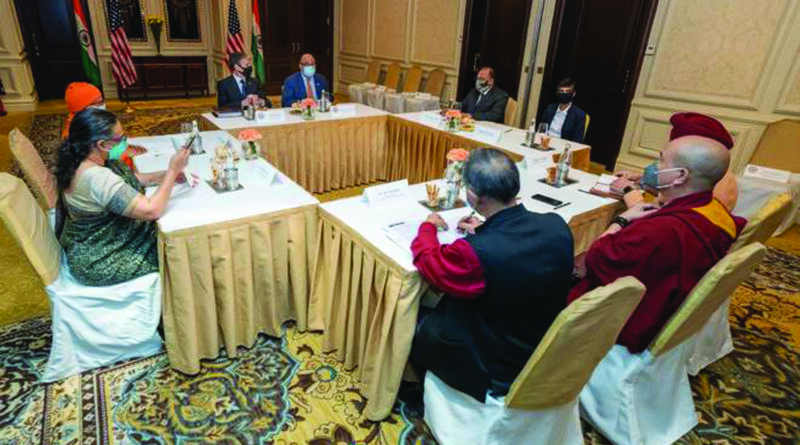 A meeting in Delhi between the US Secretary of State and a representative of the Dalai Lama has angered China, which regards it as a counter to President Xi’s recent Tibet visit.  Amit Agnihotri reports

Locked in a new cold war with China, the US knows exactly where to prick the Asian Dragon.

Over the past years, US-China rivalry has become multi-dimensional,from trade issues to the autonomy of Taiwan and Hong Kong, leading to the formation of the four-nation Quad in 2020 to counter the Asian Dragon’s expansionism in the South China Sea and the Indo-Pacific region.

Probing the origin of the deadly coronavirus, which surfaced in China’s Wuhan city in late 2019 and then spread across the world, causing devastation, has become the latest flashpoint in the strained Sino-US relationship.

Against this backdrop, US Secretary of State Antony Blinken choosing to meet Ngodup Dongchung, the representative of the Tibetan spiritual leader, the Dalai Lama, in New Delhi on July 28, signalled that the Biden administration is in no mood to give China a free run.

Besides Dongchung, who represents the Central Tibetan Administration, or government-in-exile, Blinken also met Geshe Dorji Damdul, director of Tibet House in New Delhi, along with some civil society members.

As expected, the meetings infuriated Beijing, which warned the US not to interfere in its internal affairs.

The Asian Dragon sees any reference to the Dalai Lama as an international attempt to flag the issue of human rights violations and genuine autonomy in Tibet, which China invaded in 1950 and continues to rule with an iron fist.

Over the past seven decades, Beijing deployed the People’s Liberation Army to crush any signs of dissent in Tibet. Simultaneously, it pumped in billions of dollars to develop the plateau with the aim of winning over the locals and resettling the Han Chinese there.

However, all the money and military might of the Asian Dragon failed to crush the Tibetan cultural identity, which strongly identifies with Tibetan Buddhism and places the Dalai Lama on the highest pedestal.

Much to Beijing’s dismay, the Tibetans, who constitute 90 percent of the local population, still yearn for freedom, anathema for the ruling Chinese Communist Party.

No wonder, then, that Beijing despises the Dalai Lama’s influence over the hearts and minds of the Tibetans and accuses the globally respected monk of being a separatist, simply because he demands genuine autonomy for his community within the communist yoke.

A look at developments over the past year shows that Blinken’s meeting with the Dalai Lama’s representative was part of a renewed US Tibet policy.

In November 2020, Lobsang Sangay, the former head of the Tibetan government-in-exile, visited the White House, the first such visit in six decades, and met with Robert Destro, the special US coordinator for Tibet.

A month later, in December, outgoing US President Donald Trump signed the Tibet Policy and Support Act (TPSA) into law. His successor Joe Biden continued with the legislation.

The TPSA recognises the absolute right of the Tibetan people to choose the Dalai Lama’s successor, and allows the US to open a consulate in Lhasa, the capital of Tibet, before China can start more consulates in the US.

Blinken’s meeting with Dongchung is the most significant US contact with the Tibetan leadership since the Dalai Lama met former President Barack Obama in Washington in 2016.

The visit of the Biden administration’s top official to India, within months of the new President taking over, marked the growing security convergence between the US and India, which had a bloody border row with China in eastern Ladakh in 2020.And Blinken choosing to reprimand Beijing over Tibet from Indian soil sent a clear messageto the Asian Dragon.

Although Beijing has been able to change the face of Tibet by developing a massive network of infrastructure, China is still anxious over a future event that holds huge significance for the Tibetans.

The 14th Dalai Lama turned 86 on July 6 and will plan his succession in the coming years. Usually, the successor is named by the Dalai Lama himself, or a group of monks later identify the person through subtle hints left behind by the spiritual leader.

Earlier, China had interfered in the appointment of the 11th Panchen Lama (the second most important spiritual leader) in 1995 by rejecting the Dalai Lama’s nominee Gedhun Choekyi Nyima and declaring its own candidate Gyaltsen Norbu.

Nyima was abducted by Chinese authorities and has not been seen since. Last year, then US Secretary of State Mike Pompeo demanded that China make Nyima’s whereabouts public, after Beijing said he was at a ‘safe location’.

Beijing fears that western powers (for which read ‘the US’) will meddle in the succession of the Dalai Lama and deny the Asian Dragon a chance to nominate its proxy as the next top spiritual leader of the Tibetans.

This is where the TPSA assumes significance. The law stipulates that any interference in the process of appointing the Dalai Lama’s successor by any Chinese official would invite US sanctions against the person.

Tibet, which shares a long border with India, Nepal and Bhutan, has a special place in Chinese President Xi Jinping’s renewed plans to secure the country’s borders.

In this light, Xi’s July 27 visit to Nyingchi, just 15 km from the Indian border state of Arunachal Pradesh, and his utterances there, provide clear hints that the Chinese President is pursuing an aggressive assimilation policy in Tibet.

Xi, who travelled to Tibet for the first time as President and coincided his visit with the 70th anniversary of the Chinese takeover, asked his officials to make Tibetan Buddhism grow in sync with China’s socialist system and ensure that the borders were safe.

The recently launched Nyingchi-Lhasa bullet train, aimed at facilitating fast movement of troops to the border areas, and the plan to develop model villages along the border with India, are both pointers towards the security dimension gaining prominence in Xi’s Tibet policy.

The history of Chinese aggression in Tibet goes back to 1950 when the Asian Dragon invaded the region, terming the move a ‘peaceful liberation’.

The Dalai Lama, then 23, fled Tibet after a failed uprising against Chinese rule in 1959 and crossed over to India from Tawang in Arunachal Pradesh.India gave shelter to the Dalai Lama, along with thousands of refugees, and allowed Tibetans to run their government-in-exile from Dharamsala in Himachal Pradesh.

Today, India is home to around 80,000 Tibetans, while over 1.5 lakh members of the community are spread across the US and Europe.

While India recognised Tibet as part of China in 2003, it has also allowed the Dalai Lama to visit Tawang several times in the past, rejecting Beijing’s claim over the territory.

During the peak of the eastern Ladakh border face-off with China last year, New Delhi deployed the Special Frontier Force, raised entirely from Tibetan refugees – a strong and unambiguous statement.