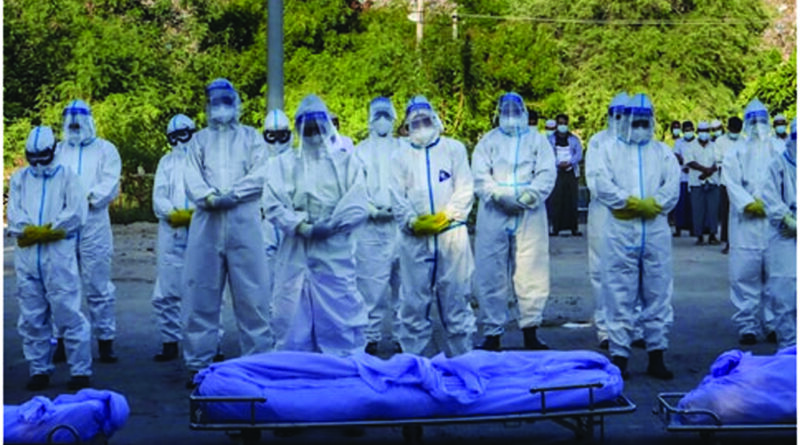 Sudha Ramachandran shines a light on Myanmar’s spiralling human rights disaster, as the junta weaponises the Covid pandemic and deploys vital supplies as a military asset

Seven months on from the Tatmadaw’s coup in Myanmar to overthrow the elected National League for Democracy (NLD) government, the situation in the country has grown exceedingly complex.

‘In just over four months, Myanmar has gone from being a fragile democracy to a human rights catastrophe. In addition to the loss of life, people are suffering from severe impacts on the [sic] social and economic rights,’United Nations High Commissioner for Human Rights Michelle Bachelet observed in June.

What began as a political crisis in February has morphed into a ‘multi-dimensional human rights catastrophe’, Bachelet pointed out a month later.

Since the coup, the Tatmadaw has killed nearly 900 people in crackdowns on civilian protestors. Many times that number have been injured. Some 200,000 people are said to have been displaced by the junta’s aerial bombing of villages and sweeping military operations across the country. Hundreds of NLD leaders and activists, including Aung San Suu Kyi, continue to languish in prison.

Adding to the political unrest and economic crisis is the problem of hunger. In April, the World Food Programme estimated that the number of people facing hunger could more than double, from 2.8 million before the coup to 6.2 million in the coming months.

Thailand, in common with Myanmar’s other neighbours and fellow ASEAN member-states, has not spoken out against the coup

Meanwhile, the Covid-19 pandemic is sweeping through the country. In mid-August Myanmar recorded around 350,000 cases. The country has registered over 12, 667 deaths as of August 13, among the highest per capital in the world. Yet these figures are widely believed to be underestimations.

The positivity rate – that is, the percentage of tests that return positive results – has been over 35 per cent since mid-July, indicating uncontrolled transmission of the virus.

Particularly at risk of infection is the country’s ‘prison population, including the thousands of political prisoners who have been arbitrarily detained since the coup’, UN Special Rapporteur on the situation of human rights in Myanmar, Tom Andrews, said recently. ‘Prisoners, particularly those with underlying conditions, could see their detention become a death sentence,’ he said.

Myanmar’s healthcare system, which was decrepit at the best of times, has now come under severe pressure, with the junta jailing hundreds of doctors for participating in the protests. And now, with coronavirus infections surging, hospital care has all but collapsed.

Alarmingly, even as the third Covid-19 wave sweeps through Myanmar, the junta has found in the pandemic another deadly weapon to use against its opponents.

The Tatmadaw has centralised control over all medical supplies – medicines, vaccines and oxygen cylinders, meant for the people – into its own hands. According to an article in The Irrawaddy, rather than ensure that these supplies reach Covid-19 hotspots and are used to treat all people infected by the coronavirus or vulnerable to infection, ‘the junta is deploying’ medical supplies ‘in the way the generals would deploy any other military asset: to gain advantage over adversaries, to cut access to its main opponents and to use its own resources to blackmail or lure passive opponents and turn them into passive co-operators’.

The junta’s strategic denial of Covid-19 vaccines is most apparent in the western Rakhine state, where health officials have begun vaccinating Buddhist monks, the elderly and frontline workers. However, they are said to have issued ‘orders’ to those vaccinating people in the state to not vaccinate Rohingya Muslims.

The Rohingya have been the target of successive regimes in Myanmar, whether military or civilian. Not only are they discriminated against, they have also been denied citizenship.

In 2017, when the Tatmadaw carried out military operations against Rohingya Muslims,tens of thousands were forced to flee the country.Those who remained in Myanmar live in overcrowded camps and are therefore highly susceptible to coronavirus infection. Despite this, they will not be vaccinated, at least for now.

With the junta restricting medicines, oxygen and vaccines – even to its supporters – and denying them to its critics, community organisations,especially in Myanmar’s borderland,are rallying to support the masses in fighting the pandemic.

In the meantime, the National Unity Government (NUG), as Myanmar’s government-in-exile is known, has set up a Covid-19 Task Force to help control the spread of the virus and coordinate procurement of vaccines, medicines and equipment from international organisations. It is working with local health groups,especially in the country’s ethnic areas.

However, no country has yet extended diplomatic recognition to the NUG, and hence its access to medical aid remains limited.

During a recent visit to Thailand, US ambassador to the United Nations, Linda Thomas-Greenfield, announced $50 million in humanitarian aid to Myanmar, alongside $5 million in Covid-19 aid for Thailand. The aid would be channelled through its international and non-governmental organisation partners, Thomas-Greenfield said.

Since the US is not engaging with the junta, this aid is likely to be sent to NGOs working with displaced populations living in Thailand – meaning that this medical and other aid will not reach the vast majority of people inside Myanmar.

Channels for sending anything from food and medicines to fighters and weapons through the Thai border with Myanmar have existed for decades. It is, therefore, likely that medical and other aid is already being moved through these channels into Myanmar.

But Myanmar needs medical aid on a massive scale to battle the pandemic and for this to be transported across the Thai-Myanmar border would require a degree of co-operation from the Thai government.

However, such support may not be forthcoming. Thailand, in common with Myanmar’s other neighbours and fellow ASEAN member-states, has not spoken out against the military coup, especially since Prime Minister Prayuth Chan-ocha, a former army chief himself, came to power via a military coup in 2014.

Yet it is not just dictators who use medical and other humanitarian aid as weapons of war. Democracies do it too. Much of the US aid to Afghan refugees living in camps in Pakistan, for example, was in the form of dollars and weapons that were channelled through Pakistan and the Inter-Services Intelligence to the Afghan mujahideen.  A small amount was disbursed through NGOs working in the camps. However, distribution was biased: food and medicines went to those whose sons and brothers joined the mujahideen group fighting the Soviets. In short, food was reward for joining the jihad.

Such actions can never be condoned, and during this escalating emergency, offering genuine aid with a true humanitarian purpose has never been more crucial.