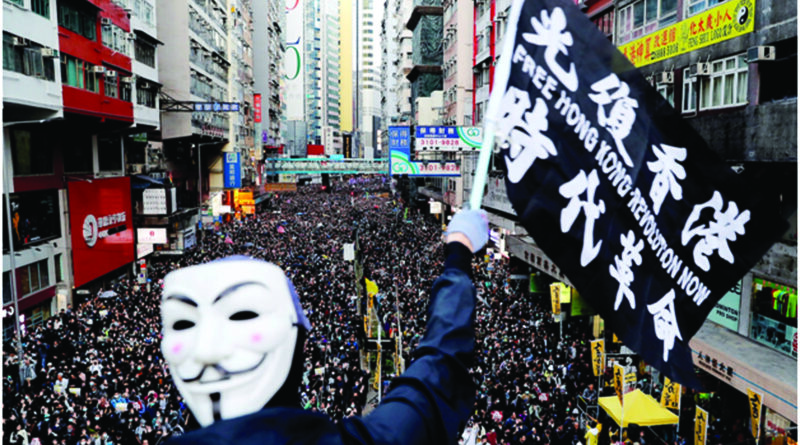 Living in fear: Hong Kong after the clampdown

A mood of high anxiety has been hanging over Hong Kong since the National Security Law (NSL) was imposed on the city in June 2020. One brave citizen tells Asian Affairs how it casts a shadow on every aspect of life

The National Security Law, imposed on Hong Kong by Beijing, bans acts of secession, subversion, terrorism and collusion with foreign forces. It has resulted in the arrest of dozens of opposition figures and activists. Earlier this year, Beijing also introduced a massive overhaul of Hong Kong’s electoral system to ensure only ‘patriots’ can run the city.

Speaking publicly to the media can have severe repercussions. Nevertheless, one young person in Hong Kong agreed to answer Asian Affairs’ questions about what is going on in the city. We have chosen not to disclose their name, or details of their work.

Can we start by discussing the education sector? The anti-government protests of 2019 started among students. There was also support from many lecturers. How do you think the mood in the universities has changed?

Universities no longer offer students a safe environment in which to discuss political issues. There is no freedom of speech. Political slogans, posters and articles on the campus notice board have been removed. The relationship between school management and students has been affected. Trust has been eroded.

Are teachers and lecturers changing the content of their courses?

Definitely. They avoid material related to political issues since they are afraid that some people may misinterpret their words and report them to the National Security Department* of the Hong Kong Police Force.

Are students adopting a different approach to study?

Students are avoiding political-related topics. Also, Hong Kong’s universities tend to be biased towards China in terms of teaching and management. For example, some universities have professors from China serving as principals or vice-presidents and now plan to set up branches in Shenzhen or Beijing. National security education is on the curriculum and the bias towards China is getting worse.

Several other countries have responded to the clampdown in Hong Kong by offering some citizens visas to work abroad. What do you think about the offer of visas from countries such as Canada, Australia and the United Kingdom?

I am glad to have these offers. They show that people in other countries are supporting the people in Hong Kong; they are trying to save us. They provide a way for the people who are under political persecution to escape from Hong Kong. Personally, I would need permission to go abroad even for a short holiday or study trip because my closest friend is involved in an NSL case, so I have been placed on a watch list.

What do you think about the idea of leaving Hong Kong and working abroad permanently?

I feel sad that the Hong Kong people are trying to leave the city where we grew up, never to return. It is like abandoning the causes we have fought for. I understand the people who are leaving Hong Kong but I am just not willing to see mass migration.

Let’s talk about work. How do you think the new security laws might affect your career?

I was planning to work in the education industry in Hong Kong, but due to the political situation, I don’t see any future in terms of teaching students. Everything now has to follow the book. Teachers must sign documents promising to uphold professional ethics in the future. I must be cautious in my words and deeds, including paying attention to what I say on social media, suppressing the original right of freedom of speech. I don’t want to work under a bunch of red lines. I have to worry about whether what I say might lead to losing my job or being arrested.

Do you have any examples of young people who have had trouble at work because of the security laws?

My closest friend got fired because the National Security Department arrested him. Before firing him, his boss was under considerable pressure.The company said he can longer commit to his work duty.

In June 2021, the Hong Kong newspaper Apple Daily was forced to close and police arrested several of its executives, some of whom have been charged with conspiracy to collude with foreign forces. Do you think that incident has affected the news and information you receive about Hong Kong?

Due to the closure of Apple Daily, Hong Kong has lost media that dared to criticise the government. The remaining media coverage is not as extensive as Apple Daily, so we are getting less news and information.

How easy is it to obtain and use a proxy server to access news online? Is it safe?

In Hong Kong, we don’t have to use a proxy server to access news online yet. Instead of using a proxy server, most people are using a VPN for security reasons. Both of them can hide the actual IP address to protect the privacy of the client. Hong Kongers are getting used to using these server applications.

How do you feel about sharing ideas online on social media?

Sharing ideas online on social media is not as easy as before since I don’t know where the red lines are and if I said something which is regarded as ‘wrong’ by the police, I may get into trouble. I hate self-censorship, so I no longer share opinions online.

Some people say that they have changed their friendships or even their romantic partners because of the new political environment. Has the NSL affected your personal and social life?

I have grown more distant from people who hold different political opinions to me. It is not because I can’t take various views; it is because I don’t know whether that person will report me or not.

Do you now choose different places to go and different people to meet compared to before?

I definitely do not go into China because of safety issues. I don’t believe that all the people in China are brainwashed by the CCP. Nevertheless, the first time I meet them, I will keep my distance, just in case.

* Footnote: Since November 2020, the National Security Department has operated a reporting hotline and encouraged members of the public to provide information relating to alleged breaches of the NSL