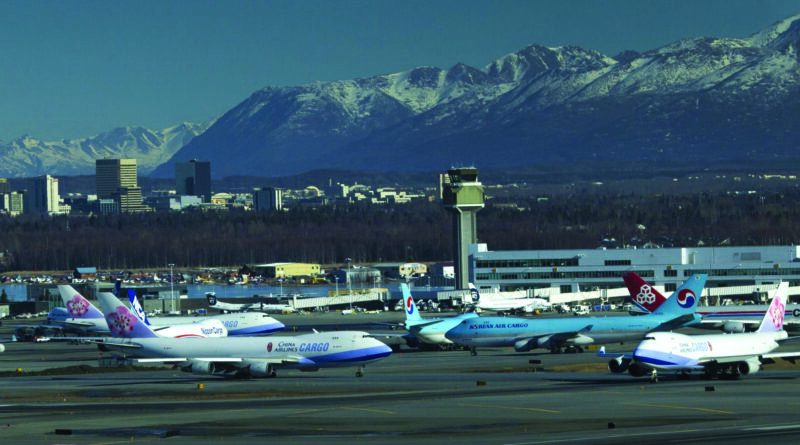 For a few months last year, the prize for the busiest airport in the world slipped away from those great hubs of Atlanta, Hong Kong and London.

The highest volume of air traffic flew in and out of the remote American city of Anchorage in southern Alaska, with a population of less than 300,000.

Almost all was cargo, not impacted by Covid restrictions that had grounded passenger flights. The aircraft brought computers, phones, pharmaceuticals, garments into the American market from Asia.

Nearly every iPhone sold in the US would have gone through Ted Stevens Anchorage International Airport. In the other direction went planeloads of food, agricultural produce, raw materials and other exports to booming Asian economies.

‘We will build whatever is needed to get the optimum benefits from trade with Asia,’ Alaska’s governor Mike Dunleavy told Asian Affairs.

This remote Arctic region is becoming a pivotal arena of competing powers.

The global couriers, FedEx and DHL, are expanding their warehouses in what they see as their Asia hubs. Huge cold storage facilities are being built, and airlines from Japan, South Korea and many from China, too, are signing contracts, despite ongoing talk of a new Cold War.

The rapid rise in trade in this far northern region coincides with rising rivalry between Moscow and Washington and this remote Arctic region is becoming a pivotal arena of competing powers. China, too, which claims to be a ‘near-Arctic’ state, is cooperating closely with Russia, particularly in areas of energy and shipping.

As climate change melts ice and opens sea routes between Asia and Europe, analysts are comparing this once frozen wasteland to the Middle East in the early 20th century, when the discovery of oil transformed that region in ways that continue to impact all our lives.

Maps of Alaska and the Northeast Asia region offer a global projection often missed in political and trade debates.

The March Sino-American summit in Anchorage between senior foreign policy officials was diplomatically chilly, but it did focus minds on the geography.  The city was chosen because it lies midway between Beijing and Washington DC.

The same projection shows Northeast Asia’s proximity to Europe through the northern sea routes which link the Atlantic and Pacific oceans.

Last year, some 33 million tons of cargo transited this route, which is being dubbed as the new Suez or Panama Canal. As ice continues to melt and more freighters are custom-built for Arctic conditions, predictions are that tonnage could reach 80 million by 2024 and 130 million by 2035.

‘People want to use these sea routes because it cuts some couple of thousand nautical miles off the route between Europe and Asia,’ explains Robert A. Gillam, chief executive officer of McKinley Management, which specialises in Alaska and global investment.

‘A significant amount of our future will be supporting new infrastructure for air cargo transport and seaborne cargo between the American and Asian economies.’

Much of the sea routes runs along the Russian coastline.

To the west, Kirkenes in northern Norway is the first port outside of Russia. Expansion plans are underway to link Kirkenes into the European rail network. Dropping off and picking up cargo there would shorten sailing distances even more.

To the east, there are expansion plans for the Alaskan port at Nome and, possibly, at the more useful deep water one of Port Clarence.

With a sparse population and huge distances, it would be many decades before Alaska has the rail infrastructure that could feed the North American market.  Both Port Clarence and Nome would be mainly supply and refuelling ports – what is referred to as ‘gas and go’ stops.

The figures of Alaska’s trade underpin the importance of the Asian markets. They account for some $3 billion against $1 billion for the European Union and just $18 million for Latin America and the Caribbean.

As Asia’s demand rises, so do Alaska’s exports, with China taking 21 per cent of the total. Its resources are vast, particularly fossil fuels, timber and raw minerals including those needed for renewable energy and rare earths used in fibre optics, lasers, superconductors and more.

This pattern of Northeast Asian trade is nothing new. Archaeological digs in Alaska have uncovered objects dating back a thousand years, showing evidence of contact with Russia, China, Japan and Korea.

The Danish explorer Vitus Bering, leading a Russian expedition, discovered Alaska in 1728, and gave his name to the Bering Strait, the stretch of water that separates America and Russia.

Until 1867, Alaska was under the control of Russia which, cash-strapped at the time, sold it to the US government.

In 1905, Tsar Nicholas approved the building of a bridge crossing over the Bering Strait, an idea that has never been implemented, but was endorsed by Moscow in 2008 and again in 2011.  The Beijing Times has reported that a similar project sits on China’s infrastructure drawing board.

To happen, however, there would need to be agreement and funding from global powers that, at present, are becoming more hostile towards each other.

After the 1867 Alaska Purchase, the new US-Russian border remained open with traders and indigenous Russians and Alaskans crossing at will. It has been closed since the Cold War and became known as the Ice Curtain.

China, Europe, Russia and the United States are now rubbing up against each other in the Arctic region.  Russia has declared the Arctic as key to its future. Europe is bolstering its defences. China, which does not even hold Arctic territory, plans to build a ‘Polar Silk Road’ there, while the US has pledged to keep the Arctic free.

Robert A. Gillam believes the way to reverse this friction is through trade and building infrastructure to support it.

‘When people get together and make economics, it tends to smooth a lot of ruffled feathers,’ he says.  ‘Better economics will drive stability and that opens up opportunities for compromise.’

Governor Mike Dunleavy doubts a Bering Strait crossing between Alaska and Asia will happen in his lifetime, but he adds, ‘There is always hope’”

Despite political tensions, he remains full square behind bolstering trade facilities. ‘We want to trade. That’s what we’re all about. We will continue that process while always keeping in mind the perspective of national security.’

Humphrey Hawksley is an Asia specialist and former BBC Beijing Bureau Chief. His latest book, Man on Fire, is based in Alaska.