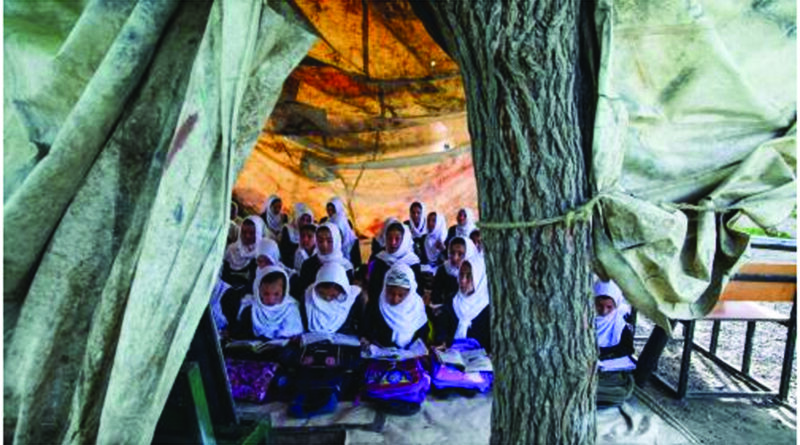 The Taliban’s return to power in Afghanistan, following the withdrawal of US and NATO forces, has been swifter and more comprehensive than most people predicted.  Nicholas Nugent considers the country’s future under the new regime

Former British prime minister Harold Macmillan is said to have advised his successor: ‘As long as you don’t invade Afghanistan you’ll be absolutely fine.’  With a keen sense of history, Macmillan knew that Afghan forces had defeated invasion forces from British-ruled India twice in the 19th century.

The Afghan Church in the Colaba district of Mumbai was built by the British in memory of the thousands of British soldiers who lost their lives in the first Anglo-Afghan war of 1839-1842. Yet defeat did not stop the British trying again to conquer Afghanistan – in 1878 – as part of what would be dubbed ‘the Great Game’, a competition with Russia to gain ground and influence in Central Asia.

President George W. Bush did not have the same sense of history when he ordered US forces into Afghanistan 20 years ago. But he was not trying to conquer territory or even to challenge the Taliban government’s implementation of harsh Islamic justice. He was punishing them for giving succour to another Islamic group, al-Qaeda, which had attacked New York and Washington in the notorious events remembered by the date, 9/11, killing nearly 3000 people.

Internationally, there was widespread support for President Bush’s action, including from then British prime minister Tony Blair, and leaders of other NATO countries who thought the US reprisal was justified.

In the mid-1990s,the Taliban brought peace and stability to a country racked by years of fighting between mujahedin warlords. Their mistake was to allow Osama bin Laden to operate from Afghan soil. With US support, the Taliban were ousted from power, to be replaced by the Northern Alliance group of mujahedin warriors.

America’s mistake was to exclude the Taliban – considered to be pariahs – from the series of international conferences on Afghanistan starting in late 2001 in the German city of Bonn. These gatherings aimed to devise a new system of government and rebuild a country already ravaged by more than 20 years of war.

Fast forward to 2019, when US President Trump, intent on fulfilling an electoral promise to withdraw American troops, initiated talks with the Taliban in Qatar, in the expectation of drawing them into a power-sharing government in Kabul. The US embarked on a process of  ‘humanising’ the Taliban, prioritising peace over sanctioning the former enemy, according to Hameed Hakimi of London’s Chatham House thinktank.

President Trump spoke personally on the phone with Taliban leader Mullah Abdul Baradar, granting respectability to a man the US previously defined as a terrorist. Baradar, who co-founded the movement and served in the previous Taliban government, is expected to head the new administration in Kabul.

In Doha, the US concluded an agreement with the Taliban which involved the removal of foreign forces and a Taliban promise not to attack withdrawing US forces. There was little chance of the movement fulfilling another plank of the deal: to engage in direct talks with the elected government, who had been excluded from the negotiations. ‘The February 2020 deal was an exit deal, not a peace deal,’ says Mike Martin, a former British army officer turned academic, who served in Afghanistan.

It fell to President Joe Biden to implement the Doha deal. As President Obama’s deputy, Biden opposed the 2009 ‘surge’ to reinforce US troops. As president, his determination to end what he called the US’s ‘forever war’ led to an over-hasty drawdown of remaining forces. This may have pleased the American public but it undermined 20 years of development in one of Asia’s most backward countries.

I visited Kabul soon after the Taliban took control of Afghanistan in 1996, forming a government which only Pakistan, the UAE and Saudi Arabia recognised. Earlier I witnessed mujahedin warlords Gulbuddin Hekmatyar and Abdul Rahim Dostum cause untold loss of life and destruction in a battle for Kabul. With the city’s airport closed, I entered the country from Pakistan and made my way to Kabul by road. The Taliban had ensured the road was secure by disarming the mujahedin. It was not a period of joy, however, and in Kabul and elsewhere there were no women to be seen anywhere. These were very dark days.

When my passport was sent to the foreign ministry for the required exit visa, I was summoned to attend in person. I thought maybe I was in trouble for entering on a visa issued by the consulate in London, still controlled by the previous mujahedin government of Professor Rabbani.

But my offence was not to have had my passport stamped when I crossed the frontier from Pakistan. There was no official at the border and for my infringement I was given a severe dressing down by the Taliban deputy foreign minister in charge of such things. Still, I got off comparatively lightly and was allowed to leave the country.

It is too early to say how a second period of Taliban rule will differ from that of 1996-2001. The fundamentalist movement appears to have learned lessons, promising to allow girls to attend school and women to work, though such promises have been qualified: for example, girls may go to school ‘up to age 12’ and women’s rights will be respected ‘within sharia’.

The Taliban know there is international hostility to their regaining power through force of arms after a vicious civil war. They may,therefore, tone down some of the more oppressive restrictions that have alienated other countries even in the Muslim world – perhaps by not enacting vengeance against those who served the previous government or worked for foreign missions. Afghan media mogul Saad Mohseni, who owns Tolo TV, has seen signs they may settle for what he calls ‘sharia lite’.

However, it is questionable whether the Taliban will be able to unite the country. The movement’s origins are in the Pashto-speaking south and its methods and lifestyle owe more to Pashtunwali, the Pashtun code of conduct which stresses hospitality, honour and revenge, than to Islam. Afghanistan is very tribal and Dari (or Persian) speaking northerners of Tajik, Uzbek or Hazara ethnicity will find it hardest to adjust to Taliban rule. In fact, there are signs of a new ‘Northern Alliance’ coalescing in the Panjshir Valley.

Afghanistan has been transformed over the past 20 years, as I have observed on subsequent visits. Women play a full role in public life, including in senior positions in government, the judiciary and education, without being required to wear a burka or veil. Girls enjoy the same right to education as boys. International telecommunications have arrived and television, previously banned by the Taliban, is ubiquitous, while the supply of electricity and internet connections are stable in cities. Will the restoration of an Islamic Emirate necessitate a reversal of the reforms which democratic government and international assistance have ushered in?

It is tempting to conclude that the clock of reform and modernisation will now move into reverse. But as we ponder the extent to which the Taliban will change Afghanistan, it is just as relevant also to consider how modern Afghanistan will change the Taliban.

Nicholas Nugent has visited Afghanistan under all regimes, most recently to train Afghan journalists. He is a student of Islamic law