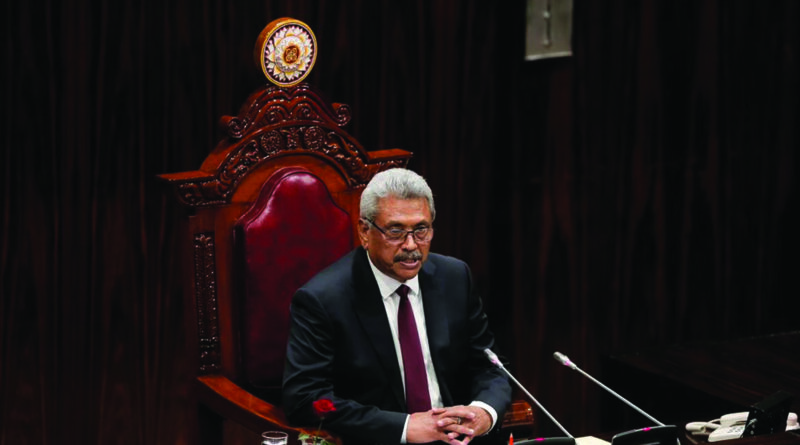 Sitting on a time bomb

President Gotabaya Rajapaksa’s address to the nation on 20 August echoed with a sense of foreboding. He warned that Sri Lanka should be ready for more sacrifices. That same day, 195 of its citizens died of the Covid-19 virus, making Sri Lanka South Asia’s highest in terms of average Covid-19 deaths.

What further sacrifices are expected from the Sri Lankan people,already battered and pummelled by an economy teetering on the edge of an abyss, with its foreign reserves fast running dry and the Central Bank desperately printing local currency to meet rupee commitments, was not spelt out.

Most of the president’s address was devoted to detailing what he has done to save the nation from a pandemic that is a global phenomenon for which he is not responsible. And indeed, he cannot be blamed for some of the recent catastrophic happenings, such as the foreign flagged ship ‘X-Press Pearl’that went down burning off Sri Lanka’s coast in early May.It released poisonous chemicals and tens of thousands of plastic pellets, killing hundreds of marine creatures – dolphins, whales, turtles and fish –in an environmental disaster that the island will have to live with for decades, adding more woes to people’s livelihoods.

Still, President Rajapaksa’s self-glorification, taking the credit for some of the actions taken to combat the pandemic with an ‘I did this’ and ‘I did that’ speech does not seem to have gone down well with a public struggling to survive.

They have seen rising prices of commodities, medicines and fuel, and shortages of daily essentials, which have forced the government to turn to Pakistan for the dietary staple, rice, and to India for oxygen as doctors and health workers fight to save lives in overwhelmed hospitals,where patients sleep under beds and in corridors, and bodies are stacked in container trucks as four Delta mutations take their toll.

At the time of writing, Sri Lanka is under a 12-day lockdown until 30 August, with the prospect of that being extended if the battle for control over a mutating virus becomes unmanageable.

Sri Lankans have seen rising prices of commodities, medicines and fuel, and shortages of daily essentials

For weeks the government resisted calls by medical experts for a lockdown as the death toll rose rapidly, with the ever-present danger of the virus spreading from the highly populated and urbanised western province, with its luxury hotels and administrative and financial hub, to the other eight provinces.

Although in recent days the armed forces, particularly the army, have mounted a successful vaccination campaign, with mobile services even visiting people’s houses to provide jabs, the initial error of handing over leadership of the battle against Covid to the military instead of qualified professional medical experts has proved a serious error of judgment.

A few days after the government’s first anniversary last month, President Rajapaksa reshuffled his cabinet, replacing the health minister with the media minister. Given the mounting criticism by several medical associations of the government’s stubborn resistance to professional advice, this was an ideal opportunity to appoint a qualified medical professional at the apex of the health ministry. It should rightly have been the lead institution in the anti-Covid battle, which medical experts say is likely to worsen this month.

But the president and his close advisers squandered that opportunity. The administration failed to correct the previous errors that have driven it against a wall, with the military fighting the wrong war.

Only a few weeks earlier, the new health minister in his previous incarnation reportedly told journalists that the government can only vaccinate its people and the rest was ‘up to God’.

A health minister who, at the height of a crisis in which Sri Lanka rose to 13th place in the global Covid daily fatality rankings, just behind the US, seeks divine intervention is hardly likely to win public confidence.

But the problems will not cease by the end of this year. In 2022 Sri Lanka has $5 billion worth of sovereign liabilities that mature and which Colombo needs to settle. Add to that another $4-5 billion every year for the next five years, according to one economist.

To adapt the words of poet TS Eliot, September will be ‘the cruellest month’,and not just because of an anticipated surge in Covid casualties and an economy which is at tipping point.

It is then that Sri Lanka must also face the slings and arrows of the UN’s Human Rights Commissioner Michelle Bachelet. She is due to present a report on Sri Lanka to the Council sessions in Geneva in September, which is hardly expected to be a salutary acceptance of Colombo’s record on human rights, accountability, constitutionally guaranteed freedoms and ethnic reconciliation.

Instead of pursuing accountability and other promises Sri Lanka had made to the UN, the Gotabaya Rajapaksa government presented a Rambo-like persona to the international community in the belief that obsequiousness to China will save the day.

A key change in the cabinet reshuffle was the return of Prof.GL Peiris, a reputed legal academic, as foreign minister in a belated clean-up of the government’s messy and one-sided foreign policy, cobbled together during its year in office.It abandoned Sri Lanka’s traditional non-aligned policy, which had served it well, for a fake neutrality that replaced the initial commitment to an ‘India First’ policy, only to end up serving China’s interests.

China’s ever-growing footprint in Sri Lanka, and repudiation of assistance from the US, such as the Millennium Development Compact, agreed to by the previous government,is evidence that the claim of neutrality is only a pious platitude.

With the Human Rights Commissioner, the US Congress and the European Parliament breathing down the Rajapaksa government’s neck in what seems like a pincer move to hold the country accountable for its commitments, the new foreign minister is expected to present a more amiable face to the West in Colombo’s desperate search for foreign direct investment and international support to weather the impending storm.

How any administration expects to win friends and influence nations when its public acts are an evisceration of constitutional rights and freedoms, the rule of law and a diminution of judicial integrity and independence,with the pardoning of judicially-convicted murderers, arrests of trade union leaders for street demonstrations and harassment of journalists, beggars belief.