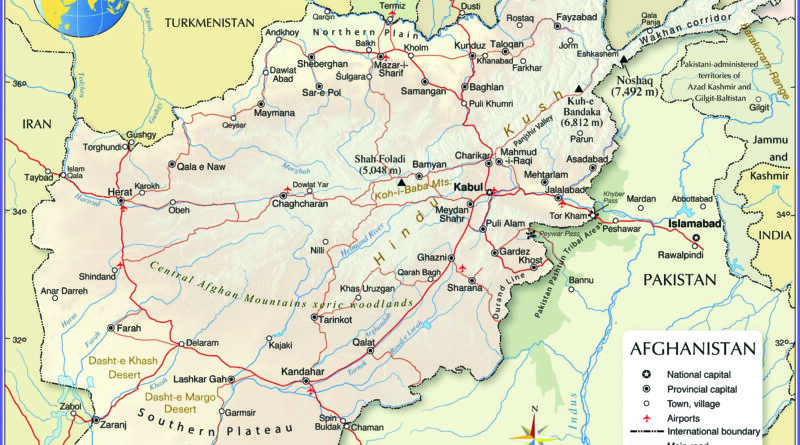 A Great Game for the 21stcentury

The Taliban’s rise to power in Kabul has shifted the balance of power in the region, in Asia and potentially the world, as Nicholas Nugent reports

When the time comes to write the history of the early 21st century, the date 15 August 2021 will feature prominently. That was the day Kabul fell to the Taliban – although Afghanistan’s new rulers prefer to characterise it as the day they defeated the United States.

That characterisation would not be wrong. It was the US which drove the militant group from power in 2001 as punishment for giving a home to Osama bin Laden’s al-Qaeda movement. Twenty years of fighting later, the Taliban have gained their revenge by driving out American forces and the country’s elected government.

Victory by the fundamentalist movement from Afghanistan’s southern Pashto-speaking region, with a mere 35,000 men under arms, was so comprehensive it drew comparison with the ignominious retreat of the US Army from Vietnam in 1975, from communist forces who went on to capture Saigon. As in Vietnam, the Taliban have changed both the government and the ideology of the nation.

Afghanistan emerged as an independent nation just over 100 years ago after a power struggle between Russia and Britain, who were both busy building empires in Asia. That struggle brought Britain into major wars with Afghans on three occasions in the nineteenth and early twentieth centuries. Afghans had skirmishes, too, with Russian forces along the River Oxus, known now as the Amu Darya, which marks much of Afghanistan’s northern border. The British poet Rudyard Kipling dubbed the struggle for control of central Asia ‘the Great Game’.

By its end, Russia held sway over the present day ‘stans’ which later became part of the Soviet Union. Having resisted colonisation, Afghanistan became a buffer state between the two powers. Its northern border was carefully drawn with the so-called ‘panhandle’ – the Wakhan Corridor in Afghanistan’s Badakhshan region – extended eastwards to Chinese-ruled Xinjiang, to keep the warring Russians and British apart.

When I first visited Afghanistan, in the gentler days of the 1960s when King Zahir Shah was on the throne, the country’s buffer status was reflected in peaceful rivalry between the Soviet Union and the United States, who both exercised influence through aid – what we would now call ‘soft power’. American wheat was dried in Soviet-built silos and buses gifted by America were driven on Soviet-built roads. The Soviet Union built Kabul International Airport and America responded by building a snazzy airport at Kandahar – famous for being grander than the country’s second city merited.

Rivalry intensified in 1979 when the Soviet Union invaded in support of the Marxist-Leninist People’s Democratic Party (PDPA), which had taken power the previous year, ousting the monarch. The invasion shored up defence of the USSR’s ‘soft underbelly’, where its Turkmen, Uzbek and Tajik republics bordered Afghanistan.

Soviet occupation provoked an Afghan jihad or holy war against the invading ‘infidels’. By arming the mujahedin, the United States fuelled the jihad, leading to a proxy war between the US and USSR. Soviet forces remained in Afghanistan for ten years, and the government they left in place fell to a mujahedin onslaught.

Later – after the Soviet Union fell apart and Central Asian republics became independent – it was the turn of the United States to invade the country, capturing members of al-Qaeda who had attacked the US on 9/11 and ousting the Taliban government that had given them a home.

The wheel has turned full circle now the Taliban have ousted the Americans. Three powerful nations – Britain, the Soviet Union and the US – have each in turn been seen off by Afghan warriors.

So who among the regional and global powers will exercise most influence over the new government in Kabul?

For Pakistan, which gave the Taliban sanctuary across the border, the Taliban’s return to power is a gain, while, conversely, it is a loss of influence for India, which offered much support to the previous government and now fears the Taliban turning their attention to the disputed territory of Kashmir. Pakistan is said to be hoping that both Afghanistan and China will join it in a loose alliance aimed at wresting from India the part of Kashmir Islamabad does not already control.

As many countries (including India) closed their embassies in Kabul, China said its missions would remain open and it would work with the Taliban. Pakistan, Saudi Arabia and the UAE, which recognised the previous Taliban government, are also expected to work with the new regime, as will Qatar, where the Taliban’s representative office is located. And, despite ideological differences, neighbour Iran is feeling more comfortable following the withdrawal of US troops.

As for Russia, it is hoping to regain some influence, whilst being wary of the risks of both Islamic fundamentalism and illegal drugs entering across the Amu Darya. Opium, of which Afghanistan is the world’s major producer, is readily available on the streets of Moscow.

But the overwhelming victor in the influence game, the new ‘Great Game’, is China. Author William Dalrymple, who has written a book on Afghan history, told the BBC that Afghanistan has ‘fallen under Chinese hegemony’, adding: ‘it will probably be there for 100 years’.

China has already committed $13 billion to Afghanistan for road-building, energy supply and low-cost housing under its Belt and Road Initiative. This is unlikely to be upset by the change of regime in Kabul. In July, Taliban leaders were invited to meet China’s Foreign Minister Wang Yi, suggesting Beijing was more prepared for the Taliban’s rise to power than countries with troops on the ground there.

Moreover, China won a pledge similar to one the Taliban made to the US in the 2020 Doha deal: not to allow Afghan territory to be used to stir up agitation in China, which fears support for the East Turkestan Islamic Movement (ETIM) fighting for Islamic government in Xinjiang.

As the Taliban develop relations with their new best friends, the significance of the 90km Afghanistan-China frontier comes into focus. Despite the absence of any connecting road through the mountainous terrain, the border gives Beijing something no other power has: direct contact with its client state. We can expect China to make the most of that frontier ‘touching point’, giving infrastructural support to Afghanistan as it has to Pakistan. Investing in northern Afghanistan’s oil and gas resources, as well as its precious stones and agricultural produce, will benefit both countries.

And in a topical application of ‘soft power’, China is already helping Afghanistan, Iran and Pakistan to fight Covid-19 by providing vaccines.

In light of such developments, the United States and India may be out in the cold for a generation while China exploits in full its geographic advantage towards its southern buffer state. Without having to fight even one battle, China, it seems, is the victor in this Great Game for the 21st century.

Nicholas Nugent has visited Afghanistan under all regimes, most recently to train Afghan journalists. He is familiar with the borderlands of northern Afghanistan