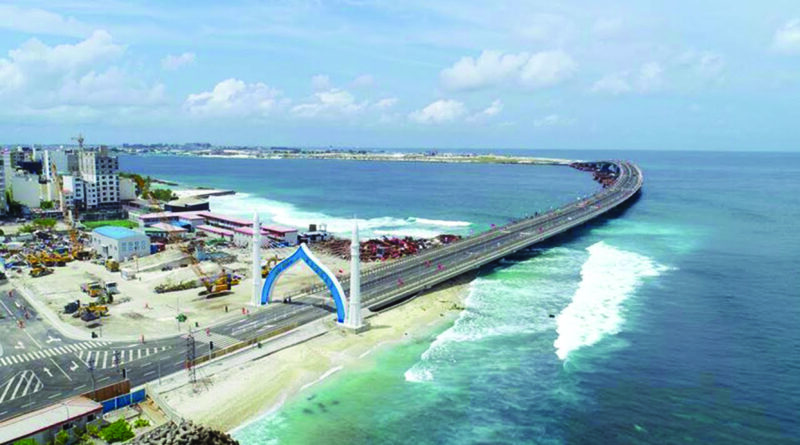 A new infrastructure project should further strengthen New Delhi’s ties with Malé – but, warns Sudha Ramachandran, anti-India sentiment is still brewing in some quarters of the archipelago

The India-Maldives relationship, which has been on the upswing since the Maldivian Democratic Party’s Ibrahim Solih won the presidential election in 2018, has received another shot in the arm with the two countries’signing of an agreement on development of the Greater Maldives Connectivity Project (GMCP) on August 26.

Under the pact, Mumbai-based Afcons Infrastructure will construct a 6.74 km-long bridge and causeway link connecting the Maldivian capital Malé with the neighbouring islands of Villingli, Gulhifalhu and Thilafushi. In addition, the GMCP involves construction of a port at Gulhifahu and an industrial zone in Thilafushi.

An archipelago of 1,192 islands strewn across the Indian Ocean, the Maldives lies near vital sea lanes linking West Asia with South, Southeast and East Asian markets. The Maldives’ geo-strategic significance has made it the focus of attention for several powers, including the United States, China and India.

While India has had strong political, economic and military relations with the Maldives for several decades, China is a much more recent player, having set up a diplomatic mission in the archipelago just ten years ago. Nevertheless, within this relatively short time span, Beijing has come to wield significant clout in Malé. During Abdulla Yameen’s presidency (2013-18), Beijing emerged as the Maldives’ top trading partner, extended the Maldivian government huge loans and built several infrastructure projects, including the Sinamalé Bridge.

Growing Maldivian debt and dependence on China was of concern to India as it raised the possibility of a debt-trapped Maldives giving in to Chinese demands for a naval base in the archipelago, which would impinge on India’s security. But there was little Delhi could do when Yameen was at the helm in Malé.

Maldivian nationals will comprise the labour force on the GMCP

But with Yameen’s defeat in the 2018 presidential election, India’s ties with theMaldives have strengthened significantly on multiple fronts. In February this year, the two countries signed a defence Line of Credit agreement worth $50 million for capacity building in the maritime domain. In addition to strengthening bilateral coordination on regional maritime security, the two countries will work together on combating terrorism in ‘all its forms and manifestations’.

Moreover, India’s role in the Maldivian economy and infrastructure has grown and the GMCP is representative of this robust cooperation.

Not only is the GMCP the archipelago’s biggest infrastructure project, it is also India’s biggest development project in the region. In addition to reducing the Maldives’ dependence on the sea for commuting between islands, the project will contribute to the economic development of other islands and ease the population pressure on densely populated Malé.

Unlike China, which extends costly loans and employs its own nationals on Belt and Road projects, India’s engagement with the Maldives is less exploitative. Maldivian nationals will comprise the labour force on the GMCP, and India is funding the project: $100 million will be in the form of a grant and $400 million as a Line of Credit. The latter carries a 1.7 percent interest rate and is returnable in 20 years with a five-year grace period.

Of course, the GMCP will benefit India too. In addition to easing China out of the Maldives’ infrastructure sector and enhancing its own profile in the archipelago, it should earn New Delhi public goodwill in the archipelago.

However, it is too early for India to celebrate.Trouble is brewing in the Maldives as anti-India forces are mobilising against New Delhi’s heightened presence in Maldives.

Over the past year, an ‘India Out’ campaign on social media and the streets of Malé has roiled the waters. Questions have been raised in parliament over details of the defence pact signed between the two countries, while a section of the Maldivian media has conducted a vilification campaign against Indian High Commission personnel.

It could be domestic politics that are driving the ‘India-Out’campaign. The Maldivian Democratic Party (MDP) is regarded as very much pro-India, and India’s rising profile has provided the opposition parties with a convenient stick with which to beat the party.

Another likelihood is that those who benefited from Yameen’s pro-China policies could be behind the anti-India campaign. And there is a China angle to the protests too – the possibility that China is funding or fuelling the protests to break India’s growing role in the Maldives cannot be ruled out.

However, India would do well to avoid dismissing the ‘India-Out’ campaign purely as something that is being orchestrated by vested interests. Some of those participating in the campaign are concerned over the provisions of the defence agreement, fearing that the pact contains secret stipulations that undermine the Maldives’ sovereignty. India must, therefore, ensure transparency in its dealings with the archipelago.

After all, it was corruption and a lack of transparency in Sino-Maldivian deals that toppled Yameen from power in 2018. So India should avoid going down the road that China trod.

There is also another issue that should worry India. Differences between President Solih and Mohammed Nasheed, Speaker of the People’s Majlis, are growing, despite both being respected leaders of the MDP. A rift in the party could severely impact the MDP’s prospects in the 2023 presidential election and the 2024 elections to parliament.

A divided MDP will not only undermine the party’s chances of returning to power; it could also prove a setback to India’s fortunes in the Maldives.