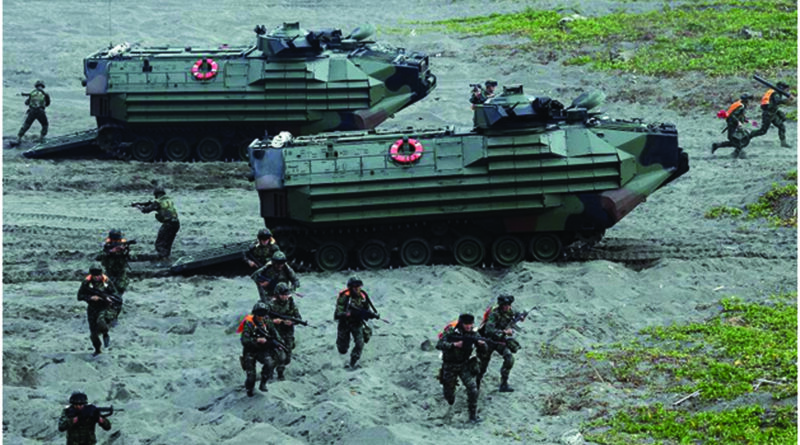 As Taiwan and Japan step up military exercises to counter likely aggression from China, a war of words is also escalating in the region.  Yvonne Gill reports

The month of September saw temperatures soar in the East China Sea region. Taiwan and Japan separately held large-scale military exercises, while the Koreans popped up with the North shooting a cruise missile or two from a mobile railroad launcher and South Korea testing a submarine-launched ballistic missile. But while the Koreas were the odd ones there, both Japan and Taiwan had a single agenda: defending their respective territories from a probable Chinese attack. Not surprisingly, the Chinese media took strong exception to the military exercises, slating the links between Taiwanese ‘separatists’ and Japanese conservative leaders.

Taiwan has held the annual Han Kuang military drills since 1984, although this time it was extensive and attuned to the heightened tensions with big brother China. The mock operations, aimed at meeting the threat of Chinese aggression, started off simulating an attack by China in eastern Taiwan, considered a weak link in the island’s defences. F-16V and Mirage 2000 fighter jets flew in war-like manoeuvres to ward off a supposed Chinese invasion across the Taiwan Strait.

What make the exercise so relevant was the fact that in the first half of September itself, 19 Chinese military aircraft have violated Taiwan’s air defence identification zone (ADIZ). Such incidents had taken place several times during the year and earlier, too.

Live-fire exercises were held across the main part of Taiwan as well as the outlying islands. The army, along with the navy and air force, demonstrated their lethal skills. Different potential assault scenarios involving missiles, landing operations, electronic, cyber and biological warfare were enacted and responded to by the Taiwanese forces.Biological agent containment and vehicles and equipment decontamination exercises were conducted in the southern city of Tainan. Soldiers ‘injured’ in the mock drills were rushed to nearby hospitals to be ‘treated’ by civilian doctors.

It was a comprehensive pre-war drill, effectively testing the battle-readiness of Taiwan’s 200,000-strong armed forces –a rather large military for a tiny island of 24 million people.

On the other hand,Japan’s Ground Self-Defence Force (GDSF) is staging two-month-long nationwide war games across its mainland and island territories, the most extensive exercises since the cold war. Authorities say the exercises aim to bolster deterrence and strengthen Japanese capabilities, in order to counter China’s growing assertiveness and to strengthen the defences of the remote Senkaku Islands in the East China Sea, claimed by China.

Some 100,000 personnel, 20,000 vehicles and 120 aircraft are participating in the drills. Japan’s Maritime and Air Self-Defence Forces, as well as a US Army landing ship, are involved.An aggressive component of the exercises was an expeditionary land-and-sea mission that started from Japan’s northernmost main island in the Tohoku region of north-eastern Japan to the Kyushu region in the south-west, where they were joined by a brigade from western Japan’s Shikoku region.

The Japanese want to assess how fast they can mobilise troops, vehicles, tanks and equipment from across Japan to the Japanese-controlled Senkaku Islands (or Diaoyu Islands, in the Chinese language). The island chain is claimed by China as its territory. One of the remotest southwestern islands of this archipelago is just 170 km from Taiwan and 330 km from mainland China.

These uncompromising military exercises should be seen against the backdrop of a growing number of voices in Japan and Taiwan, calling for a military alliance as the interests of both countries coincide in the wake of growing Chinese belligerence in the region. Japan’s Defence Minister, Nobuo Kishi, has openly been advocating for stronger and closer military ties with Taiwan along the lines of US-Taiwan cooperation.

The frustration of the Chinese commentator is not surprising, because the Taiwanese have been only too willing to reciprocate the Japanese gestures. The 2021 Defence White Paper issued by the Japanese government states that Taiwan is an important factor in Japan’s security, and it calls for closer defence cooperation. Japanese Deputy Prime Minister Taro Aso is on record as having stated at a fund-raising party of his Liberal Democratic Party (LDP) on July 6 that Japan, together with the US, will have to defend Taiwan against possible Chinese invasion. A cross-strait crisis, he feared, could lead to a survival-threatening situation for Japan.

In August, LDP lawmakers and those belonging to Taiwan’s ruling Democratic Progressive Party (DPP) held a virtual discussion on security concerns arising out of aggressive Chinese manoeuvring in the East China Sea. The legislators of the two ruling parties felt that joint coast guard drills could be a good beginning to promote cooperation in matters of defence and security.

The problem is that Japan, with its limited offensive capabilities, and Taiwan’s much smaller defence forces are pitted against a massive, nuclear-capable People’s Liberation Army (PLA). While Japan’s interest is to defend its remote islands and sea lanes vital to its economy, the Taiwanese face an existential crisis.

Taiwanese President Tsai Ing-wen has, therefore, been calling for an asymmetrical war strategy to fend off a Chinese blitzkrieg. Long-range missiles, the island’s experts say, provide the required deterrence and are cost-effective too. Taiwan’s Defence Ministry has allocated $8.67 billion for production of long-range missiles.The tiny island has already deployed more than 6,000 missiles but these have a short range and are not capable of reaching the Chinese mainland.In line with its new policy, Taiwan’s navy recent commissioned the Ta Chiang ‘carrier killer’, which bristles with anti-aircraft and anti-ship missiles and has a catamaran hull for fast, stealthy cruising.

The Japanese, too, are catching up and are planning to acquire and deploy long-range missiles. Chinese PLA aircraft intruding into Japan’s ADIZ and Chinese vessels sailing into its territorial waters around the Senkaku Islands is a way the Chinese have been asserting themselves, especially in disputed areas. As Tokyo’s defence white paper maintains that ‘stabilising the situation surrounding Taiwan is important for Japan’s security and the stability of the international community’, the country’s policy makers feel the current strategy of deterrence by denial might be insufficient to dissuade Beijing or Pyongyang from being reckless in times of crisis. The situation, it is widely accepted in that country, calls for aggressive defence. Only then would there be enough reason for the other side to be deterred in the proper sense.

The Japanese government is mulling over acquiring ground-launched variants of Tomahawks or medium-range ballistic missiles from the US. With a range of almost 4,000 km, these could easily strike deep into the Chinese mainland. News reports of Japan planning to deploy these missiles have been circulating in a section of the Southeast Asian media.

With the islands war hotting up in the Chinese seas, things could be heading towards an oft-tried resolution to balance out tensions: deterrence against deterrence.